It’s always breathtaking to see the band of the Milky Way under good viewing conditions. I remember so well the night I saw it best, about 20 years ago on a cold, absolutely clear night from a boat in the middle of Lake George. This is up in New York’s Adirondacks, and when I glanced up as we crossed the lake heading back to our hotel, I was simply stunned by the vista. When you contemplate what you’re looking at and think of yourself within that ghostly band, you feel somehow a deep connection to all the myriad processes that put us here as observing beings.

Now we have another fine view of the Milky Way, this time from TESS. The scientists working data from the Transiting Exoplanet Survey Satellite have just given us a composite drawn from 208 TESS images taken during the mission’s first year of science operations, which ended July 18. Have a look at the southern sky, and realize what while TESS has found 29 exoplanets thus far, another 1,000 or so are in candidate stage and being investigated. 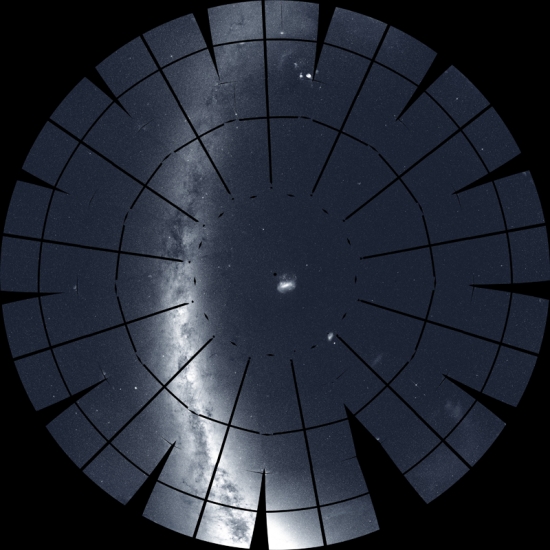 Image: This mosaic of the southern sky was assembled from 13 images taken by NASA’s Transiting Exoplanet Survey Satellite (TESS) during its first year of science operations, completed in July 2019. The mission divided the southern sky into 13 sectors, each of which was imaged for nearly a month by the spacecraft’s four cameras. Credit: NASA/MIT/TESS.

Lots of good things to see here. TESS has divided the southern sky into 13 sectors, each of which received almost a month’s worth of imaging by the four cameras aboard. The Milky Way’s band is easily recognized, but look in the center to see the Large Magellanic Cloud, and at the top of the image, you should be able to identify the Orion Nebula, a birthing place for stars.

Can you find Alpha Centauri in this image? Here’s a second image, one showing the confirmed TESS planets to date. I’ve inserted an arrow to identify our nearest star(s). 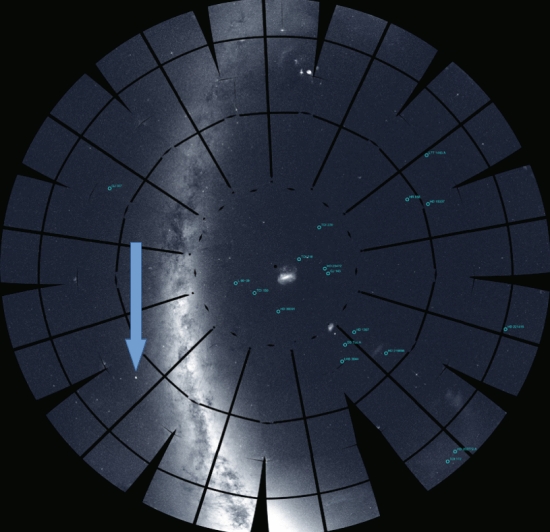 Image: The host stars of the 29 TESS planet discoveries to date are shown on this version of the southern sky mosaic. Credit: NASA/MIT/TESS and Ethan Kruse (USRA).

TESS is doing excellent work, capturing a full sector of the sky every 30 minutes as it hunts for exoplanet transits. In the first year of operations, its CCDs captured 15,347 30-minute science images. These make up a part of the more than 20 terabytes of southern sky data returned thus far. The TESS survey of the northern sky is now underway.