The holiday season seems an appropriate time to thank not only my Centauri Dreams readers for their continued high level of discussion in these pages, but also the army of citizen scientists who are out there working on everything from exoplanet detection to asteroid mapping. We saw recently how valuable the work of amateurs like Thiam-Guan Tan can be in confirming a possible exoplanet, while projects like the Habitable Exoplanet Hunting Project continue coming online to push the boundaries of what amateur equipment can do.

Now comes word of the signal contribution made to OSIRIS-REx and its mission to asteroid Bennu. You’ll recall that when the spacecraft arrived at the asteroid, the surface was found to be far more littered with rocks and boulders than anyone had foreseen. Finding a spot for landing and retrieving samples would be no easy task, but it was made substantially more manageable by a team of 3,500 people using their PCs to join in analysis and characterization of the asteroid surface.

These volunteers measured boulders and marked craters, eventually tallying over 14 million annotations of features on Bennu’s emerging global map. Behind all this work was CosmoQuest, a project based at the Planetary Science Institute in Tucson, Arizona.

“It is amazing that more than 3,500 citizen scientists participated in CosmoQuest’s project to map Bennu and help mission scientists find the best place for OSIRIS-REx to collect a sample,” said Pamela L. Gay, Senior Scientist and Senior Education and Communication Specialist at PSI. “This kind of a volunteer effort makes it easier to find safe places to sample and scientifically interesting places to explore.” 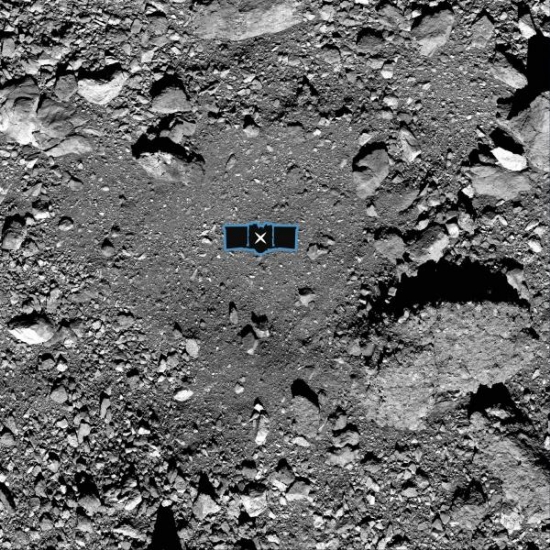 Image: This image shows sample site Nightingale, OSIRIS-REx’s primary sample collection site on asteroid Bennu. The image is overlaid with a graphic of the OSIRIS-REx spacecraft to illustrate the scale of the site. Credit: NASA/Goddard/University of Arizona.

During the four month period needed to complete the mapping, some volunteers marked more than 500 images (the average was closer to 10), with each image taking up to 45 minutes to complete. It seems worthwhile to list the usernames of those with the greatest number of contributions: MikeCassidy, Nilium, bc2callhome, zathras, joed, dpi209, and pattyg. PSI’s CosmoQuest team will continue working with the Bennu science team to generate science drawn from the mapping data now that the initial site selection has been performed.

If you missed out on the Bennu mapping but would like to get involved, CosmoQuest intends to be launching new citizen science projects some time in 2020, so keep an eye on the site. A good New Year’s resolution might be to get involved in one or more of the many sites catering not just to amateur astronomers but interested laypeople willing to devote time to image analysis. Have a look, for example, at Zooniverse’s list of projects on physics to get an idea of the range. It’s clear that space missions draw real value out of the kind of citizen participation that, not so many years ago, was limited to watching images on a television. Actually joining in efforts that can assist a mission or discover new worlds through its data is no longer a novelty. 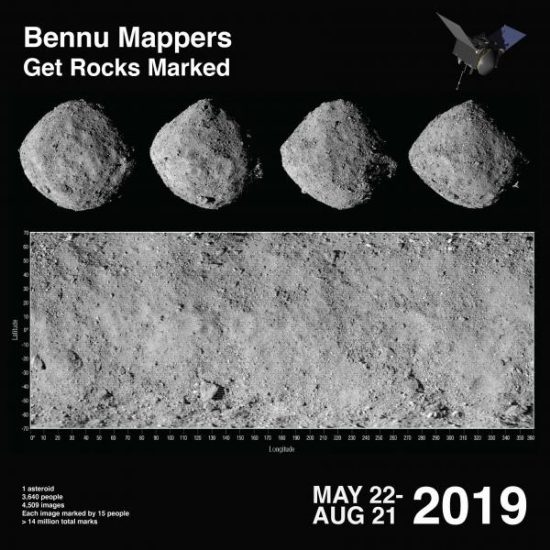 Image: All 3,640 names of the Bennu Mappers are superimposed on this Global Mosaic of the Bennu Asteroid that was acquired by the OSIRIS-REx Mission (the image has to be blown up several times to actually see the names). Credit: Created using sources images from NASA/Goddard/University of Arizona.

Let me wish all of you a wonderful holiday and an energized return to work when the season ends. Working on behalf of ideas one believes in is a high vocation. Let’s continue to focus in 2020 on pushing the seemingly intractable problem of interstellar flight forward with new ideas and clarifications of the old.

Next post: Bound in Shallows: Space Exploration and Institutional Drift