An Impact-Driven End to ‘Snowball Earth’?

The oldest preserved impact structure on Earth appears to be at Yarrabubba in Western Australia, where a magnetic anomaly about 20 kilometers in diameter has been interpreted to be a remnant of an original impact crater 70 kilometers across. Here, what had been an approximate age of 2.65 to 1.075 billion years has now been constrained to 2.229 billion years, making Yarrabubba 200 million years older than the next oldest impact.

A team led by Timmons Erickson (Curtin University) analyzed the minerals zircon and monazite at the site. Their sample showed shock recrystallization (in the form of so-called neoblasts) from an asteroid strike, the analysis of which allowed them to pin down the structure’s age. A paper just out in Nature Communications reports on the team’s use of uranium-lead (U–Pb) dating to investigate the age of the shock features and impact melt.

A global climate change may have occurred as a result of this impact, perhaps one with consequences for so-called ‘snowball Earth,’ a hypothesis of almost planet-wide ice cover in one or more periods before 650 million years ago. This impact conceivably ended the ice era. 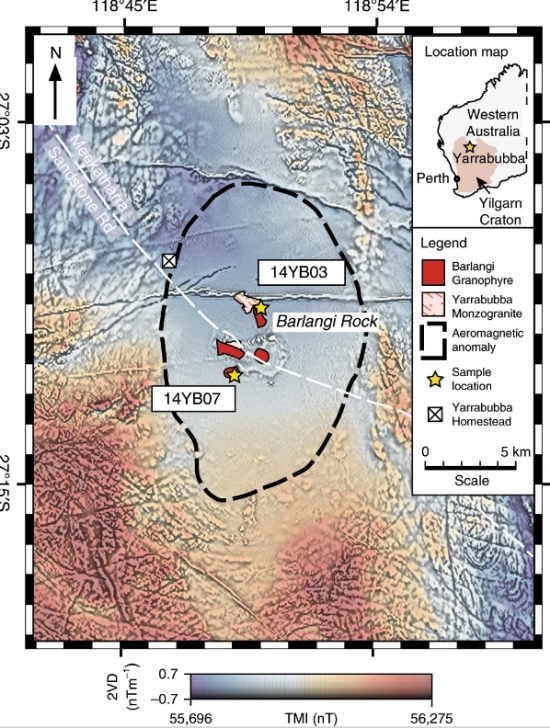 Image: This is Figure 1 from the paper. Caption: Composite aeromagnetic anomaly map of the Yarrabubba impact structure within the Yilgarn Craton, Western Australia, showing the locations of key outcrops and samples used in this study. The image combines the total magnetic intensity (TMI, cool to warm colours) with the second vertical derivative of the total magnetic intensity (2VD, greyscale) data. The demagnetised anomaly centred on the outcrops of the Barlangi granophyre is considered to be the eroded remnant of the central uplift domain, which forms the basis of the crater diameter of 70 km. Prominent, narrow linear anomalies that cross-cut the demagnetised zone with broadly east-west orientations are mafic dykes that post-date the impact structure. Credit: Erickson et al.

The result is intriguing because the Yarrabubba crater was made at a time when rocks on many continents provide evidence of glacial conditions, and oceans were becoming more oxygenated. Thus co-author Nicholas Timms (Curtin University):

“The age of the Yarrabubba impact matches the demise of a series of ancient glaciations. After the impact, glacial deposits are absent in the rock record for 400 million years. This twist of fate suggests that the large meteorite impact may have influenced global climate.

“Numerical modelling further supports the connection between the effects of large impacts into ice and global climate change. Calculations indicated that an impact into an ice-covered continent could have sent half a trillion tons of water vapour – an important greenhouse gas – into the atmosphere. This finding raises the question whether this impact may have tipped the scales enough to end glacial conditions.”

An end to a period of snowball Earth? Perhaps so. Certainly the work is a reminder of how much we have to learn about crater structures on our own planet, and how much we need to acquire precise ages for them. The impact’s effects, assuming a continental ice sheet, would have been powerful. The team’s numerical models of a 70-kilometer impact crater driven into a granitic target with overlying ice sheet (modeled at from 2 to 5 kilometers in thickness) show the almost instantaneous vaporization of huge amounts of ice. From the paper:

The vapourised ice corresponds to between 9 × 1013 and 2 × 1014 kg of water vapour being jetted into the upper atmosphere within moments of the impact… Impact-generated water vapour in the lower atmosphere would have condensed and rapidly precipitated as rain and snow with no significant long-term climate effects, or could have even triggered widespread glacial conditions via cloud albedo effects during interglacial periods. However, ejection of high-altitude water vapour has potential for greenhouse radiative forcing, depending critically on atmospheric residence time. 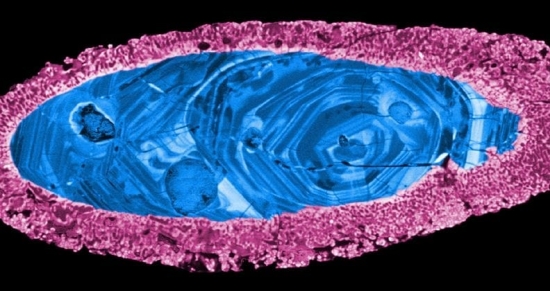 The authors are quick to note how difficult it is to model the impact’s effects due to our uncertainties about the composition of the Earth’s atmosphere in the period in question. But they note that the atmosphere would have contained only a fraction of current levels of oxygen, making it likely that huge amounts of H2O vapor released instantaneously into the atmosphere would have had global ramifications.

While the ‘snowball Earth’ hypothesis dominates coverage of this paper, I think the broader significance is in the nature of ongoing research. We can inspect the impact record on surfaces like the Moon due to the lack of atmospheric erosion, but on Earth we face the latter as well as the obscuring effects of tectonics. Until we have a better record of terrestrial impacts, we won’t understand the links between impacts and changes to global climate. At least we have the notable exception of the Chicxulub crater in the Gulf of Mexico’s Yucatán Peninsula, a feature under intense study.

Going back much farther in time, however, we’re looking at poorly constrained and ambiguous impact evidence, a problem that this paper addresses for a period that was hitherto lacking in impact analysis at this level of detail. More broadly, we’re reminded as well of the shaping effect of bombardment as young terrestrial planets evolve, and should always be mindful of the contingencies forced upon nascent worlds by system debris.

Next post: Looking Back at the Spitzer Space Telescope