Looking Back at the Spitzer Space Telescope

The Spitzer Space Telescope, which is to end its mission on January 30, has a special place in my memory. I was making a trip to the Jet Propulsion Laboratory as part of the research for my Centauri Dreams book when I noticed on a monitor a countdown — still in days — for the launch of Spitzer, then known as the Space Infrared Telescope Facility (SIRTF).

The observatory was launched on the 25th of August, 2003. I remember hot Pasadena weather, a conversation with aerospace legend Adrian Hooke (he was a member of the Kennedy Space Center launch team for Apollo 9, 10, 11 and 12, among much else), a rousing talk with Humphrey “Hoppy” Price about interstellar possibilities. So many good conversations, some serious interviews, and a growing enthusiasm for interstellar flight.

But Spitzer had my attention because it was the next mission, one of the Great Observatory missions which included the Hubble Space Telescope, the Compton Gamma Ray Observatory, the Chandra X-ray Observatory, and Spitzer itself. The infrared observatory lasted longer than anyone expected and continued to function even after exhausting its helium coolant in 2009, at which point the ‘cold mission’ ended, but the ‘warm mission’ would last over a decade.

‘Warm’ and ‘cold’ are obviously relative terms when we talk about objects in space. With a full stock of coolant, the spacecraft could maintain temperatures as low as minus 267 degrees Celsius, so yes, that’s ‘cold.’ But Spitzer functioned a long way from Earth, so that even the ‘warm’ mission could operate at minus 244° C, and that enabled continued observations in two infrared wavelengths. We got more than 16 years of use out of Spitzer, another case among many of a mission’s science team working all the angles to keep their craft alive. 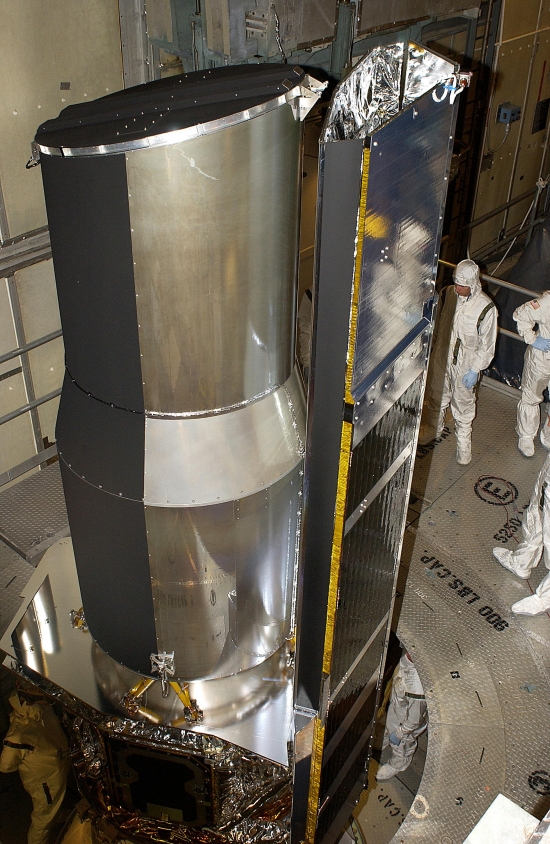 The beauty of working at infrared wavelengths is that you can see things that are too cold to emit much visible light. For our purposes, that includes brown dwarfs and exoplanets, but the observatory has also excelled at studying distant galaxies, including (in conjunction with Hubble observations) the most distant galaxy yet observed, GN-z11, which is seen in the direction of Ursa Major as it was 13.4 billion years in the past. Again of direct relevance to Centauri Dreams readers is Spitzer’s work on interstellar dust, whose chemical composition, studied via spectroscopy, can help us learn more about what goes into planet formation.

This is the instrument that, in 2007, gave us the first identification of molecules in the atmosphere of an exoplanet — two of them, actually. HD 209458b and HD 189733b are ‘hot Jupiters’ and the use of transmission spectroscopy to study their atmospheres points us toward the future prospect of searching for biosignatures on small, rocky planets like Earth. In 2010, Spitzer was part of the discovery of a planet 13,000 light years away, found via gravitational microlensing. Back in 2005, it made direct observations of the ‘hot Jupiters’ HD 209458b and TrES-r1, the first telescope to directly observe light from a planet in another stellar system. 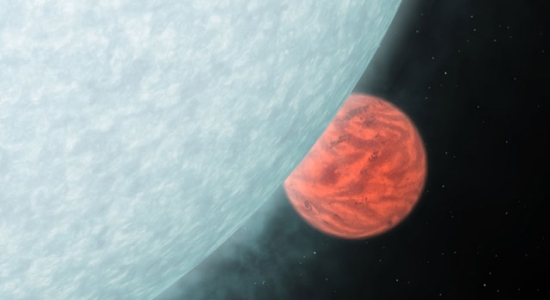 Image: Spitzer was the first telescope to directly observe light from a planet outside our solar system. Prior to that, exoplanets had been observed only indirectly. This accomplishment kicked off a new era in exoplanet science, and marked a major milestone on the journey toward detecting possible signs of life on rocky exoplanets. Two studies released in 2005 reported direct observations of the warm infrared glows from two previously detected “hot Jupiter” planets, designated HD 209458b and TrES-r1. Hot Jupiters are gas giants similar to Jupiter or Saturn, but are positioned extremely close to their parent stars. From their toasty orbits, they soak up ample starlight and shine brightly in infrared wavelengths. Credit: NASA/JPL-Caltech.

I won’t even try to go through all of Spitzer’s accomplishments, but I do need to mention the seven Earth-sized planets around TRAPPIST-1, which Spitzer data, over 500 hours worth, helped scientists identify via transit methods. And I have to include the ‘weather map’ of HD 189733b, a chart of temperature variations over the surface of a gas giant. Sean Carey, manager of the Spitzer Science Center at Caltech, has this to say about the instrument:

“When Spitzer was being designed, scientists had not yet found a single transiting exoplanet, and by the time Spitzer launched, we still knew about only a handful. The fact that Spitzer became such a powerful exoplanet tool, when that wasn’t something the original planners could have possibly prepared for, is really profound. And we generated some results that absolutely knocked our socks off.”

So true! From its Earth-trailing orbit, Spitzer was a long way from our planet’s heat and could offer greater sensitivity than other instruments, especially considering that it could detect some infrared wavelengths that could not be seen through the filter of our atmosphere. What a marvelous run for this observatory, whose decommissioning leads us directly into the launch of the infrared James Webb Space Telescope. We can only hope that the highly complex JWST makes it safely into space and that it lives to see as many mission extensions (5) as the Spitzer Space Telescope. 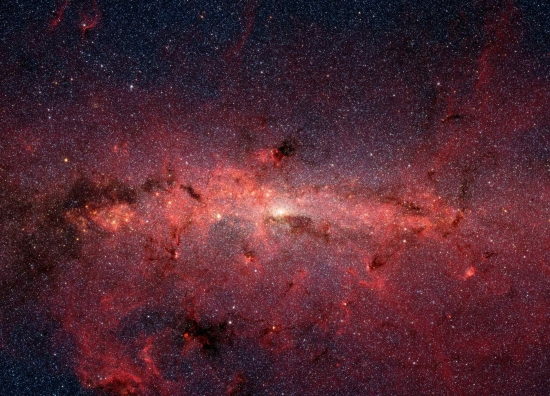 Image: This dazzling infrared image from NASA’s Spitzer Space Telescope shows hundreds of thousands of stars crowded into the swirling core of our spiral Milky Way galaxy. In visible-light pictures, this region cannot be seen at all because dust lying between Earth and the galactic center blocks our view. In this false-color picture, old and cool stars are blue, while dust features lit up by blazing hot, massive stars are shown in a reddish hue. Both bright and dark filamentary clouds can be seen, many of which harbor stellar nurseries. The plane of the Milky Way’s flat disk is apparent as the main, horizontal band of clouds. The brightest white spot in the middle is the very center of the galaxy, which also marks the site of a supermassive black hole. Credit: NASA/JPL-Caltech.

Spitzer was a pathfinder in many areas of astronomical research, but a kind of personal pathfinder for me, as I’ve always associated its observations with my work as a chronicler of this field. An observatory designed to study “the cold, the old and the dusty,” as NASA likes to say, taught us about objects as close as nearby asteroids and as far as the oldest galaxies. The frustrations of human spaceflight in the post-Apollo era have to be balanced against the brilliance of science missions like Spitzer, which have charted a path forward that should one day lead to direct observations of planets where life may even now be flourishing.