The latest operations of the OSIRIS-REx spacecraft at asteroid Bennu remind me how powerful a wave we’ve unleashed in the coupling of robotics and ever more capable spacecraft components. We’re not exactly at the stage of ‘routine’ asteroid missions, but Hayabusa2 and OSIRIS-REx when seen in the context of upcoming missions like NASA’s DART experiment and the European Space Agency’s Hera are part of our renaissance of this class of object, with results beneficial to science but also practically useful in terms of future impact mitigation. More on DART and Hera tomorrow.

Small objects have plenty to say about our future in space, and I haven’t even mentioned Lucy, which will be studying multiple Jupiter trojans, or the Psyche mission targeting what may be the exposed core of a planetary embryo, or for that matter, the remarkably successful Dawn, which unlocked so many mysteries at Vesta and Ceres. It goes without saying that having an operational spacecraft in the Kuiper Belt is likewise a sign that we are getting pretty good at doing robotic exploration even as we continue to wrestle with the human role on the Moon and Mars.

OSIRIS-REx (Origins, Spectral Interpretation, Resource Identification, Security-Regolith Explorer) has now completed a 620 meter flyover of the site called ‘Nightingale’ on its target asteroid as part of the mission’s analysis of the primary sample collection site. To make this happen, the spacecraft left a 1.2 kilometer home orbit and performed an 11-hour transit over the asteroid, accumulating data about the 16-meter wide sample site and returning to safe orbit. 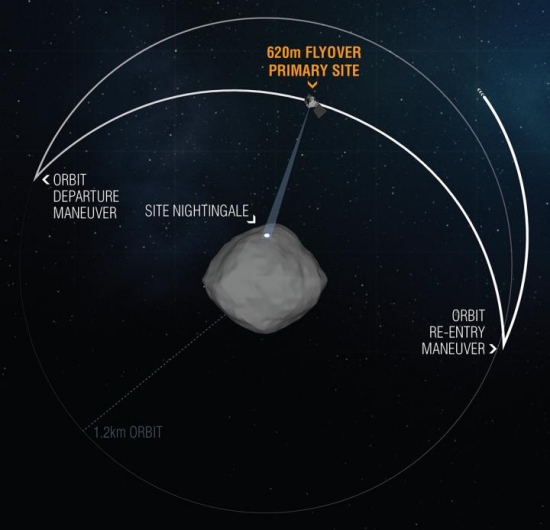 Image: During the OSIRIS-REx Reconnaissance B flyover of primary sample collection site Nightingale, the spacecraft left its safe-home orbit to pass over the sample site at an altitude of 0.4 miles (620 m). The pass, which took 11 hours, gave the spacecraft’s onboard instruments the opportunity to take the closest-ever science observations of the sample site. Credit: NASA/Goddard/University of Arizona.

So there’s a lot happening at Bennu, including an upcoming flyover, scheduled for February 11, of the backup sample site, which has been given the name ‘Osprey.’ Further flybys in March (Nightingale) and May (Osprey) will take OSIRIS-REx even closer to the surface as the spacecraft goes into Reconnaissance C phase, operating at 250 meters. Assuming all goes well, a multi-hour sampling maneuver will begin in August, using the spacecraft’s robotic arm and sampler head to make contact with the asteroid. We will eventually gain between 60 and 2000 grams of surface material, with return to Earth scheduled for September of 2023.