Asteroids are objects of obvious scientific interest, not only for their intrinsic properties but also our need to understand how we can change their motion in space in case one looks like it will come dangerously close to Earth in the future. OSIRIS-REx is extracting all kinds of valuable data from asteroid 101955 Bennu, but we should also keep in mind that Bennu itself is a potentially hazardous object, with a small chance (1-in-2700, according to current estimates) of striking the Earth between 2175 and 2199. Thus the second ‘S’ in OSIRIS, which stands for ‘security’, and is all about measuring the factors that affect the object’s trajectory.

When we get samples from Bennu, we’ll have a better idea about the asteroid’s chemistry and morphology, useful for understanding the early Solar System as well as assessing how hazardous such an object is. But we need to know more, which is where NASA’s Double Asteroid Redirection Test (DART) mission comes in. Here the purpose is planetary defense from the start, for DART will demonstrate how a kinetic impactor can change the motion of an asteroid in space. The target is a binary near-Earth asteroid called (65803) Didymos. 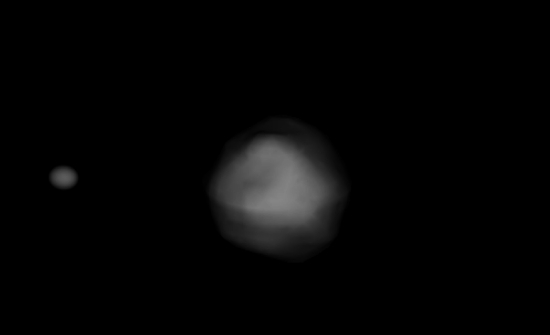 Image: Simulated image of the Didymos system, derived from photometric lightcurve and radar data. The primary body is about 780 meters in diameter and the moonlet is approximately 160 meters in size. They are separated by just over a kilometer. The primary body rotates once every 2.26 hours while the tidally locked moonlet revolves about the primary once every 11.9 hours. Almost one sixth of the known near-Earth asteroid (NEA) population are binary or multiple-body systems. Credit: Naidu et al., AIDA Workshop, 2016.

DART will carry an imaging instrument called DRACO (Didymos Reconnaissance & Asteroid Camera for OpNav), which is based on the now familiar LORRI high-resolution imager that flew on New Horizons, and will use roll-out solar arrays (each 8.6 meters by 2.3 meters) and a NEXT-C ion engine for propulsion. The plan is simplicity itself: DART will crash into the Didymos moonlet at 6.6 kilometers per second, which should change the moonlet’s orbital speed around the main body by a fraction of one percent, and the orbital period by several minutes.

Flying with DART will be LICIA, the Light Italian CubeSat for Imaging of Asteroid, which will observe the impact ejecta in the early phase of crater formation following the impact. The dynamic changes DART’s impact produces will be measured partly by what LICIA learns about the fallback ejecta on both asteroids and the subsequent Hera observations of unweathered fresh material on the two objects. NASA describes LICIA this way:

The LICIA Cube is a 6U CubeSat provided by the Italian Space Agency. It will be carried along with DART to Didymos and released approximately 2 days before the DART impact. LICIA Cube will perform a separation maneuver to follow behind DART and return images of the impact, the ejecta plume, and the resultant crater as it flies by. It will also image the opposite hemisphere from the impact. LICIA Cube is 3-axis stabilized and has a propulsion capability of 56 m/s. The onboard imager has a 7.6 cm aperture, F/5.2 telescope, and an IFOV of 2.9 arcsec/pixel.

Image: Two different views of the DART spacecraft. The DRACO (Didymos Reconnaissance & Asteroid Camera for OpNav) imaging instrument is based on the LORRI high-resolution imager from New Horizons. The left view also shows the Radial Line Slot Array (RLSA) antenna with the ROSAs (Roll-Out Solar Arrays) rolled up. The view on the right shows a clearer view of the NEXT-C ion engine. Credit: NASA.

The European Space Agency’s Hera mission — powered by solar arrays with a hydrazine propulsion system — is to be the follow-up, making a post-impact survey using high-resolution visual, laser and radio science to map what will be the smallest asteroid yet visited by spacecraft. The DART collision is scheduled for 2022, with immediate results probably hidden by an expected dust cloud. Hera will investigate the asteroid impact crater and surrounding surface in 2026, allowing scientists to refine their numerical models of the impact process. All of this works toward building a deflection technique for planetary defense.

Earth-based observations of the Didymos system gathered during its close approach in February-May 2017 were analyzed at a workshop in Prague in 2018, allowing constraints to be placed on the strength of the YORP effect, which results from uneven heating on the surface that can alter the object’s spin state. Further observations will tighten these constraints, making the effects of the DART impact easier to separate from the pre-impact state of the system.

A key Hera role in all this will be to measure Didymos’ mass, which will help scientists calculate the efficiency of the impact momentum transfer once we’ve also measured the change in the small moon’s orbital period. Thus the two missions will result in accurate modeling of the response to the impact as well as the likely internal structure of the asteroid. Hera will be carrying two six-unit cubesats of its own to provide spectral measurements of the surface of both asteroids, with a Cubesat called APEX (Asteroid Prospection Explorer) actually landing on one of them. A second CubeSat (Juventas) will measure the gravitational field and internal structure of the small moon, doing a low-frequency radar survey of the asteroid interior.

The DART launch window opens in late July of 2021, with launch aboard a SpaceX Falcon 9, with intercept of the Didymos moonlet in late September of 2022, when the system is about 11 million kilometers from Earth. Earth-based telescopes and planetary radar will be able to measure the effects of the impact to back up the findings of the spacecraft on the scene. The results should be small but highly useful in giving us data on how impacts affect asteroids of this size, with the added benefit of enhancing international cooperation on a matter of global importance.