Asteroid 162173 Ryugu, recently explored in depth by the Hayabusa2 spacecraft, is a C-type asteroid, rich in carbon. About a kilometer in diameter, it is evidently composed of highly porous material, and seems to have been formed by the agglomeration of fragments from a larger parent body that was broken apart by impacts. We learn this from a new paper in Nature that examines the object’s high porosity and the significantly low mechanical strength of its rock fragments, which affect how it would act if hitting an atmosphere.

Matthias Grott, of the German Aerospace Center (Deutsches Zentrum für Luft- und Raumfahrt; DLR) is the principal investigator for MARA, the DLR-built radiometer that flew on board Hayabusa2 and landed aboard the Mobile Asteroid Surface Scout (MASCOT). Says Grott:

“The published results are a confirmation of the results from the studies by the DLR radiometer MARA… It has now been shown that the rock analysed by MARA is typical for the entire surface of the asteroid. This also confirms that fragments of the common C-type asteroids like Ryugu probably break up easily due to low internal strength when entering Earth’s atmosphere.” 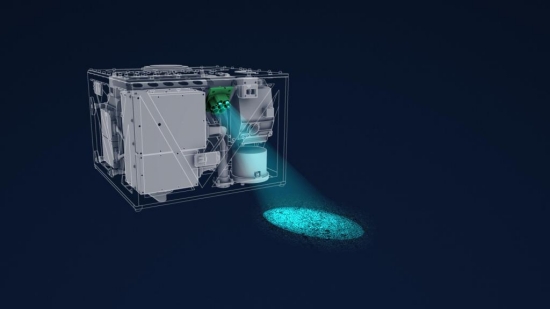 Image: An artist’s conception of the MARA radiometer at work within MASCOT on the surface of Ryugu. Credit: DLR.

Breaking up into fragments upon entering Earth’s atmosphere would help to explain why carbon-rich meteorites are relatively uncommon on Earth, as most would have burned up on the way to the ground. But the new paper goes on to make the case that fragile, porous asteroids like this may link us directly to the evolution of primordial dust into planetary bodies. Hence the importance of missions like Hayabusa2 and OSIRIS-REx, which actually visit and sample the minor objects that would have formed during the earliest era of the Solar System’s development.

The paper in Nature looks at the global properties of Ryugu, an analysis that complements and confirms the findings of the MASCOT lander. The asteroid’s surface temperature has been examined through the Thermal Infrared Imager (TIR) aboard the spacecraft by the team working with first author Tatsuaki Okada of the Japanese space agency JAXA. Measuring in the 8 to 12 micrometer wavelength range during day and night cycles, they find a surface that heats quickly when exposed to sunlight. Grott adds:

“The rapid warming after sunrise, from approximately minus 43 degrees Celsius to plus 27 degrees Celsius suggests that the constituent pieces of the asteroid have both low density and high porosity.” 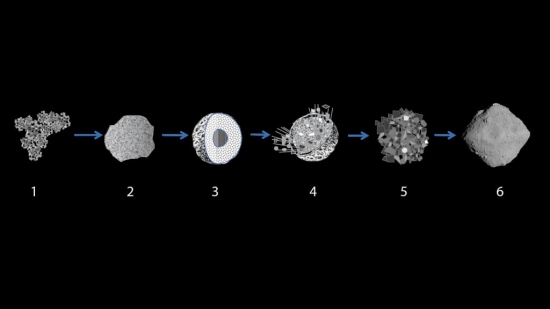 We should be learning a lot more when the surface samples from two landing sites, currently traveling back to Earth with the spacecraft, land in Australia at the end of this year. The paper draws not only on already acquired surface data but high resolution mapping from orbit. The authors argue that C-type asteroids are most likely formed from ‘fluffy dust’ or pebbles in the early Solar System, leading to large asteroids in the main belt with high porosity. Further thoughts re planet formation from the paper:

These C-type asteroids might share their highly porous nature with planetesimals that formed from fluffy dust in the early Solar System and could have strongly affected planetary formation processes such as cratering and collisional fragmentation by attenuating shock propagation . The possibility still cannot be ruled out that Ryugu’s low thermal inertia and low density arise from surface materials different from carbonaceous chondrites, such as the organic- rich material discovered on comet 67P/Churymov-Gerasimenko . This question will, however, be resolved upon sample return.

What the samples will reveal, then, is whether Ryugu is made up of material similar to chondritic meteorites — chondrules are millimeter-sized spheres of rock considered to be building blocks of planet formation — or organic-rich material like that found on comet 67P/ Churyumov-Gerasimenko. We’ll have that answer comparatively soon, but there is something else to look forward to when it comes to probing exotic materials: The sample returns from the OSIRIS-REx mission at asteroid Bennu, expected in 2023, and samples of Phobos and Deimos. The latter should reach us in 2029 as JAXA explores the asteroid-like Martian moons in the ‘Martian Moons eXploration’ (MMX) mission, scheduled for launch in 2024. 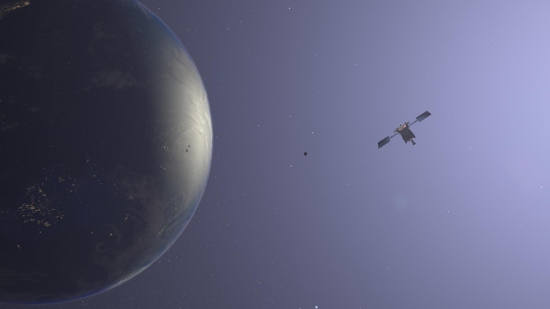