The Closest Black Hole to Earth

Black holes are such exotic objects that they somehow suggest great distance. We’re learning about the black holes at the center of many galaxies even as we’re just beginning to catalog the location of smaller ones elsewhere. But we’re also learning through gravitational wave studies about their interactions and have begun to find black holes closer to home. Thus the just announced discovery of a black hole 1,000 light years from Earth. A long way, to be sure, but the closest ever found to our planet.

Evidence for the object comes from the MPG/ESO 2.2-metre telescope at ESO’s La Silla Observatory in Chile, deduced by a team of astronomers led by Thomas Rivinius from observations of two companion stars. This is, in other words, a triple system, and one that can be seen with the naked eye at that. The system is located in Telescopium, its stars viewable without binoculars or telescope on a clear southern hemisphere night. In fact, here’s where to look. 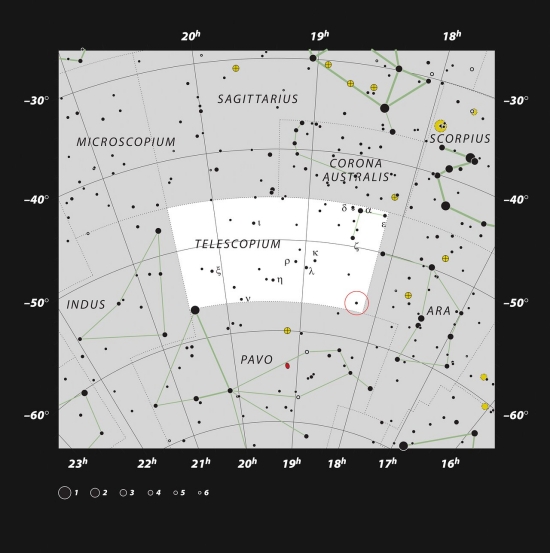 Image: This chart shows the location of the HR 6819 triple system, which includes the closest black hole to Earth, in the constellation of Telescopium. This map shows most of the stars visible to the unaided eye under good conditions and the system itself is marked with a red circle. While the black hole is invisible, the two stars in HR 6819 can be viewed from the southern hemisphere on a dark, clear night without binoculars or a telescope. Credit: ESO, IAU and Sky & Telescope.

The system is HR 6819, which was under study by the Rivinius team as part of an effort targeting double-star systems. It took the FEROS spectrograph on the La Silla instrument to show that one of the two visible stars orbits an unseen object every 40 days. The other star is at a large distance from the inner star/black hole pairing. 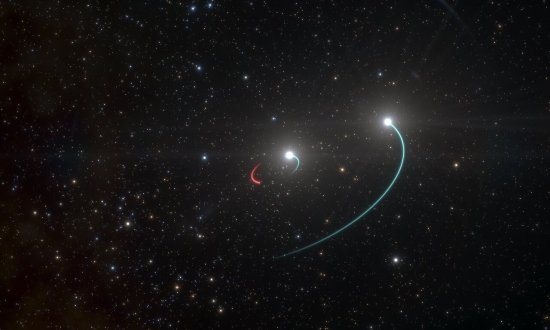 Image: This artist’s impression shows the orbits of the objects in the HR 6819 triple system. This system is made up of an inner binary with one star (orbit in blue) and a newly discovered black hole (orbit in red), as well as a third star in a wider orbit (also in blue). The team originally believed there were only two objects, the two stars, in the system. However, as they analysed their observations, they were stunned when they revealed a third, previously undiscovered body in HR 6819: a black hole, the closest ever found to Earth. The black hole is invisible, but it makes its presence known by its gravitational pull, which forces the luminous inner star into an orbit. The objects in this inner pair have roughly the same mass and circular orbits. The observations, with the FEROS spectrograph on the 2.2-metre telescope at ESO’s La Silla, showed that the inner visible star orbits the black hole every 40 days, while the second star is at a large distance from this inner pair. Credit: ESO/L. Calçada.

We are dealing with a stellar-mass black hole that shows no visible interactions with its environment, and thus had to be deduced from the orbit of the nearby star. As lead author Rivinius notes: “An invisible object with a mass at least 4 times that of the Sun can only be a black hole.” A reasonable conclusion, and a black hole that stands in contrast to the black holes previously discovered in the galaxy, nearly all of which are detectable through strong X-ray emissions as they affect nearby matter.

If we’ve found a black hole this comparatively close to the Solar System, what does this say about their numbers elsewhere? Rivinius speaks in terms of hundreds of millions of black holes, considering how many stars have ended their existence through gravitational collapse into such objects over the lifetime of the galaxy. Marianne Heida (ESO), a co-author of the paper, points to signs of another such system:

“We realised that another system, called LB-1, may also be such a triple, though we’d need more observations to say for sure. LB-1 is a bit further away from Earth but still pretty close in astronomical terms, so that means that probably many more of these systems exist. By finding and studying them we can learn a lot about the formation and evolution of those rare stars that begin their lives with more than about 8 times the mass of the Sun and end them in a supernova explosion that leaves behind a black hole.” 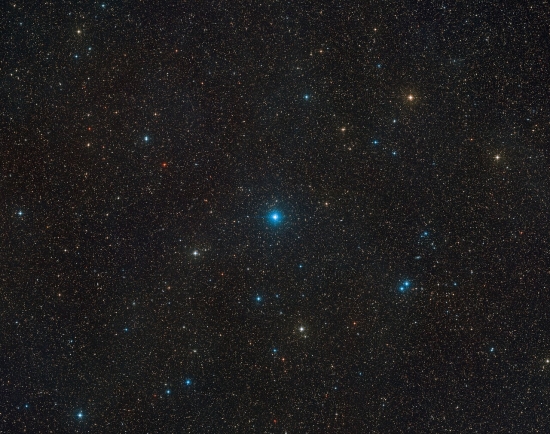 Image: This wide-field view shows the region of the sky, in the constellation of Telescopium, where HR 6819 can be found, a triple system consisting of two stars and the closest black hole to Earth ever found. This view was created from images forming part of the Digitized Sky Survey 2. Credit: ESO/Digitized Sky Survey 2. Acknowledgement: Davide De Martin.

We may also gain insights into the cosmic mergers that gravitational wave astronomy has shown us by studying systems like HR 6819. In such cases, we may be dealing with systems where the inner pairing is made up of two black holes, or a black hole and a neutron star. In that scenario, the outer star in the triple system could interact gravitationally so as to cause a merger that releases gravitational waves. 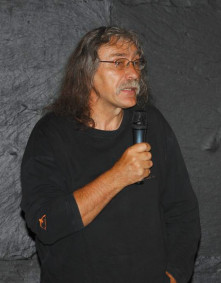 Before ending today’s article, I want to mention that the Rivinius paper is dedicated to the memory of the Czech astronomer Stanislav (Stan) Štefl, who died recently at age 58 in a car accident in Santiago, Chile. A tribute can be found here. Dr. Štefl worked at ESO Headquarters as a research associate and, from 2004 until 2012, was a Very Large Telescope Interferometer (VLTI) support astronomer at Paranal Observatory. For the past year and a half, he had been on assignment to the Atacama Large Millimeter/ submillimeter Array (ALMA), working in Santiago and at Chajnantor.

Although we discuss objects and distances at scales that defy the imagination, our community is a relatively small one. Such losses are wounds for us all.

The paper is Rivinius et al., “A naked-eye triple system with a non-accreting black hole in the inner binary,” Astronomy & Astrophysics Vol. 637, L3 (May, 2020). Abstract.

Next post: Ryugu: An Asteroid’s Interactions with the Sun