On SETI, International Law, and Realpolitik

When Ken Wisian and John Traphagan (University of Texas at Austin) published “The Search for Extraterrestrial Intelligence: A Realpolitik Consideration” (Space Policy, May 2020), they tackled a problem I hadn’t considered. We’ve often discussed Messaging to Extraterrestrial Intelligence (METI) in these pages, pondering the pros and cons of broadcasting to the stars, but does SETI itself pose issues we are not considering? Moreover, could addressing these issues possibly point the way toward international protocols to address METI concerns?

Ken was kind enough to write a post summarizing the paper’s content, which appears below. A Major General in the USAF (now retired), Dr. Wisian is currently Associate Director of the Bureau of Economic Geology, Jackson School of Geosciences at UT. He is also affiliated with the Center for Space Research and the Center for Planetary Systems Habitability at the university. A geophysicist whose main research is in geothermal energy systems, modeling, and instrumentation & data analysis, he is developing a conference on First Contact Protocols to take place at UT-Austin this fall, a follow-on to his recent session at TVIW 2019 in Wichita. 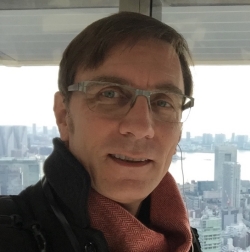 1. It does not alert ETI to our existence and therefore we should not face a threat of invasion or destruction from aliens (if it is even practical to do so over interstellar distances)

2. The minor Earthbound threat from extremists (of various possible persuasions) who might not like the possibility of ETI’s existence conflicting with their “world view” would be no more than an annoyance.

Implicit in the above is the underlying assumption that the only realistic threat that could arise from METI or SETI is that from a hostile ETI. In other words, the threat is external to humanity. What this too simple reasoning overlooks is human history, particularly international affairs, conflicts and war. [1]

SETI as used here is the passive searching for electromagnetic signals from ETI. This is currently primarily considered to be in the form of radio or laser signal, deliberately sent to somewhere. The search for non-signal evidence (e.g. inadvertent laser propulsion leakage, etc) is not considered here, though it could tie in to the discussion in a distant, indirect manner. Note: an ETI artifact (e.g. a spaceship) could have similar import as a SETI detection discussed here.

So what harm could SETI do? Looking at current and historical international affairs, particularly great-power competition, the answer is readily apparent – competition for dominance. In international affairs, nations compete, sometimes violently, for position in the world. This can be for economic or military advantage, more land or control over the seas, or merely survival. Witness the South China Sea today, stealing the secrets to nuclear weapons in the 1940’s and 1950’s, or the Byzantine Empire engaging in industrial espionage to steal the secret to making silk from China.

Now contemplate the potential technology advances that could come with a SETI detection. This could range from downloading the “Encyclopedia Galactica” to establishing two-way dialogue that includes sharing technology. With the potential for revolutionary science and technology leaps, whether directly destructive or not, to say the great & super powers would be “interested” is a monumental understatement.

Now think about the potential advantage (read as domination-enabling) that could accrue to one country if they were the only beneficiaries of said technology advances. “How?” you ask. “Anyone can point a radio telescope to the sky” Not so fast. Unless the signal comes from within our own galactic back yard, most likely within the Solar System, it will take a relatively large, complicated industrial complex (physical plant) with very specialized personnel to run, in order to send and receive interstellar communications. This is the key fact that could lead to SETI/METI being the next “Great Game” [2] of international affairs.

Large, specialized complexes & associated personnel are limited in number and therefore subject to physical control. For the sake of argument, let’s say there are a dozen such facilities in the world. This is far less than the number of critical infrastructure sites the US and coalition forces decided had to be taken out in Iraq in the Gulf Wars in order to reduce their military capability – a very manageable target set size. Now you begin to see the problem; superpowers, seeing a potentially world-dominating advantage in monopolizing the ETI communication channel, might also see as feasible preserving their access to ETI while at the same time denying the same to all other countries.

While “Great Games” like this can sometimes be kept in the purely political realm, that is relatively rare. Competition of this sort often includes violent espionage or proxy wars and occasionally can escalate to direct super-power competition. Thus, an actual SETI detection could lead rapidly to the first true information war – a superpower war (with all the existential risk that carries) fought purely for control of knowledge.

Monopolizing communication with ETI could be the trigger for the ﬁrst information-driven world war.

Realization of the risk that even passive SETI presents should drive further actions:

1. The development of realistic and binding international treaties on the handling of first contact protocols – admittedly a long-shot. The existing post-detection protocol is a very small and completely non-binding first step in this direction.

2. Formation of deliberately international SETI facilities with uninterruptible data sharing to partner countries (and/or the UN). These would also have interleaved internal chains of command from member countries. While this would be somewhat inefficient, the offset to risk is well worth the effort. A phase 2 to this would be a similar arrangement for METI. This would implicitly force the adoption of international standards and provide a process for METI.

3. Further (renewed?) discussion and research into SETI risk. This should bring in many disciplines that are often not involved deeply in the SETI/METI fields, from government policy to history to psychology and many others. In staring so hard at the very obvious risk of METI, we missed the risk from SETI alone. We need to turn around and explore that road before proceeding further down the highway to METI.

[1] What I am getting at here is that unfortunately, this is a stereotypical “ivory tower” point of view, too idealistic and disconnected from messy, illogical human affairs. I say this reluctantly as a “card-carrying” (i.e. Ph.D.) member of the academic world.

[2] I am definitely abusing the term “Great Game” in multiple ways. The term refers to the 19th competition between the British and Russian empires for control of Central and South Asia. It was a deadly serious and deadly game in actuality, but the term captures well the feeling of being in a fierce competition.

PG: Let me insert here this excerpt from the paper highlighting the question of international law and the issues it raises:

The potentially enormous value to nation states of monopolizing communication with ETI, for the purpose of technological dominance in human affairs, is a significant factor in understanding possible scenarios after a confirmed contact event and bears further thinking by scholars and policy specialists. History shows that in circumstances that states perceive as vital they will likely act in their perceived best interest in accordance with principles of realpolitik thinking. In these circumstances, international law is frequently not a strong constraint on the behavior of governments and a protocol developed by scientists on how to handle first contact is unlikely to be of any concern at all. This risk needs to be acknowledged and understood by the larger international community to include scientists active in SETI in addition to political leaders and international relations scholars.

The paper is Wisian and Traphagan, “The Search for Extraterrestrial Intelligence: A Realpolitik Consideration,” Space Policy May, 2000 (abstract).