Our galaxy is 10,000 times more massive than Sagittarius, a dwarf galaxy discovered in the 1990s. But we’re learning that Sagittarius may have had a profound effect on the far larger galaxy it orbits, colliding with it on at least three occasions in the past six billion years. These interactions would have triggered periods of star formation that we can, for the first time, begin to map with data from the Gaia mission, a challenge tackled in a new study in Nature Astronomy.

The work is built around Gaia Data Release 2, examining the photometry and parallax information combined with modeling of observed color-magnitude diagrams to build a star formation history within a bubble around the Sun with a radius of 2 kiloparsecs (about 6500 light years). The star formation ‘enhancements,’ as the paper calls them, are well-defined, though with decreasing strength, with a possible fourth burst spanning the last 70 million years

Ruiz-Lara sees the disruption caused by Sagittarius as substantial, a follow-on to an earlier merger:

“At the beginning you have a galaxy, the Milky Way, which is relatively quiet. After an initial violent epoch of star formation, partly triggered by an earlier merger as we described in a previous study, the Milky Way had reached a balanced state in which stars were forming steadily. Suddenly, you have Sagittarius fall in and disrupt the equilibrium, causing all the previously still gas and dust inside the larger galaxy to slosh around like ripples on the water.” 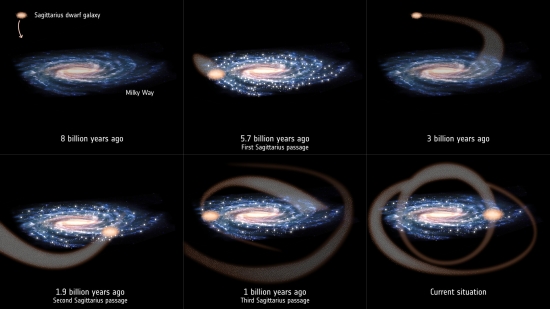 Image: The Sagittarius dwarf galaxy has been orbiting the Milky Way for billions for years. As its orbit around the 10,000 times more massive Milky Way gradually tightened, it started colliding with our galaxy’s disc. The three known collisions between Sagittarius and the Milky Way have, according to a new study, triggered major star formation episodes, one of which may have given rise to the Solar System. Credit: ESA.

The idea is that higher concentrations of gas and dust are produced in some areas as others empty, the newly dense material triggering star formation. According to the paper, the 2 kiloparsec local volume is:

…characterized by an episodic SFH [star formation history], with clear enhancements of star formation ~ 5.7, 1.9 and 1.0 Gyr ago. All evidence seems to suggest that recurrent interactions between the Milky Way and Sgr dwarf galaxy are behind such enhancements. These findings imply that low mass satellites not only affect the Milky Way disk dynamics, but also are able to trigger notable events of star formation throughout its disk. The precise dating of such star forming episodes provided in this work sets useful boundary conditions to properly model the orbit of Sgr and its interaction with the Milky Way. In addition, this work provides important constraints on the modelling of the interstellar medium and star formation within hydrodynamical simulations, manifesting the need of understanding physical processes at subresolution scales and of further analysis to unveil the physical mechanisms behind global and repeated star formation events induced by satellite interaction.

“The Sun formed at the time when stars were forming in the Milky Way because of the first passage of Sagittarius. We don’t know if the particular cloud of gas and dust that turned into the Sun collapsed because of the effects of Sagittarius or not. But it is a possible scenario because the age of the Sun is consistent with a star formed as a result of the Sagittarius effect.”

What I learned here is that understanding the physical processes behind star formation and incorporating that understanding into workable models is a problematic issue for astronomers today, because ongoing work is challenging earlier views of what happens when galaxies merge. The paper points out that while we have a number of colliding galaxies to examine, there is little theoretical work on the impact of a single satellite galaxy on a spiral galaxy.

And a key point: “…although we can easily link the reported enhancements with possible perientric passages of Sgr, we cannot pinpoint what exact physical mechanisms are triggering such events.” Plenty of opportunity ahead for researchers looking into the Milky Way’s history.

The paper is Ruiz-Lara et al., “The recurrent impact of the Sagittarius dwarf on the star formation history of the Milky Way,” published in Nature Astronomy 25 May 2020 (abstract).