A New Class of Astronomical Transients

Some of the fastest outflows in nature are beginning to turn up in the phenomena known as Fast Blue Optical Transients (FBOTs). These are observed as bursts that quickly fade but leave quite an impression with their spectacular outpouring of energy. The transient AT2018cow was found in 2018, for example, in data from the ATLAS-HKO telescope in Hawaii, an explosion 10 to 100 times as bright as a typical supernova that appeared in the constellation Hercules. It was thought to be produced by the collapse of a star into a neutron star or black hole.

Now we have a new FBOT that is brighter at radio wavelengths than AT2018cow, the third of these events to be studied at radio wavelengths. The burst occurred in a small galaxy about 500 million light years from Earth and was first detected in 2016. Let’s call it CSS161010 (short for CRTS-CSS161010 J045834-081803), and note that it completely upstages its predecessors in terms of the speed of its outflow. The event launched gas and particles at more than 55 percent of the speed of light. Such FBOTs, astronomers believe, begin with the explosion of a massive star, with differences from supernovae and GRBs only showing up in the aftermath. 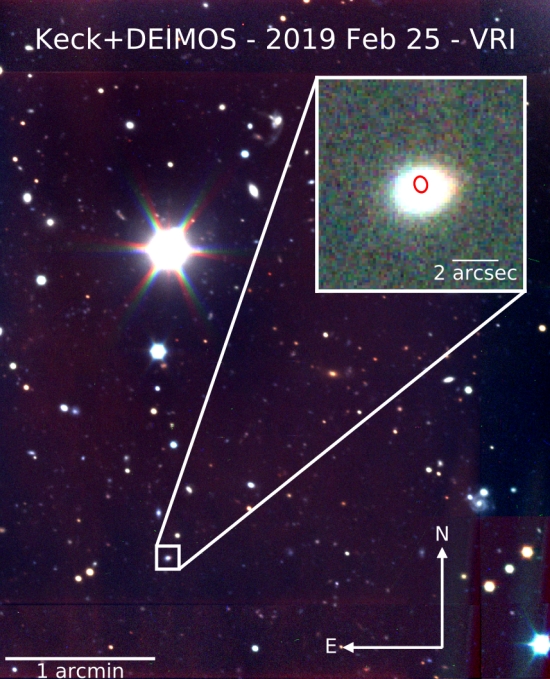 Meanwhile, a second explosion, called ZTF18abvkwla (“The Koala”), has turned up in a galaxy considerably further out at 3.4 billion light years. Caltech’s Anna Ho led the study of this one, with both teams gathering data from the Very Large Array, the Giant Metrewave Radio Telescope in India and the Chandra X-ray Observatory. In both cases, it was clear that the type of explosion, bright at radio wavelengths, differed from both supernovae explosions and gamma-ray bursts. “When I reduced the data,” said Ho, “I thought I had made a mistake.”

FBOTs became recognized as a specific class of object in 2014, but the assumption is that our archives contain other examples of what Coppejans’ co-author Raffaella Margutti calls ‘weird supernovae,’ a concession to the fact that it is hard to gather information on these objects solely in the optical. The location of the CSS161010 explosion is a dwarf galaxy containing roughly 10 million stars in the southern constellation Eridanus.

Bright FBOTs like CSS161010 and AT2018cow have thus far turned up only in dwarf galaxies, which the authors note is reminiscent of some types of supernovae as well as gamma-ray bursts (GRBs). A transient like this flares up so quickly that it may prove impossible to pin down its origin,, but black holes and neutron stars are prominent in the astronomers’ thinking:

“The Cow and CSS161010 were very different in how fast they were able to speed up these outflows,” Margutti said. “But they do share one thing — this presence of a black hole or neutron star inside. That’s the key ingredient.”

Even so, the differences between the three FBOTs thus far studied at multiple wavelengths is notable. In the excerpt below, the authors of the Coppejans paper use the term ‘engine-driven’ to refer to the rotating accretion disk that produces jets in a neutron star or black hole produced by a supernova core-collapse, which can propel narrow jets of material outward in opposite directions. The authors believe that FBOTs produce this kind of engine, but in this case one surrounded by material shed by the star before it exploded. The surrounding shell as it is struck by the blast wave would be the source of the FBOT’s visible light burst and radio emission.

The three known FBOTs that are detected at radio wavelengths are among the most luminous and fastest-rising among FBOTs in the optical regime… Intriguingly, all the multi-wavelength FBOTs also have evidence for a compact object powering their emission… We consequently conclude… that at least some luminous FBOTs must be engine-driven and cannot be accounted for by existing FBOT models that do not invoke compact objects to power their emission across the electromagnetic spectrum. Furthermore, even within this sample of three luminous FBOTs with multiwavelength observations, we see a wide diversity of properties of their fastest ejecta. While CSS161010 and ZTF18abvkwla harbored mildly relativistic outflows, AT 2018cow is instead non-relativistic.

Which is another way of saying that we have a long way to go to understand FBOTs. We see characteristics of supernovae as well as GRBs but distinctive differences. Further observations in radio and X-ray wavelengths are critical for learning more about their physics. 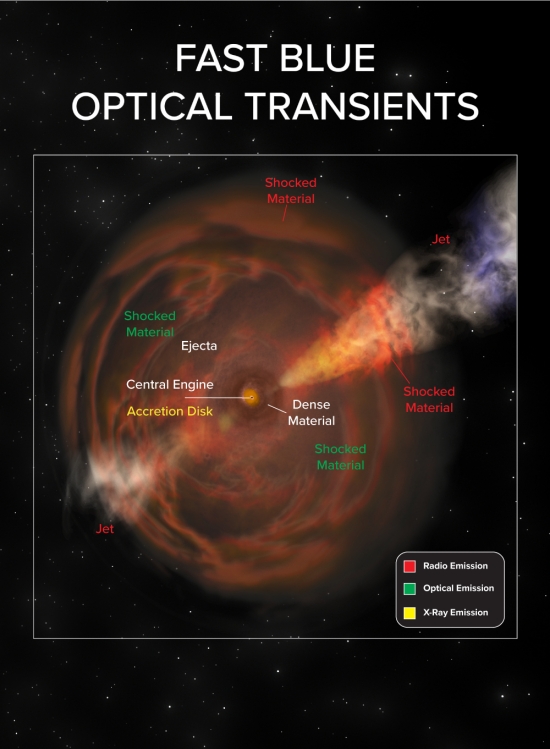