Planetary Days as a SETI Factor

Yesterday we looked at a new paper from Robert Gray on the possibility — even likelihood — that the kind of signal SETI is looking for would be intermittent in nature rather than continuous. The numbers tell the story: In Gray’s calculations, an isotropic transmission with a range of 1,000 light years — i.e., a continuous beacon broadcasting in all directions — requires on the order of 1015 W to produce the kind of signal-to-noise ratio that would allow us to pick it up with facilities like those used in current SETI searches.

1015 is a big number, going beyond the current terrestrial power consumption of 1013 W by orders of magnitude and reaching 1 percent of the total power received by Earth from the Sun. Reduce the desired range of the signal to 100 light years and the requirement for isotropic broadcasts is still daunting, demanding something like 1013 W, or 10,000 1,000 MW power plants. As Gray puts it:

Indeed. Hence the need to ponder alternatives. Consider the savings gained, for example, in using high-gain antenna systems to target single stars. Gray describes an Arecibo-class transmitting antenna following this strategy. Now the power requirement begins to fall to recognizable levels. An Arecibo-like transmitting antenna punching out a signal to a star 1,000 light years away needs 108 W, dropping to 106 W for a range of 100 light years. In other words, this we can do today with the actual Arecibo planetary radar.

Transmitting is one thing, reception quite another. If we think in terms of sending a signal to more than one target star, broadcasting to each in succession in a repetitive pattern, we are sending a signal that would obviously appear intermittent to any receiving station, and factors that are entirely unknown to us come into play. How often would such signals repeat? We would need to know the number of targets the transmitting civilization had chosen and the dwell time devoted to each. Any calculations we run fall victim to the depth of the imponderables here. 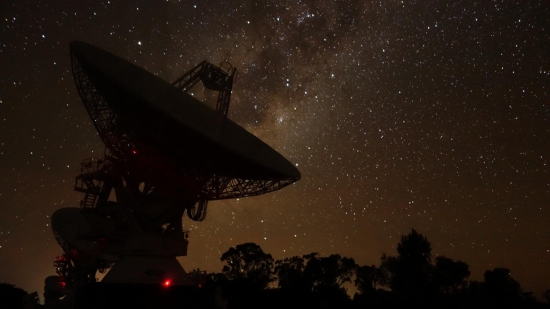 But there are a few numbers we might plug in to give us a sense of the possibilities. Gray’s paper looks at planetary rotation periods as an indicator. The thinking is that transmission from the surface of planets could make rotation a factor, rendering some signals periodic. In our own Solar System, we find a median day of 23.9 hours (dropping to 21.1 hours if we leave Pluto out). Three quarters of the eight planets have days in the range of 10-25 hours. Our knowledge of exoplanet days will grow with time, allowing us to get a sense of day length for the planets we are most interested in: Rocky planets in or near the habitable zone of stars other than our own.

Thus the ‘interstellar lighthouse,’ a directional transmission from a fixed antenna on a rotating planet producing an intermittent signal with the period of the planet’s sidereal day:

In the case of a source planet with the median day in our planetary system and a rotating 1° lune, distant observers would be illuminated for 23.9/360 = 0.0664 hours or 3.9 minutes every 23.9 hours. Such a signaling strategy would have the isotropic broadcasting advantage of illuminating the entire sky although not constantly, and the directional transmission advantage of much lower power requirements than isotropic, and with no need for tracking. A transmission from a rotating antenna system might display a signature Gaussian rise and fall as it swept across a detector, and that might suggest re-observation efforts scaled to a planetary day.

A daily cadence for both radio and optical SETI is thus a possibility, and as Gray notes, most of our searches (and transmissions) have been conducted from single sites on the surface. Planetary days would be a known factor in specifically targeted transmissions. Obviously, there are other options here, including using multiple scattered sites like the Deep Space Network on Earth, or operating a transmitter from space, so this is only one factor to consider.

A distant civilization detecting our transmissions would note the periodicity of the signal based on the terrestrial sidereal day, and conceivably might use the same timing to return a signal to us. Other time intervals studied in this paper include pulse periodicities — are there, in other words, preferred periodicities in signaling just as there may be preferred frequencies? 21 possible time intervals, some defined by pulsar periods, have been suggested in the literature. Orbital periods are an obvious interval for targeted signaling, while some recent papers have suggested synchronization between astronomical events like the conjunction of two exoplanets along the line of sight from Earth or the opposition of planets in other planetary systems.

Thus the assumption of continuous signals and very brief observation times becomes problematic if the signals we are looking for are intermittent. Historically, the longest observation of a single field is 100 hours in work at the Allen Telescope Array, although Gray also notes Frank Drake’s work at Project Ozma, which studied Tau Ceti and Epsilon Eridani for approximately 100 hours each. Intermittent signals would demand long dwell times, but a consideration of a planetary day time scale might prove a useful guide to operations.

A planetary day time scale might be useful in searching for interstellar signals, because planetary rotation would have physical effects on both transmissions and searches operating on the surface of planets. Observations over a planetary day would off course cover many possible shorter repetition rates; observations extending over approximately 25 hours would include signal repetition rates up to the 66th percentile of days in our solar system. That is a much longer observing time than is typical in SETI, but techniques such as radio imaging can be used to observe many stars in a wide field simultaneously. Observations over less than 10 hours would not cover even the shortest planetary days in our solar system.

Writing about interesting papers is frustrating when I come up against time limitations as severe as those I’m under today. I haven’t had time, for example, to discuss the other ways in which signals might be intermittent, but Gray discusses variations in power at the source, propagation effects, variable power cost/availability, interstellar scintillation, variable frequency effects and more (including, and this interested me, variable polarization). Obviously, if these things intrigue you, track down the paper for the full treatment.