I track brown dwarfs closely because they have so much to teach us about the boundary between planet and star. I’m also intrigued by what might be found on a planet orbiting one of these objects, though life seems unlikely. Brown dwarfs begin losing their thermal energy after formation and continue cooling the rest of their lives, a period I’ve seen estimated at only about 10 million years. We know nothing about how long abiogenesis takes — not to mention how common it is — but the outlook for brown dwarf planets and astrobiology seems bleak.

It’s intriguing, though, that we’ve identified a number of brown dwarfs with planetary systems, including 2M1207b, MOA-2007-BLG-192Lb, and 2MASS J044144b, and in the latest news from the NEOWISE mission, we have two brown dwarfs that stand out for other reasons. What used to be the Wide-Field Infrared Survey Explorer would become a tool for the detection of near-Earth objects, but data from the earlier WISE incarnation is still turning up red and brown dwarfs. Along the way, the Backyard Worlds: Planet 9 project, armed with the talents of 150,000 citizen scientists, has more than proven its worth, but more on that in a moment. 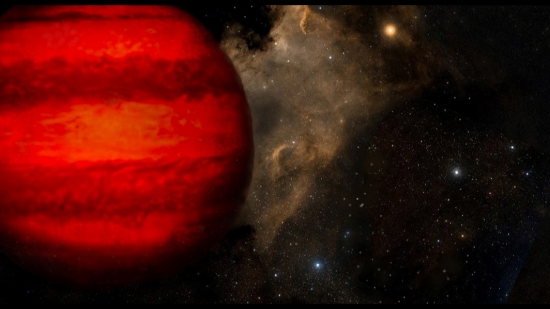 Image: This artist’s concept shows a brown dwarf, a ball of gas not massive enough to power itself the way stars do. Despite their name, brown dwarfs would appear magenta or orange-red to the human eye if seen close up. Credit: William Pendrill (CC BY).

The brown dwarfs in question are notable because of their extreme lack of iron. In fact, a typical brown dwarf would have up to 30 times more iron and other metals than we find in either. Low levels of metallicity are something we would expect in ancient exoplanet systems, where supernovae spewing metals were scarce in nearby space, but the mechanisms involved remain problematic. Marc Kuchner is principal innvstigator for Backyard Worlds: Planet 9:

“A central question in the study of brown dwarfs and exoplanets is how much does planet formation depend on the presence of metals like iron and other elements formed by multiple earlier generations of stars. The fact that these brown dwarfs seem to have formed with such low metal abundances suggests that maybe we should be searching harder for ancient, metal-poor exoplanets, or exoplanets orbiting ancient, metal-poor stars.”

Adam Schneider (Arizona State) found one of the brown dwarfs, WISE 1810, back in 2016. Enter Backyard Worlds: Planet 9, which counts among its discoveries more than 1,600 brown dwarfs as well as the oldest known white dwarf, surrounded by a debris disk. Schneider was able to use WiseView, a tool created by Backyard Worlds citizen scientist Dan Caselden, to track the object’s motion, an indication of its relative proximity. The second brown dwarf is WISE 0414, this one discovered by a group of citizen scientists whose names deserve recognition: Paul Beaulieu, Sam Goodman, William Pendrill, Austin Rothermich, and Arttu Sainio. 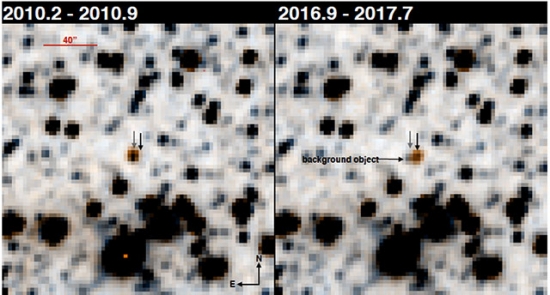 Image: These images show the newly discovered brown dwarf WISE 1810 as seen with the WiseView tool. The object has an orange hue in these false-color images. In both images, a gray arrow on the left indicates the object’s position in 2010; the black arrow on the right indicates its position in 2016. Credit: Schneider et al. 2020.

The needed follow-up by astronomers using near-infrared spectroscopy confirmed that what the citizen scientists had found by working through hundreds of WISE images were indeed brown dwarfs. At the Jet Propulsion Laboratory, Federico Marocco and Eric Mamajek confirmed WISE 0414 using the Hale Telescope at Palomar Observatory in California. The unusual composition of both objects was apparent, as noted in the paper:

We find that the high proper motion objects WISEA 0414−5854 and WISEA 1810−1010 have exceptionally unusual spectroscopic and photometric properties that likely reflect significantly subsolar metallicities. The best-fitting models for these objects suggest very low metallicities ([Fe/H] ≤ −1), though no single model provides a satisfactory fit across all wavelengths. Further astrometric and spectroscopic observations are warranted to better characterize these enigmatic systems.

What caught my eye in this paper is its discussion of what the authors call a “stellar-substellar transition phase.” Metal-poor brown dwarfs — and these are extreme examples — show higher rates of cooling than other dwarfs. Moreover, hydrogen fusion does not stop abruptly as we scale down from star to brown dwarf, but rather, can continue in an interesting way:

…covering a narrow range of masses and large range of effective temperatures over which “unstable fusion” can occur. The masses encompassed by this transition, and the range of temperatures it spans depend on the metallicity and age of the population, with a more pronounced spread expected for metal-poor halo subdwarfs.

Some seven objects meeting this description have previously been found. WISE 1810 and 0414 have the lowest masses and effective temperatures yet discovered in this grouping. The authors point out as well that using proper motion instead of colors to identify cold, low luminosity objects has its advantages, including detecting dwarfs with spectra as unusual as these.

Next post: SPOCK: Modeling Orbital Scenarios around Other Stars

Previous post: What Can SETI Scholars Learn from the Covid-19 Pandemic?