Studies of interstellar interloper ‘Oumuamua move at lightning pace, to judge from a recent exchange on hydrogen ice. A study by Greg Laughlin and Darryl Seligman (both at Yale) just published in June, has now met a response from Thiem Hoang (Korea University of Science and Technology, Daejeon) and Harvard’s Avi Loeb. The issue is significant because if, as Laughlin and Seligman argued, ‘Oumuamua were made of hydrogen ice, then the outgassing that drove its slight acceleration would not have been detectable. At least one mystery solved.

Or was it? One reason the 0.2km radius object didn’t fit the description of a comet was that there was no explanation for its tiny change in velocity. Hoang and Loeb have examined the hydrogen ice concept and found it wanting. Says Hoang:

“The proposal by Seligman and Laughlin appeared promising because it might explain the extreme elongated shape of ‘Oumuamua as well as the non-gravitational acceleration. However, their theory is based on an assumption that H2 ice could form in dense molecular clouds. If this is true, H2 ice objects could be abundant in the universe, and thus would have far-reaching implications. H2 ice was also proposed to explain dark matter, a mystery of modern astrophysics.”

Which sounds interesting in itself because anything bearing on dark matter is worth a look, given our frustration at understanding the matter behind the hypothesis. Laughlin and Seligman had suggested a giant molecular cloud [GMC] as the origin for ‘Oumuamua, but Hoang and Loeb argue that the earlier paper, while considering the destruction of H2 ice in the interstellar medium through evaporation, did not take into account the improbability of such ices forming within a GMC, or the effects of that environment upon their later growth. From the paper:

Assuming that H2 objects could be formed in GMCs by some mechanisms (Füglistaler & Pfenniger 2016; Füglistaler & Pfenniger 2018; Seligman & Laughlin 2020), we quantify their destruction and determine the minimum size of an H2 object that can reach the solar system. We assume that the H2 objects are ejected from GMCs into the ISM by some dynamical mechanism such as tidal disruption of bigger objects or collisions (see Raymond et al. 2018; Rice & Laughlin 2019). 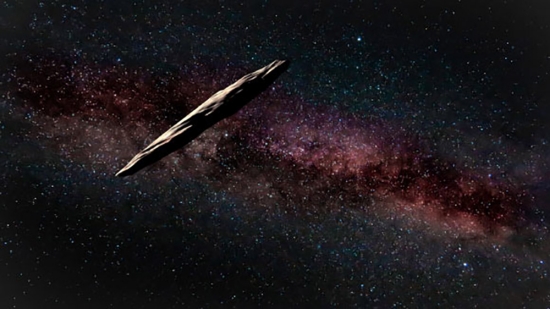 Image: An artist’s rendering of ‘Oumuamua, a visitor from outside the Solar System. Credit: The international Gemini Observatory/NOIRLab/NSF/AURA artwork by J. Pollard.

Hoang and Loeb’s calculations show that H2 icebergs are unlikely to grow to large size because of collisional heating not just from dust but from gas within the birth cloud, meaning that ‘Oumuamua likely wasn’t a hydrogen iceberg (and, along the way, taking out the ancillary proposition that dark matter may be accounted for by H2 snowballs). Micron sized grains in regions where the density of gas is high will cause the hydrogen on the grains to sublimate.

Assuming that H2 objects could somehow form in the densest regions of GMCs, we found that sublimation by collisional heating inside the GMC would destroy the objects before their escape into the ISM [interstellar medium]. We also studied various destruction mechanisms of H2 ice in the ISM. In particular, we found that H2 objects are heated by the average interstellar radiation, so that they cannot survive beyond a sublimation time of tsub ~ 10 Myr for R = 300 m (see Figure 1). Only H2 objects larger than 5 km could survive.

While giant molecular clouds like (GMC) W51, one of the closest to Earth at roughly 17,000 light years, could be a point of origin for the object, the authors argue that even this close GMC is simply too far away. Moreover, it might be hard for a hydrogen iceberg even to exit the giant molecular cloud in the first place. Collisional heating within a GMC would destroy objects like this through thermal sublimation long before they reached a distant stellar system. The paper finds that objects below 200 meters in radius would be destroyed within the parent GMC.

We also have to find a way to get ‘Oumuamua all the way from its birthplace to our Solar System. What Hoang and Loeb point out is that an iceberg made of hydrogen would be unlikely to survive an interstellar journey that would probably take hundreds of millions of years. An object like this is going to begin to evaporate. Their paper goes to work out the survivability of H2 ice from interstellar radiation given thermal sublimation and photodesorption along the way.

Many other factors come into play that cause problems for a hydrogen iceberg. It has to stand up to cosmic rays as well as impacts with matter in the interstellar medium. And we have to throw in what can happen when an object like ‘Oumuamua enters the Solar System, where solar radiation becomes an issue. The calculations presented here show the significance of thermal sublimation due to starlight, while going beyond this to reveal the effects of cosmic rays and impacts with interstellar matter, which turn out to be less significant. 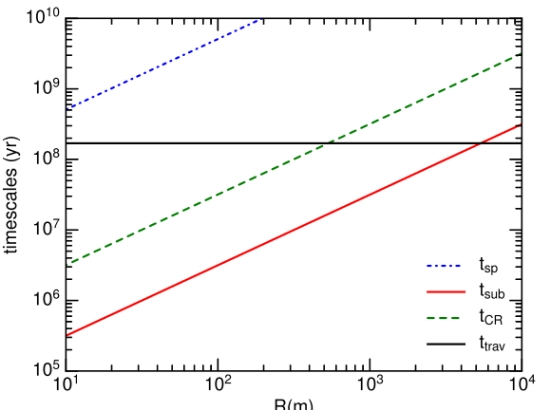 Image: This is Figure 1 from the paper. Caption: Comparison of various destruction timescales (slanted colored lines) as a function of the object radius (in meters) to the travel time from a GMC at a distance of 5.2 kpc, assuming a characteristic speed of 30 km s−1 (horizontal black line). Credit: Hoang & Loeb.

The authors calculate a minimum radius of H2 objects in the range of 5 kilometers for survival in a journey that would have to take in formation in giant molecular clouds and movement through the interstellar medium. 10 million years would wreak havoc on an object the size of ‘Oumuamua.

We’re in a period of energetic debate, a time when the unresolved questions about ‘Oumuamua remain in play. It seems clear that we need a larger population of interstellar objects to place the current work in context, and Loeb has pointed out that we won’t have long to wait:

“If ‘Oumuamua is a member of a population of similar objects on random trajectories, then the Vera C. Rubin Observatory (VRO), which is scheduled to have its first light next year, should detect roughly one ‘Oumuamua-like object per month. We will all wait with anticipation to see what it will find.”