Wait long enough — something like 4.5 billion years — and we’ll have a huge elliptical galaxy resulting from the merger of our own Milky Way with Andromeda (M31). I’ve always been fascinated with Andromeda because being the nearest large galaxy, and a fine spiral at that, it gives us a look at how our own galaxy must appear from the outside. Its faintness to the naked eye belies its size, an object considerably larger than the Moon from our perspective, though best seen, of course, on a Moonless night. And now we learn it is even bigger than we thought.

The Absorption Map of Ionized Gas in Andromeda (Project AMIGA) is the source for this information. A new study coming out of this program uses Hubble data to map the vast gas envelope surrounding Andromeda, a diffuse halo of plasma extending 1.3 million light years from the galaxy and in some directions, as far as 2 million light years. To put this into perspective, Andromeda itself is 2.5 million light years away, meaning that our two galaxies may already be encountering each other as their two haloes nudge up against each other.

Now the reference to the Moon gives way to an even larger one. If we could see Andromeda along with its halo, we’d be dealing with an object the width of three Big Dippers. If the entire structure were visible, no other feature of the nighttime sky would be as large. The AMIGA study, led by Nicolas Lehner (University of Notre Dame) reveals the layered nature of this plasma halo, one that contains two nested and distinct shells of gas. Says Lehner:

“We find the inner shell that extends to about a half million light-years is far more complex and dynamic. The outer shell is smoother and hotter. This difference is a likely result from the impact of supernova activity in the galaxy’s disk more directly affecting the inner halo.” 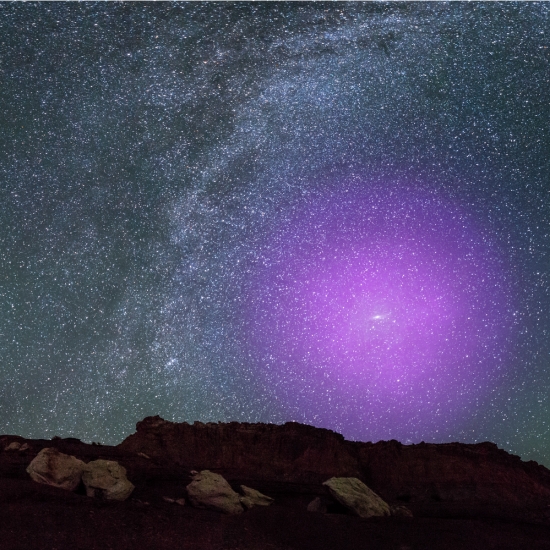 Image: At a distance of 2.5 million light-years, the majestic spiral Andromeda galaxy is so close to us that it appears as a cigar-shaped smudge of light high in the autumn sky. If its gaseous halo could be seen with the naked eye, it would be about three times the width of the Big Dipper—easily the biggest feature on the nighttime sky. Credit: NASA, ESA, J. DePasquale and E. Wheatley (STScI) and Z. Levay.

Sometimes it’s necessary to step back from the minutiae of nearby exoplanet research to see the broader perspective afforded by these cities of stars. Lehner’s co-researcher Samantha Berek (Yale University) calls haloes like these “reservoir[s] of gas” that contain the stuff of future star formation, including the outflows from supernovae. That makes a galactic halo a laboratory for its future evolution, and given its size in our sky, there is no better place to study the phenomenon than Andromeda. Indeed, the team has already found the telltale signs of heavy elements in the halo here, the result of stellar explosions that will seed new worlds.

But despite its relative proximity, how do we go about studying something as diffuse as a galactic halo? AMIGA looks at the light of 43 quasars, those brilliant cores of active galaxies that can be seen in objects much further away than M31. The method: Work with background quasar light as filtered through the Andromeda halo and examine the patterns of absorption in different regions. The data come from Hubble’s Cosmic Origins Spectrograph (COS), working on quasar light in the ultraviolet, a wavelength absorbed by Earth’s atmosphere. 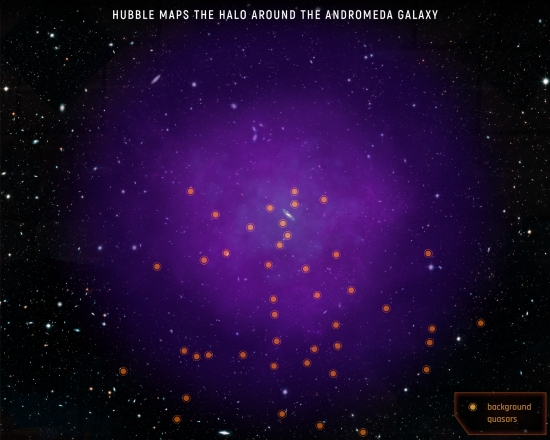 Image: This illustration shows the location of the 43 quasars scientists used to probe Andromeda’s gaseous halo. These quasars—the very distant, brilliant cores of active galaxies powered by black holes—are scattered far behind the halo, allowing scientists to probe multiple regions. Looking through the immense halo at the quasars’ light, the team observed how this light is absorbed by the halo and how that absorption changes in different regions. By tracing the absorption of light coming from the background quasars, scientists are able to probe the halo’s material. Credit: NASA, ESA, and E. Wheatley (STScI).

Ionized gas from carbon, silicon and oxygen turn up in these data, the signature of radiation stripping electrons from atoms. The new maps tune up work Lehner and colleagues performed in 2015, when the Andromeda halo’s complexity was still unknown. Fellow Notre Dame scientist Christopher Howk comments on the scope of the new study:

“Previously, there was very little information—only six quasars—within 1 million light-years of the galaxy. This new program provides much more information on this inner region of Andromeda’s halo. Probing gas within this radius is important, as it represents something of a gravitational sphere of influence for Andromeda.” 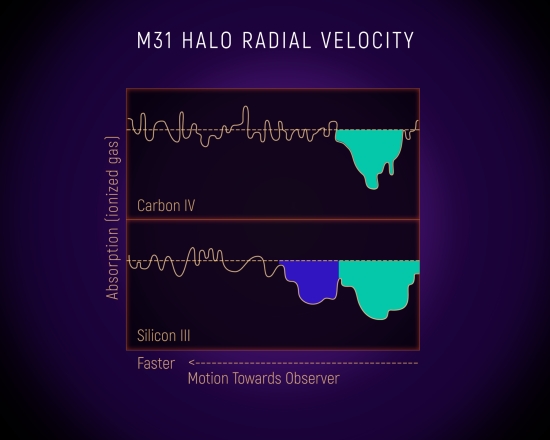 Image: This diagram shows the light from a background quasar passing through the vast, gaseous halo around the neighboring Andromeda galaxy (M31), as spectroscopically measured by the Hubble Space Telescope. The colored regions show absorption from two components that make up the halo. For ionized silicon, a significant absorption is shown in both plots. The more highly ionized carbon is absorbed by only one component. Astronomers can tell the two components apart because their line-of-sight motions, known as radial velocity, cause a Doppler shift that changes the wavelength of light being absorbed. Credit: NASA, ESA, and E. Wheatley (STScI).

The size and nearness of Andromeda thus pay off for the study of galactic haloes. Astronomers have examined them in more distant galaxies, but their distance means that there are far fewer background quasars that line up to allow analysis of the haloes. Here we have the kind of extensive sampling from which we can draw meaningful conclusions, using not just one or perhaps two sightlines but over 40, according to Lehner. Future space telescopes working in the ultraviolet will begin to extend such studies beyond the 30 galaxies of the Local Group.

Next post: SETI: Going Deep with the Data Search

Previous post: What If SETI Finds Something, Then What?