What Breakthrough Listen is calling the most comprehensive SETI search to date is now in the books, or at least, the journals, with results accepted and in process at Monthly Notices of the Royal Astronomical Society. Here we are in the realm of data reanalysis, using previously acquired results to serve as a matrix for re-calculation, with the catalog produced by the European Space Agency’s Gaia spacecraft as the key that turns the lock.

No signatures of extraterrestrial technology were detected in the two analyses produced by Breakthrough Listen in 2017 and 2020. The data for these efforts come largely from the Green Bank Telescope (GBT) in West Virginia and the CSIRO Parkes Radio Telescope in Australia, with a focus on 1327 individual stars. Results were published by the Breakthrough Listen science team at UC-Berkeley, and the choice of targets was telling. The search homed in on relatively nearby stars within about 160 light years of the Sun, under the assumption that less powerful transmitters would be detectable the closer they are to the Earth.

The new analysis of these results has been produced by Bart Wlodarczyk-Sroka, a masters student at the University of Manchester (UK) and his advisor Michael Garrett, working with Berkeley SETI director Andrew Siemion. The Manchester duo realized that when one of the large telescopes was pointed at an individual target, the observation also took in a wide range of background stars. This fact meant that stars much further away could be considered if we could make a determination about their distance.

The Gaia catalog measures the distances to over a billion stars. Wlodarczyk-Sroka and Garrett realized that Gaia now gave them measured parallaxes and inferred distances to stars that were found in the full width half-maximum (FWHM) of the main beam of the telescopes used for the Breakthrough Listen observations. FWHM specifies the angular width of the main beam — think of it as the width of the frequency range where less than half the signal’s power is attenuated. Although not targets of the earlier campaign, these numerous stars were available in the data, previously ignored because their distances from Earth were at the time unknown. 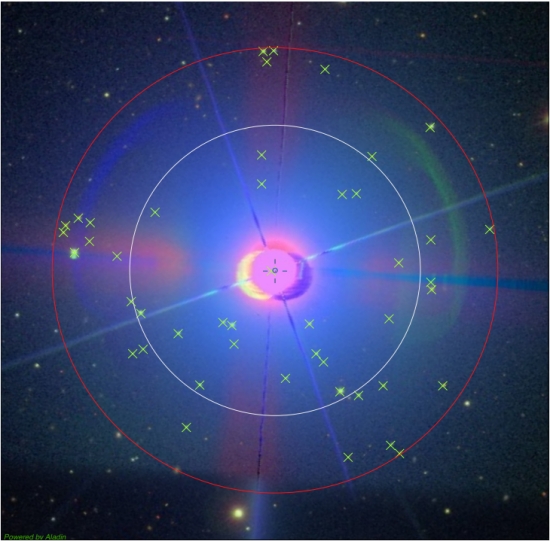 Image: This is Figure 1 from the paper. Caption: . An optical colour image of the stellar field centred on HIP109427 from the Pan-STARRS DR1 z and g broadband filters, showing the extent of the FWHM for the GBT L-band and GBT S-band receivers, circled in red and white respectively. 46 sources with geometric distances calculated from Gaia parallax data are marked with green crosses. Credit: Wlodarczyk-Sroka. Garrett & Siemion.

The Gaia information allowed the researchers to select targets out to 33,000 light years, all found within the original observations, thus expanding the number of stars examined from 1327 to 288,315. Their distance would mean that as the range increased, only more powerful transmitters would be visible to the telescopes. The sample takes in not only many main-sequence stars but extends to giant stars and white dwarfs as well.

Andrew Siemion comments on the significance of the effort:

“This work shows the value of combining data from different telescopes. Expanding our observations to cover almost 220 times more stars would have required a significant investment of our telescope time, not to mention the computing resources to perform the analysis. By taking advantage of the fact that we already had radio scans of stars in the background of our primary targets, and by reading their positions and distances from the Gaia catalog, Bart’s analysis has extracted additional information from the existing dataset. Work like this gets us one step closer to the goal of knowing the answer to humanity’s most profound question: Are we alone?”

Given that the only qualifying criteria for the stars in the new study is that they were within the view of the original observations (i.e., within the FWHM of the telescope beam), the range of stellar types is broad, and this marks the first time scientists have been able to place limits on the prevalence of continuous extraterrestrial transmitters on the basis of spectral type.

In earlier studies, no evidence was found of continuous transmitters associated with stars systems within 50 parsecs of the Sun, given power constraints as explained in the paper:

Both Enriquez et al. (2017) and Price et al. (2020) find no evidence for continuous (100% duty cycle) transmitters associated with the nearby (d < pc) star systems observed. This includes directional transmitters (e.g. radio beacons) directed at the Earth with a power output equal to or greater than the brightest human-made transmitters (e.g. a canonical Arecibo planetary radar-like system with a gain of 70 dB and a transmitter power of ∼ 1 MW). To detect a non-directional isotropically radiating antenna, the transmitter power must be ∼ 1013 W (around the current energy consumption of our own civilisation).

We don’t know if any civilizations in this range are broadcasting at all, but the data are consistent with the statement that fewer than ∼ 0.1% of the stellar systems within 50 pc are using these types of transmitters to contact us. The new work now moves well past the nearby sampling of stars, while factoring in the decrease in sensitivity at larger distances. At 100 to 200 parsecs, for instance, fewer than 0.061 such transmitters can be present, given the same power constraint. We have no candidate signals, but we have hugely widened the scope of the search and tightened the numbers. Wlodarczyk-Sroka comments:

“Our results help to put meaningful limits on the prevalence of transmitters comparable to what we ourselves can build using 21st century technology. We now know that fewer than one in 1600 stars closer than about 330 light years host transmitters just a few times more powerful than the strongest radar we have here on Earth. Inhabited worlds with much more powerful transmitters than we can currently produce must be rarer still.”

Setting constraints is not glamorous work, but it’s how we go about building information. We’ve seen the same phenomenon in exoplanet studies. At Proxima Centauri, scientists progressively drilled down by radial velocity research, first eliminating large gas giants and then progressively smaller worlds as possibilities until finally uncovering Proxima Centauri b, at about Earth size. All the patient data analysis builds the structure needed to arrive at eventual conclusions. When it comes to SETI, we’re learning, bit by bit, what is not there, and also clarifying how much remains to be explored.

As just one case in point: What if the beam is not continuous? Should we expect it to be? See SETI: Figuring Out the Beacon Builders for more on ‘Benford Beacons,’ a topic of frequent discussion in these pages.

The paper is Wlodarczyk-Sroka et al., “Extending the Breakthrough Listen nearby star survey to other stellar objects in the field,” accepted at Monthly Notices of the Royal Astronomical Society (preprint).

Next post: A Deformed Protoplanetary Disk in a Triple Star System