OSIRIS-REx, the little spacecraft with the big acronym (standing for Origins, Spectral Interpretation, Resource Identification, and Security-Regolith Explorer) has been on station for a year and a half at asteroid Bennu, monitoring the unexpected activity that distinguishes the object. Particle ejection from the surface is the subject of a revised special issue of the Journal of Geophysical Research: Planets collecting 10 papers on the matter.

Specifically, the spacecraft has found that particles of rock mostly of pebble-size are being ejected repeatedly — one or two per day — from the asteroid’s surface, some of them escaping into space, some moving into a temporary orbit, with the rest falling back onto the surface. Just days after entering orbit on December 31 of 2018, OSIRIS-REx began to spot the activity, which the introduction to the special issue refers to as “ongoing mass shedding” involving millimeter- to centimeter-scale particles. What we have on our hands here is an asteroid that is active.

“We thought that Bennu’s boulder-covered surface was the wild card discovery at the asteroid, but these particle events definitely surprised us. We’ve spent the last year investigating Bennu’s active surface, and it’s provided us with a remarkable opportunity to expand our knowledge of how active asteroids behave.” 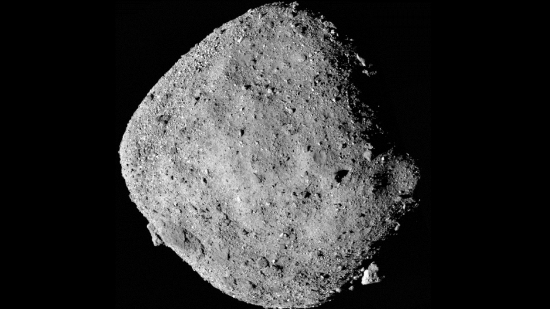 Image: This mosaic image of asteroid Bennu is composed of 12 images collected on Dec. 2, 2018, by the OSIRIS-REx spacecraft’s PolyCam instrument from a range of 24 kilometers. Credit: NASA/Goddard/University of Arizona.

Bennu is another example of the blurring of the distinction between comets and asteroids, the former composed of ice, rock and dust and subject to heating by the Sun during the approach to perihelion that causes the formation of the familiar tail as vapor and dust is carried into space. The rock and dust characteristic of asteroids wouldn’t seem to lend itself to such activity, but the papers here point to thermal fracturing that is the result of repeated heating and cooling as the object rotates as the likely driver. Also implicated: Impacts from meteoroids hitting the surface. From a paper on thermal fatigue by Jamie Molaro (Planetary Science Institute) and colleagues:

If thermal fatigue indeed plays a role in Bennu’s activity, this has broad implications for our understanding of active asteroids and the asteroid population as a whole. Previous works have hypothesized that thermal fracture processes may generate activity on active asteroids with small perihelion distances, such as (3200) Phaethon (Jewitt & Li, 2010). Our results support this hypothesis. With a diurnal temperature variation of hundreds of degrees, Phaethon’s surface is likely to be subject to thermal shock processes, with fatigue operating at depth to weaken and prepare the rock for disruption. However, the fact that thermal fatigue alone may be capable of generating activity suggests that there may be many more active asteroids than are currently known, likely including many in near‐Earth space. With less energetic activity, a lack of tails or comae would make such bodies hard to identify from ground‐based observations, and previous missions to visit asteroids up close lacked the capability to detect ejection events like those observed on Bennu. 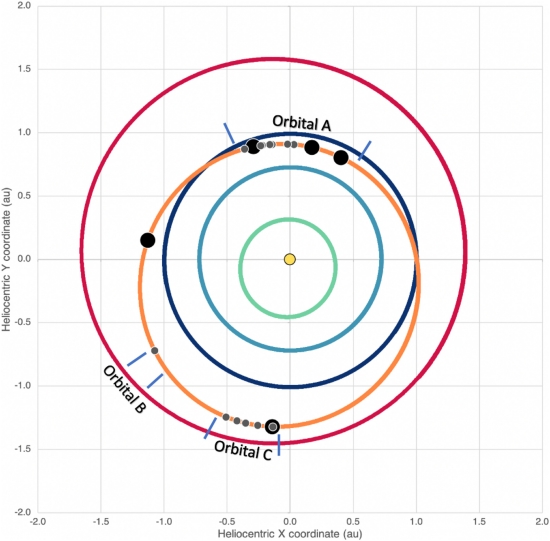 Image: Occurrence of particle ejection events (circles) in the orbit of Bennu (orange). Ejection events of 2 to 19 particles are denoted by small gray circles; events of 20 or more particles are denoted by large black circles. The phases of the OSIRIS‐REx mission that included dedicated particle monitoring (Orbitals A–C) are indicated with blue hatches. The Sun (yellow) and the orbits of Mercury (green), Venus (light blue), Earth (dark blue), and Mars (red) are also shown for reference. Credit: Hergenrother et al. (2020).

Mission scientists have been able to use the unexpected stream of particles as a probe of the asteroid’s gravitational field, for many of them were found to be orbiting much closer than the spacecraft itself, their trajectories sensitive to the irregular gravity of the object. The precision of the measurement is actually higher than would have been possible solely through the instruments aboard OSIRIS-REx. Chesley calls them “an unexpected gift for gravity science at Bennu since they allowed us to see tiny variations in the asteroid’s gravity field that we would not have known about otherwise.”

Remember that this is a sample return mission, with a touchdown planned for October 20 to gather surface material, some of which may contain particles that were ejected and have fallen back to the surface. We can look forward to the spacecraft’s return in September of 2023.

The papers on Bennu are gathered in “Exploration of the Activity of Asteroid (101955) Bennu,” a special edition of the Journal of Geophysical Research: Planets first published in April of 2020 and now updated as of 19 August. The paper quoted above is Molaro et al., “Thermal Fatigue as a Driving Mechanism for Activity on Asteroid Bennu,” JGR Planets 21 July 2020 (abstract).