What Phosphine Means on Venus

A biosignature is always going to create a rolling discussion that gradually homes in on a consensus. Which is to say that the recent discovery of phosphine in the upper atmosphere of Venus has inspired a major effort to figure out how phosphine could emerge abiotically. After all, the scientists behind the just published paper on the phosphine discovery seem to be saying something to the community like “We can’t come up with a solution other than life to explain this. Maybe you can.”

The ‘maybes’ are out there and they include life, but what a tough spot for life to develop, for obvious reasons, not the least of which is the hyper-acidic nature of its clouds. So let’s dig into the story a bit more. The idea of life in the cloud layers of an atmosphere has a long pedigree, even on Venus, where discussions go back at least to the 1960s. Harold Morowitz and Carl Sagan examined the matter in a paper in Science in 1967, a speculation that led them to conclude “it is by no means difficult to imagine an indigenous biology in the clouds of Venus.”

And while the temperature at Venus’ surface can reach 480° Celsius, the temperatures between 48 and 60 kilometers above the surface are relatively benign, in the range of 1° to 90° C. A team led by Jane Greaves (Cardiff University) detected the spectral signature of phosphine through observations at 1 millimeter wavelength made with the James Clerk Maxwell Telescope (JCMT) in Hawaii, later confirmed with data from the Atacama Large Millimeter Array (ALMA) observatory in Chile. The resulting paper is lengthy and judiciously written, as witness:

If no known chemical process can explain PH3 within the upper atmosphere of Venus, then it must be produced by a process not previously considered plausible for Venusian conditions. This could be unknown photochemistry or geochemistry, or possibly life. Information is lacking—as an example, the photochemistry of Venusian cloud droplets is almost completely unknown. Hence a possible droplet-phase photochemical source for PH3 must be considered (even though PH3 is oxidized by sulfuric acid). Questions of why hypothetical organisms on Venus might make PH3 are also highly speculative…

And here again, the note that what we are talking about is unusual chemistry:

Even if confirmed, we emphasize that the detection of PH3 is not robust evidence for life, only for anomalous and unexplained chemistry. There are substantial conceptual problems for the idea of life in Venus’s clouds—the environment is extremely dehydrating as well as hyperacidic. However, we have ruled out many chemical routes to PH3… 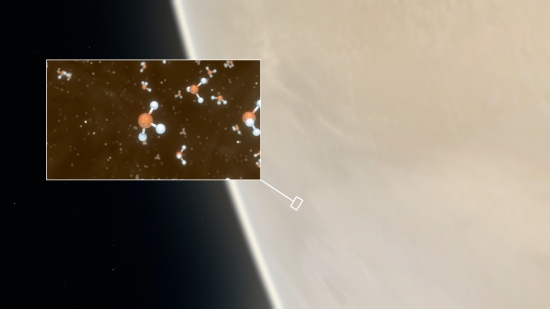 Phosphine is a rare molecule, one that is made on Earth through industrial methods, although microbes that live in environments without oxygen can likewise produce it when phosphate is drawn from minerals or other sources and coupled with hydrogen. MIT researchers have previously investigated it as a potential biosignature, one of a great many studied by Sara Seager and William Bains that we’ll want to use in our investigations of exoplanet atmospheres. It’s clear, though, that no one expected to find it in the clouds of Venus. Greaves explains:

“This was an experiment made out of pure curiosity, really – taking advantage of JCMT’s powerful technology, and thinking about future instruments. I thought we’d just be able to rule out extreme scenarios, like the clouds being stuffed full of organisms. When we got the first hints of phosphine in Venus’ spectrum, it was a shock!… In the end, we found that both observatories had seen the same thing – faint absorption at the right wavelength to be phosphine gas, where the molecules are backlit by the warmer clouds below.”

The international team working on the phosphine detection has investigated everything from minerals drawn into the clouds from the surface to volcanes, lightning, even sunlight, but none of the processes examined made enough phosphine to account for the data. In fact, the abiotic methods could produce at best one ten thousandth of the amount found in the telescope data.

But what a tough place for life to persist given an atmosphere where the high clouds are about 90 percent sulphuric acid. The hostility of the Venusian environment doubles down on the question of whether there are abiotic processes we have yet to consider. Following up on the phosphine detection, a new paper from the MIT researchers homes in on the matter:

(Greaves et al. 2020) have reported the candidate spectral signature of phosphine at altitudes >~57 km in the clouds of Venus, corresponding to an abundance of tens of ppb [parts per billion]. It was previously predicted that any detectable abundance of PH3 in the atmosphere of a rocky planet would be an indicator of biological activity (Sousa-Silva et al. 2020). In this paper we show in detail that no abiotic mechanism based on our current understanding of Venus can explain the presence of ~20 ppb phosphine in Venus’ clouds. If the detection is correct, then this means that our current understanding of Venus is significantly incomplete. 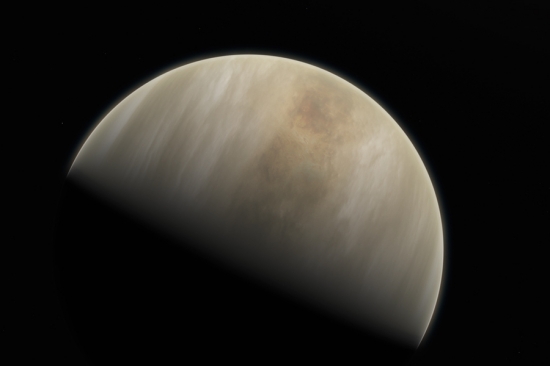 And from MIT co-author Clara Sousa-Silva, who examined phosphine as an exoplanet biosignature in a paper earlier this year, a look at the broader implications:

“A long time ago, Venus is thought to have oceans, and was probably habitable like Earth. As Venus became less hospitable, life would have had to adapt, and they could now be in this narrow envelope of the atmosphere where they can still survive. This could show that even a planet at the edge of the habitable zone could have an atmosphere with a local aerial habitable envelope.”

What a boon this finding will be to those interested in taking our eye off Mars for an astrobiological moment and looking toward the nearest terrestrial planet, for follow-up studies have to include one or more missions to Venus to study its atmosphere, perhaps including some kind of sampling and return to Earth. The MIT paper, Bains et al. as referenced below, includes both Seager and Sousa-Silva as co-authors, along with Cardiff’s Greaves, and bears a title that defines the issue: “Phosphine on Venus Cannot be Explained by Conventional Processes.”

Seager’s work on a wide range of potential biosignatures is definitive and has been examined before in these pages. Anyone interested in the broader question of how we go about defining a biosignature needs to get conversant with her “Toward a List of Molecules as Potential Biosignature Gases for the Search for Life on Exoplanets and Applications to Terrestrial Biochemistry,” Astrobiology, June 2016, 16(6): 465-485 (abstract).

So perhaps life, or perhaps a yet undiscovered mechanism for producing phosphine on Venus. Either way, the path forward includes an examination of a possible paradigm shift — the authors use this phrase — involving not just Venus but terrestrial planets in general. And I think we can assume that laboratory work on phosphorous chemistry is about to get a major boost.

The paper is Greaves et al., “Phosphine gas in the cloud decks of Venus,” Nature Astronomy 14 September 2020 (abstract). The MIT paper is Bains et al., “Phosphine on Venus Cannot be Explained by Conventional Processes,” submitted to Astrobiology – Special Collection: Venus (preprint). The Sousa-Silva paper on phosphine is “Phosphine as a Biosignature Gas in Exoplanet Atmospheres,” Astrobiology Vol. 20, No. 2 (31 January 2020). Abstract.

Next post: Odds and Ends on the Clouds of Venus