The Hubble Deep Field images of 1995 and 1998 gave us an unprecedented look at a small patch of sky with few nearby bright objects, a region about one-tenth the diameter of the full Moon in the constellation Fornax. The ensuing Hubble Ultra Deep Field, released in 2004, contains as many as 10,000 individual galaxies. Hubble’s Advanced Camera for Surveys (ACS) was deployed for this, as well as its Near Infrared Camera and Multi-object Spectrometer (NICMOS), producing a stunning harvest of elliptical and spiral galaxies, as well as oddly shaped collections of stars from the chaotic early days of the universe. 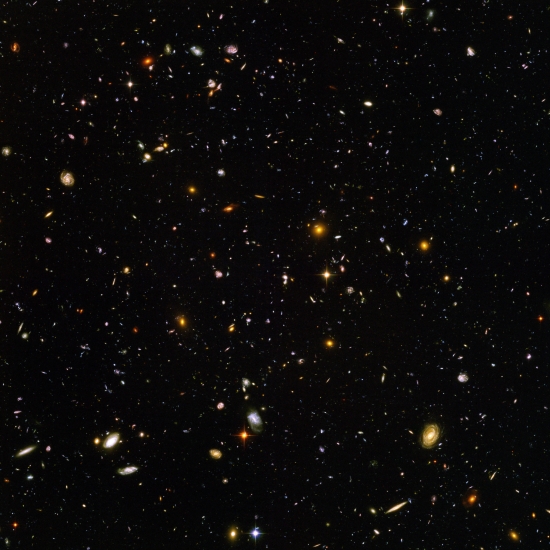 Image: The original NASA release image of the Hubble Ultra Deep Field, containing galaxies of various ages, sizes, shapes, and colors. The smallest, reddest galaxies, of which there are approximately 10,000, are some of the most distant galaxies to have been imaged by an optical telescope, probably existing shortly after the Big Bang. Credit: NASA/ESA.

I immediately thought of a Brian Aldiss title when I first saw the HUDF: Galaxies Like Grains of Sand came out in 1960, a collection of previously published stories later linked into a kind of future history. The grains of sand analogy always captures the imagination — most of us have walked on beaches. But here all sense of scale seems to drop away.

How many planets are there around stars in the visible universe? How many galaxies? Astronomers and mathematicians work routinely with the kind of numbers involved here, but for us civilians, I don’t think it’s possible to emotionally comprehend such immensity. The Hubble Deep UV (HDUV) Legacy Survey image, released in 2015, ups the catch to 15,000 galaxies.

Tiny lights in the sky dwarf us whether they are stars or galaxies. It was imagery from TESS, our Transiting Exoplanet Survey Satellite, that brought on these reflections. Have a look at the starfield below. TESS has discovered 74 planets at this point, with another 1200 awaiting confirmation in an ongoing mission to examine nearby stars. The field of view is 400 times larger than what Kepler could cover in its tight stare in the direction of Cygnus and Lyra, but both missions rely on the transit method, detecting the presence of a planet crossing in front of its star in the stellar lightcurve. We’re going to get a lot of planets out of TESS, but among the targeted, nearby stars, probably around 1200 to 1500.

Stars like grains of sand. Here we’re looking toward Cygnus, back in Kepler country, and the sky is a glory of objects even if TESS will have a gap in coverage in the northern hemisphere, given an attempt by the science team to minimize the effects of scattered light from the Earth and the Moon. A mosaic of the southern coverage takes in more sky.

Image: This detail of the TESS northern panorama features a region in the constellation Cygnus. At center, the sprawling dark nebula Le Gentil 3, a vast cloud of interstellar dust, obscures the light of more distant stars. A prominent tendril extending to the lower left points toward the bright North America Nebula, glowing gas so named for its resemblance to the continent. Credit: NASA/MIT/TESS and Ethan Kruse (USRA).

The TESS numbers are already robust, with each of 13 northern hemisphere sectors imaged for nearly a month with four cameras, each of the latter with 16 charge-coupled devices (CCD). That adds up to 38,000 full science images for each of the CCDs, a total of 40 terabytes of data. It’s exhilarating to realize that these numbers are about to jump as TESS goes into its extended mission, revisiting the southern sky for another year, while relying upon improvements in data collection and processing that will return full-sector images every 10 minutes, as opposed to the earlier 30. TESS measures tens of thousands of stars, says NASA, every two minutes.

“These changes promise to make TESS’s extended mission even more fruitful,” said Padi Boyd, the mission’s project scientist at NASA’s Goddard Space Flight Center in Greenbelt, Maryland. “Making high-precision measurements of stellar brightness at these frequencies makes TESS an extraordinary new resource for studying flaring and pulsating stars and other transient phenomena, as well as for exploring the science of transiting exoplanets.” 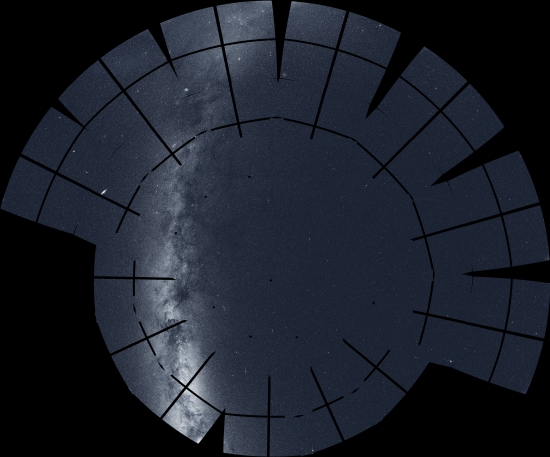 Image: This mosaic of the northern sky incorporates 208 images taken by NASA’s Transiting Exoplanet Survey Satellite (TESS) during its second year of science operations, completed in July 2020. The mission split the northern sky into 13 sectors, each of which was imaged for nearly a month by the spacecraft’s four cameras. Among the many notable celestial objects visible: the glowing arc and obscuring dust clouds of the Milky Way (left), our home galaxy seen edgewise; the Andromeda galaxy (oval, center left), our nearest large galactic neighbor located 2.5 million light-years away; and the North America Nebula (lower left), part of a stellar factory complex 1,700 light-years away. The prominent dark lines are gaps between the detectors in TESS’s camera system. Credit: NASA/MIT/TESS and Ethan Kruse (USRA).

Does anyone ever get jaded with the sheer numbers we talk about as we delve into the cosmos? I suppose a kind of workaday numbness may occasionally settle in, and I suppose it would happen as well to geologists, for example, when trying to wrap their heads around the deep time suggested by the varied strata that first gave scientists a glimpse of how old the Earth really was. I just finished reading Hugh Raffles’ extraordinary The Book of Unconformities, a startling look not only into deep time but the landscape of loss as Raffles confronts twin deaths in his family that came seemingly out of nowhere. All of this against the background of stone considered at geologically significant sites. A taste of this:

At Siccar Point on the east coast of Scotland, a path leads precipitously down the cliff to Hutton’s Unconformity, the line of contact between the two rocks that James Hutton showed the mathematician John Playfair and the experimental geologist Sir James Hall on that memorable June day in 1788. It’s the physical proof of a gap in time, in this case the gap between the Silurian graywackes that formed 440 million years ago on the seafloor at the margins of the Iapetus Ocean (ancient ocean of the Southern Hemisphere) and were forced upward as the vast water body closed, and the Devonian Old Red Sandstone that was laid down on their eroded surface sixty-five million years later by rivers flowing into what was then most likely a tropical floodplain.

Thus modern geology was born. Hutton found in Siccar Point layered sandstone pierced by gray metamorphic rock that would confirm his belief that the Earth was far older than European natural scientists had ever expected. Playfair would later write: “The mind seemed to grow giddy by looking so far back into the abyss of time; and whilst we listened with earnestness and admiration to the philosopher who was now unfolding to us the order and series of these wonderful events.”

There should be a word that signifies the mind all but buckling with the wild surmise of the scale of things. In the late 18th Century, a notion of the ‘sublime’ began to re-emerge in European thought, one suggested by the grandeur of jagged alpine landscapes, for example, but today’s usage of the word doesn’t take in the aspect of dislocation, even disorientation, that such landscapes were freighted with back then, mingling with profundity. Go back to that earlier usage, though, and I’ll maybe opt for ‘sublime’ as the right word to suggest my own response to such imagery.