The Galactic Bulge: A Single Burst of Star Formation?

Discussions of the Milky Way’s center have always attracted me. Here we find ancient stars, with all that suggests about the possibility of long-lived civilizations, but occurring in a place where ionizing radiation associated with the galaxy’s supermassive black hole (Sagittarius A*) may push the habitable regions out into the galactic suburbs. And then there are all those supernovae to contend with! Maybe life in these parts is, if present, single-celled, perhaps underwater, with brief land colonization before new extinction events erase it.

Whatever the case, I’m learning that the galaxy’s central bulge is inspiring a new wave of study. A survey of millions of stars there is producing insights into how the bulge originally formed. We can look at spiral galaxies near and far and find commonality in their central bulge of stars surrounded by the familiar disk, but if the bulge stars formed in a single burst of activity, we could be seeing a population as old as 10 billion years in our home galaxy. But it has also been argued that waves of star formation have occurred in the bulge, so that some stars there may constitute a population as relatively ‘young’ as three billion years, younger than the Sun.

Image: This photo looking toward the center of the Milky Way galaxy covers 0.5 by 0.25 degrees on the sky and contains over 180,000 stars. The image captures a portion of our galaxy about 220 by 110 light-years across. It was taken with the Dark Energy Camera on the Victor M. Blanco 4-meter Telescope at the Cerro-Tololo Inter-American Observatory in Chile, a Program of NSF’s NOIRLab. Credit: CTIO/NOIRLab/NSF/AURA/STScI, W. Clarkson (UM-Dearborn), C. Johnson (STScI), and M. Rich (UCLA).

The new study begins to untangle the contrasting theories of bulge star formation. It is in the hands of co-principal investigators Christian Johnson (Space Telescope Science Institute) and Michael Rich (UCLA), who used the wide-field Dark Energy Camera (DECam) on the 4-meter Victor M. Blanco instrument at Cerro Tololo in Chile to capture 3 square degrees of sky with each exposure. 250 million stars fall into the field of these observations. All told, more than 450,000 photographs have been produced and the chemical compositions of over 70,000 stars analyzed, as described in two papers on this work. Johnson describes the study:

“Our survey is unique because we were able to scan a continuous section of the bulge at wavelengths of light from ultraviolet to visible to near-infrared. That allows us to get a clear understanding of what the various components of the bulge are and how they fit together.”

What Johnson and Rich find is that most stars in the central 1,000 light years of the galaxy’s hub formed more than 10 billion years ago, perhaps triggered by a merger with another galaxy in formation, or else through accretion of infalling gas and dust. The work proceeded by analyzing the stars’ chemical compositions, which produced interesting results. Stars in this region have roughly the same metallicity (elements higher than hydrogen and helium) as the Sun. In other words, these ancient stars are somehow enriched in metals. Here’s Rich:

“Something different happened in the bulge. The metals there built up very, very quickly, possibly in the first 500 million years of its existence.” 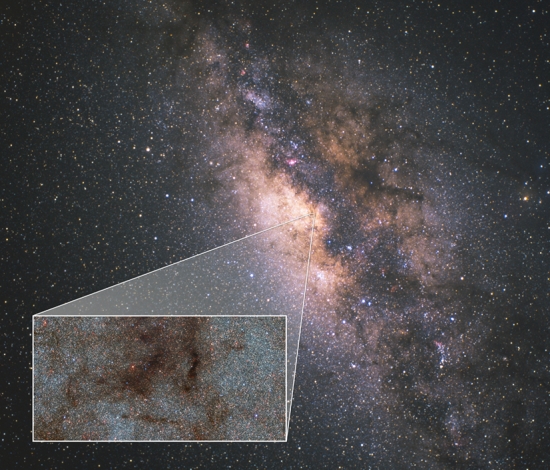 Measuring stellar brightness at different wavelengths — near-ultraviolet, optical, and near-infrared — is the key to the researchers’ method, with the ultraviolet data taking precedence. Differences in brightness depending on wavelength define photometric colors, which can be used to reveal the composition of stars when the data are calibrated against spectroscopic measurements. Stars forming at different times, we would expect, would show different levels of metallicity, but in this 1,000 light-year region, the distribution of metals is similar. Theories suggesting multiple phases of star formation over billions of years seem ruled out. From the paper:

…little physical motivation exists regarding why the bulge should be a composite of two or more populations that each have a relatively narrow, normally distributed metallicity distribution function. Systems composed of two or more populations with narrow, normally distributed metallicity distributions do exist in nature, but such objects often show extreme heavy element abundance variations that are indicative of a prolonged period of ‘bursty’ star formation and self-enrichment, particularly from low- and intermediate-mass AGB stars (e.g. ω Cen; Johnson & Pilachowski 2010; Marino et al. 2011b). The Galactic bulge shows no evidence supporting this type of enrichment pattern.

The stars analyzed in this region of the galactic bulge are enriched in metals despite their age, with a distribution of metals clustered around a single average. We seem to be looking at a single burst of star formation here. The full dataset for the Blanco DECam Bulge Survey will soon be released, offering a major resource for those investigating stellar populations within the inner disk and the galactic bulge that will be useful when combined with other imaging surveys. Up next for the authors is research into any correlations between metallicity and stellar orbits, which could uncover the remains of dwarf galaxies disrupted in this ancient phase of star formation.

Next post: Getting Ready for Dragonfly: Titan’s Impact Craters