With successful operations at Ryugu (Hayabusa2) and Bennu (OSIRIS-REx), asteroid exploration seems to be moving full tilt, with the prospect of surface samples on the way. We can also look ahead to 16 Psyche, the object of interest for a NASA mission planned to launch in 2022, and the Lucy mission to Jupiter’s trojan asteroids, with launch now scheduled for 2021. The latest asteroid entry comes in the form of an interesting collaboration between the Japan Aerospace Exploration Agency (JAXA) and the German Aerospace Center (DLR) targeting asteroid 3200 Phaethon, a flyby mission designed to launch no earlier than 2024.

DESTINY+ is its name, the acronym standing for Demonstration and Experiment of Space Technology for INterplanetary voYage with Phaethon fLyby and dUst Science (try to say all that quickly before you’ve had your morning coffee). The agreement for the bilateral mission was signed on November 11 as part of a joint strategy dialogue between the two space agencies.

The new mission continues German and Japanese cooperation in space. You may recall that DLR and the French space agency CNES (National Center for Space Studies) developed the MASCOT rover that was deployed on Ryugu in 2018, with several papers already published on its findings. The BepiColombo mission to Mercury grows out of ESA and Japanese collaboration, while the proposed Martian Moons eXploration (MMX) mission, developed by JAXA, will include a rover developed by DLR and CNES, along with scientific instrumentation from NASA.

At Phaethon, we’re looking at an interesting object, an Apollo asteroid that appears to be the parent body of the Geminids meteor shower. The Apollo asteroids are the largest group of near-Earth objects, numbering over 10,000, but among them, Phaethon has a special claim to fame. Carsten Henselowsky is DESTINY+ project manager at DLR:

“With a minimum approach distance of approximately 21 million kilometres, Phaethon gets closer to the Sun than the planet Mercury. In the process, its surface heats up to a temperature of over 700 degrees Celsius, causing the celestial body to release more dust particles. The aim of the DESTINY+ mission is to investigate such cosmic dust particles and to determine whether the arrival of extraterrestrial dust particles on Earth may have played a role in the creation of life on our planet.”

The flyby will take the spacecraft to within 500 kilometers of Phaethon at a time in its orbit when the asteroid is approximately 150 million kilometers from the Sun. Key to the success of the mission is the DDA dust analyzer built by DLR (DESTINY+ Dust Analyzer). The plan is to study the dust environment through the entire four-year cruise to Phaethon, with projected flyby in 2028. The DDA is, according to this recent presentation at the Europlanet Science Congress, “the technological successor to the Cosmic Dust Analyzer (CDA) aboard Cassini-Huygens, which prominently investigated the dust environment of the Saturnian system.”

With the goal of determining the origin of each dust particle, mission scientists will be focusing on the proportion of organic matter given the possible delivery of organics to the early Earth by such particles. The asteroid is on a highly eccentric orbit resembling that of a comet more than an asteroid, crossing the orbits of Mercury, Venus, Earth and Mars. Dust tails have been observed coming from the object, likely the result of solar heat creating surface fractures.

Launch will be aboard an Epsilon S vehicle from the Uchinoura Space Center in Japan. The spacecraft will use solar-electric propulsion, with a 1.5-year period after launch in which it will raise its orbit. A series of lunar flybys will then accelerate the probe into an interplanetary trajectory. The scientific payload will, in addition to the dust analyzer, include two cameras: The Telescopic Camera for Phaethon (TCAP) and the Multi-band Camera for Phaethon, MCAP.

By chance, I ran across a passage this morning in Oliver Morton’s book The Moon: A History for the Future (The Economist, 2019) that explains why it takes so long to get to objects that, like NEAs, sound as though they should be nearby. Such serendipity coaxes me into quoting it:

…what matters in space is delta-v, not distance. To get from the Moon to the Earth requires only about a fifth of the delta-v that is needed to make the same journey in the opposite direction. Another demonstration of this proposition is that the amount of delta-v it takes to get a spacecraft to the surface of the Moon can also get it to destinations much farther afield. “Near-Earth asteroids” (NEA) are only near inasmuch as they have orbits that very occasionally bring them moderately close to the Earth. At any given time a typical NEA will be 100 or 200 times as far away as the Moon. But in terms of delta-v, quite a lot of these asteroids are just as easy to reach as the Moon is; it is just a matter of getting on to the right trajectory and waiting. Indeed, it takes no more delta-v to reach the little moons of Mars than it does the great Moon of Earth (the surface of Mars is another matter). 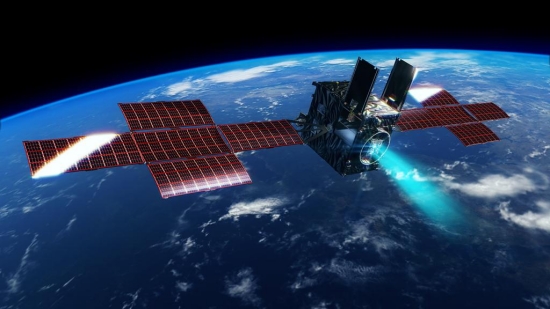