Simultaneous Growth of Star and Planet?

The evolving system known as [BHB2007] 1 is a part of the Pipe Nebula (also called Barnard 59), about 600 light years away in the constellation Ophiuchus. It is part of a binary star system in formation that has been studied with the Atacama Large Millimeter Array (ALMA). Both protostars show disks in formation around them, surrounded by filaments of gas and dust drawn from the larger disk that are being referred to as ‘feeding filaments.’ Paola Caselli (Max Planck Institute for Extraterrestrial Physics, Germany), who made that reference in 2019, is co-author of new work on the stellar object, which gives us an unusual look at early system formation. 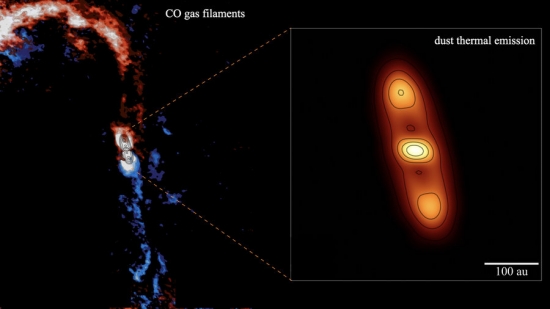 Image: This false-color image shows the filaments of accretion around the protostar [BHB2007] 1. The large structures are inflows of molecular gas (CO) nurturing the disk surrounding the protostar. The inset shows the dust emission from the disk, which is seen edge-on. The “holes” in the dust map represent an enormous ringed cavity seen sideways in the disk structure. Credit © MPE.

This is apparently a case of star and planet growing in tandem. The young stellar object [BHB2007] 1 is thought to be no older than 1 million years, with most of the surrounding envelope having dissipated and clear emission visible from the circumstellar disk. The authors note the clean, wide gap in the dust, adding that it is surprising for such a young system, for accretion from the molecular cloud seems to be continuing, as the filament activity makes clear.

Most circumstellar disks in this age range are fully formed as planet formation begins. Felipe Alves (MPE) is lead author on the paper, which has just appeared in Astrophysical Journal Letters:

“We were quite surprised to observe such prominent accretion filaments falling into the disk. The accretion filament activity demonstrates that the disk is still growing while simultaneously nurturing the protostar.”

Supplementing the ALMA data with observations at radio frequencies from the Very Large Array, the researchers make the case for a young giant planet or perhaps a brown dwarf present within a 70 AU cavity inside the disk, a zone filled with hot molecular gas. Planetary accretion of an object between 4 and 70 Jupiter masses would produce the disk gap. 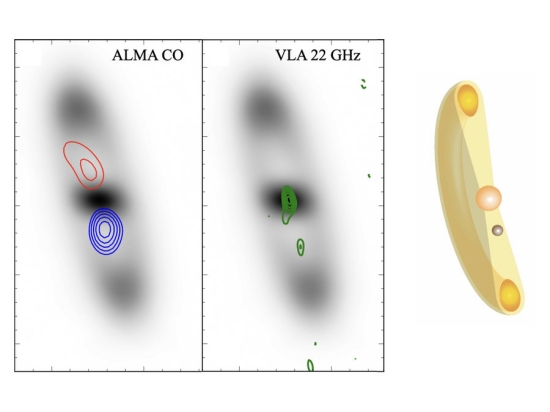 Image: Two different observations of the protoplanetary disk show signatures of the formation of a companion to the protostar . The grey scale represents the dust thermal emission from the disk, same as in the inset of Fig. 1. The red/blue contours show the molecular CO brightness emission levels from the northern/southern side of the dust cavity observed with ALMA. The brighter CO emission from the south indicates that the gas is hotter there. This location coincides with a zone of non-thermal emission tracing ionised gas (green contours) observed with the VLA (middle), which is observed in addition to the protostar (centre of the image). The team proposes that both the ionised gas and the hot molecular gas are due to the presence of a protoplanet or a brown dwarf in the cavity. The configuration of such a system is shown in the sketch on the right. Credit: © MPE; illustration: Gabriel A. P. Franco.

MPE’s Caselli explains the significance of the finding:

“We present a new case of star and planet formation happening in tandem. Our observations strongly indicate that protoplanetary disks keep accreting material also after planet formation has started. This is important because the fresh material falling onto the disk will affect both the chemical composition of the future planetary system and the dynamical evolution of the whole disk.”

Studying star and planet formation together gives us interesting constraints for how young systems evolve out of the original cloud surrounding them. [BHB2007] 1 gives us the kind of gap in a circumstellar disk we’ve observed in other young systems, but in this case it’s a disk still being actively fed by filaments from the surrounding molecular cloud. In at least one case, then, we see the possible formation of planets before the disk itself has fully formed. The existence of an object in formation is supported by VLA’s data on radio emission within the dust gap between the inner and outer disk, giving heft to the assertion that simultaneous formation is occurring.

Next post: Exoplanet Imaging via a Fast New Camera