Deep Future: The Next Supercontinent

Science fiction writers range freely through time, making many scientific papers fertile ground for plot ideas and settings. So here’s an extraordinary one. We know that Earth’s continents used to be packed into a single large land mass called Pangaea, which is thought to have broken apart about 200 million years ago as tectonic plates shifted. Interestingly, we can expect a remote future in which the continents will have once again come together, as Michael Way (NASA GSFC) has pointed out at an online poster session at the ongoing virtual meeting of the American Geophysical Union. And such a supercontinent has ramifications for habitability.

Let’s talk about those because they have a bearing on astrobiology as we examine exoplanets and consider their suitability for life. We’re a decade or so (at minimum) away from being able to determine how land and sea are distributed on a nearby world, but climate modeling is useful as we look toward estimating habitability. That involves, as this work shows, investigating how land masses are positioned on a planetary surface and their effects on climate in the habitable zone.

Working with Hannah Davies and Joao Duarte (University of Lisbon) and Mattias Green (Bangor University, Wales), Way has run 3D global climate models which are, according to Columbia University’s Earth Institute (where Way is an affiliate) the first models made on a supercontinent in the deep future. Out of this the scientists derive two likely outcomes. The first, occurring in the modeling in about 200 million years, is a merging of all continents except Antarctica around the north pole, forming the supercontinent ‘Amasia.’

With heat not being conveyed as efficiently from equator to pole, the poles become colder and remain covered in ice all year long, reflecting significant heat into space. Amasia, according to Way, produces “a lot more snowfall. You get ice sheets, and you get this very effective ice-albedo feedback, which tends to lower the temperature of the planet.”

You also get lower sea levels in the Amasia scenario, with more water trapped in the ice caps. Less land is available for agriculture in a supercontinent with predominantly snowy conditions. 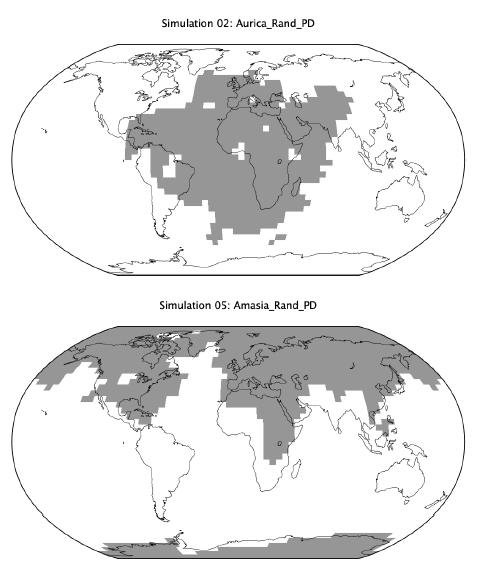 Image: How land could be distributed in the Aurica supercontinent (top) versus Amasia. The future land configurations are shown in gray, with modern-day outlines of the continents for comparison. Credit: Way et al. 2020.

Aurica turns out to be a more clement place, absorbing the stronger sunlight at the equator and, without ice caps at the poles to reflect heat, having a higher global temperature. The setting sounds like it would be ideal save for the fact that, according to the 3D models, the inland areas would be dry. What the scientists have not yet examined is the kind of precipitation patterns that might emerge. Large lakes would offset the effect, so it would be useful to know how likely they are.

All told, the work is pointing to temperatures suitable for liquid water on about 60 percent of Amasia’s land, while 99.8 percent of Aurica’s terrain should be available. We come back to land mass arrangements as a factor in planetary habitability, given our reliance on habitable zone models that insist on the presence of liquid water on the surface. Building a library of land mass distributions and examining their varying effects may help us tune our notions of habitability.

I’ll add that Way’s investigations using the GISS [Goddard Institute for Space Studies] General Circulation Model and expanding it to model paleo- and now future Earth have also extended to models of early Mars and Venus, with plans to examine Titan’s atmosphere. What our own planet has to teach us about climate, habitability and continental arrangement is thus extended to other worlds as the model evolves. One day soon we’ll add exoplanets into the mix.

Next post: Distinguishing Between Biological and Machine Civilization Techno-signatures

Previous post: Musings on Fusion and the Interstellar Ramjet