Ryugu is classified as a carbonaceous, or C-type asteroid, a class of objects thought to incorporate water-bearing minerals and organic compounds. Carbonaceous chondrites, the dark carbon-bearing meteorites found on Earth, are thought to originate in such asteroids, but it has been difficult if not impossible to determine the source of most individual meteorites.

Hence the significance of the Hayabusa2 mission. JAXA’s successful foray to Ryugu represents the first time we’ve been able to examine a sample of a C-type asteroid through direct collection at the site. Ralph Milliken is a planetary scientist at Brown University, where NASA maintains its Reflectance Experiment Laboratory (RELAB). The laboratory expects samples collected at Ryugu to arrive in short order. Milliken is interested in the history of water in the object:

“One of the things we’re trying to understand is the distribution of water in the early solar system, and how that water may have been delivered to Earth. Water-bearing asteroids are thought to have played a role in that, so by studying Ryugu up close and returning samples from it, we can better understand the abundance and history of water-bearing minerals on these kinds of asteroids.”

Milliken is also one of many co-authors on a new paper in Nature Astronomy looking at the thermal history of subsurface materials exposed on Ryugu. The paper examines data the spacecraft collected during its operations there, which can now be compared to the sample collection. We learn that the asteroid may not be as water-rich as originally thought, leading to various scenarios about how it might have lost its water. High on the list of possibilities is that this ‘rubble pile’ asteroid — essentially loose rock maintaining its shape because of gravity — dried after a collision or other disruption and subsequent reformation. 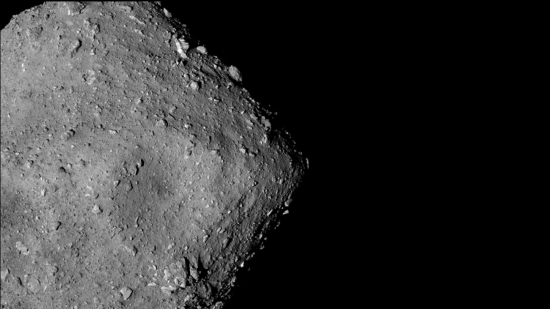 Image: Japan’s Hayabusa2 spacecraft snapped pictures of the asteroid Ryugu while flying alongside it two years ago. The spacecraft later returned rock samples from the asteroid to Earth. Credit: JAXA.

Bear in mind how Hayabusa2 proceeded with its sampling at Ryugu. During the 2019 rendezvous, the spacecraft fired a projectile into the asteroid’s surface that exposed the subsurface rock examined here. A near-infrared spectrometer was used to compare the water content of the surface with the material below, showing the two to be similar in water content. The authors see that as a clue that Ryugu’s parent body dried out, rather than the surface of Ryugu being dried out by the Sun, perhaps in a close solar pass earlier in its history.

In other words, heating by the Sun in one or more close solar passes would be likely to occur at the surface, without penetrating deep into the asteroid. What Hayabusa2’s spectrometer shows is that surface and sub-surface are both comparatively dry, which is an indication that it was the parent body of Ryugu, rather than an event happening to Ryugu itself, that produced this result.

Ahead for the Ryugu analysis is the need to study the size of the particles excavated from below the surface, which could play a role in how the spectrometer measurements are interpreted.

“The excavated material may have had a smaller grain size than what’s on the surface,” says Takahiro Hiroi, a senior research associate at Brown and another study co-author. “That grain size effect could make it appear darker and redder than its coarser counterpart on the surface. It’s hard to rule out that grain-size effect with remote sensing.”

The beauty of the successful sample return is that hypotheses about Ryugu’s past can now be evaluated through comparison of the remote sensing data and actual laboratory work. These are exciting times indeed for the scientists studying the extensive collection of asteroid debris Hayabusa 2 brought back. We can expect significant papers on all this in 2021.