A French company called Exotrail has been working on electric propulsion systems for small spacecraft down to the CubeSat level. As presented last week at the 13th European Space Conference in Brussels, the ExoMG Hall-effect electric propulsion system was flown in a demonstration orbital mission in November, launched to low-Earth orbit by a PSLV (Polar Satellite Launch Vehicle) rocket. A brief nod to the PSLV: These launch vehicles were developed by the Indian Space Research Organisation (ISRO), and are being used for rideshare launch services for small satellites. Among their most notable payloads have been the Indian lunar probe Chandrayaan-1, and the Mars Orbiter Mission called Mangalyaan.

Hall-effect thrusters (HET) trap electrons emitted by a cathode in a magnetic field, ionizing a propellant to create a plasma that can be accelerated via an electric field. The technology has been in use in large satellites for many years because of its high thrust-to-power ratio.

What catches my eye about ExoMG is its size, about that of a 2-liter bottle of soda as opposed to conventional Hall-effect thrusters that weigh in at refrigerator size and demand kilowatts of power. The Exotrail thruster, which was successfully fired during the November mission, runs on about 50 watts of power, and appears to be a propulsion system that can adapt to satellites in the range of 10 to 250 kg. Collision avoidance and deorbiting for satellites in the CubeSat range as well as flexible orbital operations become feasible with this technology. 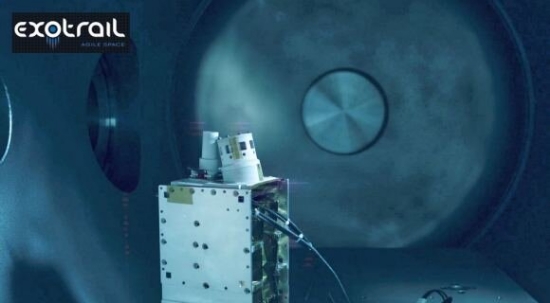 The company is calling ExoMG “the first ever Hall-effect thruster operating on a sub-100kg spacecraft,” and points to four missions slated to fly with the technology in 2021. I’m interested in how the diminutive thruster can be employed in constellations of satellites. We already rely on satellites working together as a system — GPS is a classic example. The needs of navigation and communication force the issue. Think Iridium and Globalstar in terms of telephony, or the Russian Molniya military and communications satellites. The list could be easily extended.

So what we have evolving is a set of constellation technologies with immediate application to satellites in low-Earth orbit. Exotrail talks about “high coverage telecommunication constellations or high revisit rate earth observation constellations at 600-2000km altitude,” enabled by orbit-raising via the new thrusters as well as necessary de-orbiting capabilities, but we should be looking as well at the controlling software and thinking in longer timeframes. Satellites working together is the theme.

Increasing miniaturization coupled with artificial intelligence and next-generation electric thrusters can be enablers for planetary probes flying in swarm formation in the outer system, perhaps using sail technologies as the primary propulsion to get them there. The one-size fits all purposes mission begins to give way to a fleet approach, tiny probes networking their data as they operate at targets as interesting as Neptune and Pluto. It’s also worth noting that the entire Breakthrough Starshot concept calls for not one but an armada of small sails in interstellar space, offering a hedge against catastrophic failure of any one craft, and conceivably drawing on swarm technologies that could facilitate data gathering and return.

So I keep an eye on near-term technologies that explore this space of miniaturization, efficient orbital adjustment and constellation operations. It will be intriguing to see how Exotrail’s operational software (called ExoOPS) deals with the interactions of such constellations. Likewise interesting is last fall’s firing of the European Space Agency’s Helicon Plasma Thruster, which ESA presents as a “compact, electrodeless and low voltage design” optimized for propulsion in small satellites, including “maintaining the formation of large orbital constellations.”

The HPT achieved its first test ignition back in 2015 at ESA’s Propulsion Laboratory in the Netherlands, and has been under development in terms of improved levels of ionization and acceleration efficiency ever since, using high-power radio frequency waves, as opposed to the application of an electrical current, to render propellant into a plasma for acceleration. 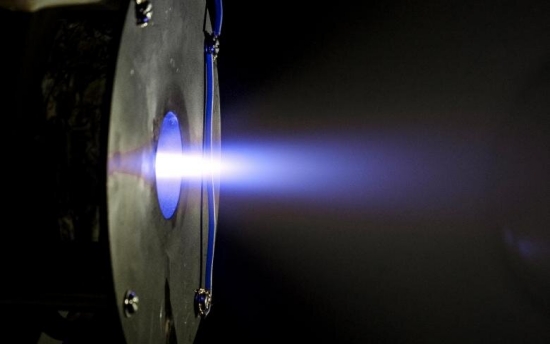 Image: A test firing of Europe’s Helicon Plasma Thruster, developed with ESA by SENER and the Universidad Carlos III’s Plasma & Space Propulsion Team (EP2-UC3M) in Spain. This compact, electrodeless and low voltage design is ideal for the propulsion of small satellites, including maintaining the formation of large orbital constellations. Credit: SENER.

Where will constellation and formation flying in Earth orbit take us as we adapt them for environments further out? Will we one day see deep space swarms of Cubesat-sized (and smaller) craft exploring the outer planets?

Next post: Was the Wow! Signal Due to Power Beaming Leakage?