This seems to be the week of unusual configurations. Following up on TRAPPIST-1 and TOI-178 comes TYC 7037-89-1, where we have fully six stars in a single system, all of which participate in eclipses. In other words, what TESS has revealed is a system consisting of three eclipsing binaries. It’s located about 1,900 light years out in Eridanus, and if it doesn’t remind you of Isaac Asimov’s “Nightfall,” nothing will. In the story (published in the September 1941 issue of Astounding Science Fiction), the planet Lagash is illuminated almost constantly by one of the six stars in its system. The discovery of what happens when it is not — which occurs every 2,000 years or so — drives the plot of one of Asimov’s best tales. 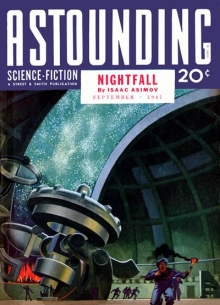 TYC 7037-89-1 (also known as TIC 168789840), marks the first time a six-star system has been found where all the stars are involved in eclipses as seen from our vantage point. This leads to complicated orbital dynamics. With the three binaries designated A, B and C, we learn that the two stars making up A and C respectively orbit each other every day and a half, as measured by the dip in system brightness when one star passes in front of another. The A and C binaries, in turn, orbit each other on a timeframe of about four years.

But we’re not through. The binary B also has two members, which orbit each other every eight days. This pair is considerably further away, so that it orbits the two inner binaries every 2,000 years or so (there goes Asimov again). All three binaries have primary stars a bit larger and more massive than the Sun, with the secondary stars in all three cases being about half the Sun’s size, and no more than a third as hot. The remarkable point is that to detect all three binaries, we have to have orbital planes aligned with our observations from TESS, and this is occurring despite their wide separation. Have a look at all this in the diagram below. 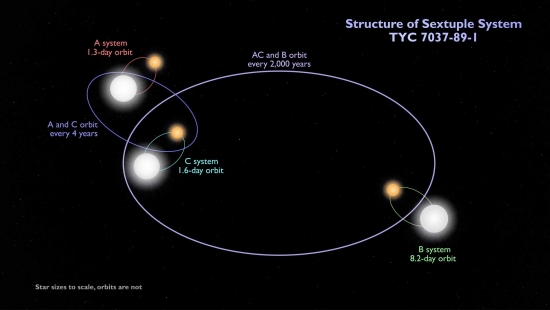 Image: This schematic shows the configuration of the sextuple star system TYC 7037-89-1. The inner quadruple is composed of two binaries, A and C, which orbit each other every four years or so. An outer binary, B, orbits the quadruple roughly every 2,000 years. All three pairs are eclipsing binaries. The orbits shown are not to scale. Credit: NASA’s Goddard Space Flight Center.

“Multiply-eclipsing multiple systems such as TYC 7037-89-1 enable simultaneous, precise measurements on the stellar sizes, temperatures, and potentially masses, of pairs of stars that share common history. In turn, this provides better understanding of stellar formation and evolution in dynamically-rich environments.”

TYC 7037-89-1 naturally raises questions about how such a system formed and provides a useful laboratory for the study of orbital interactions in such complex scenarios. And while it’s not the first six-star system we’ve found, it’s the first to show three eclipsing binaries. From the paper:

TIC 168789840 is a fascinating system that naturally merits additional observation and analysis. Though quite similar to the famous Castor system, the “triplet” nature of TIC 168789840 combined with the presence of three primary and three secondary eclipses enable further investigations into its stellar formation and evolution. Remarkable objects like TIC 168789840 or Castor give us insights on the formation of multiple systems — a matter of active research and debate. It is well known that components of hierarchical systems have correlated masses (Tokovinin 2018a), suggesting accretion from a common source. On the other hand, disk fragmentation and subsequent migration, driven by accretion, appears to be the dominant mechanism of close binary formation…

One possible model discussed in the paper: A binary star captures a third star, with subsequent fragmentation of each of the stars:

With regard to TIC 168789840, we might think that an encounter of the young binary AC with another star B led to its capture on a wide orbit, while strong accretion from the unified envelope, caused by this dynamical event, formed seed secondary companions to all stars by disk fragmentation. The seeds continued to grow and migrate inward, while the intermediate and outer orbits also evolved.

That, of course, is one among a cluster of possibilities to be investigated as more candidate multi-star systems are analyzed. The paper points out that another sextuple system is to be analyzed in a forthcoming paper, which will make a useful point of comparison. Meanwhile, we’re reminded again of the power of artificial intelligence at producing discoveries in voluminous datasets. AI is increasingly the pointer for follow-up studies that pay off.

Next post: How Common Are Giant Planets around Red Dwarfs?