Were the rocky worlds of the inner Solar System depleted in carbon as they formed, the so-called ‘carbon deficit problem’? There is evidence for a system-wide carbon gradient in that era, which makes for interesting interactions between our Sun’s habitable zone and the far reaches of the system, for as the planets gradually cooled, the carbon so necessary for life as we know it would have been available only far from the Sun.

How much of a factor were early comets in bringing carbon into the inner system? This question underlies new work by Charles Woodward and colleagues. Woodward (University of Minnesota Twin Cities / Minnesota Institute of Astrophysics) focuses on Comet Catalina, which was discovered in early 2016. He sees carbon in the context of life:

“Carbon is key to learning about the origins of life. We’re still not sure if Earth could have trapped enough carbon on its own during its formation, so carbon-rich comets could have been an important source delivering this essential element that led to life as we know it.” 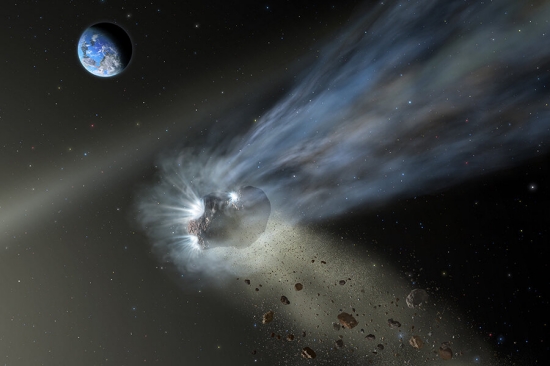 Image: Illustration of a comet from the Oort Cloud as it passes through the inner Solar System with dust and gas evaporating into its tail. SOFIA’s observations of Comet Catalina reveal that it is carbon-rich, suggesting that comets delivered carbon to the terrestrial planets like Earth and Mars as they formed in the early system. Credit: NASA/SOFIA/ Lynette Cook.

Let’s zoom in on this a little more closely. Volatile ices of water, carbon monoxide and carbon dioxide are found mixing with dust grains in the outer system, an indication that the young Solar System beyond the snowline was, in the authors’ words, “not entirely ‘primordial’ but was ‘polluted’ with the processed materials from the inner disk, the ‘hot nebular product.'” Or to slip the metaphor slightly, we can say that comets were salted with materials that were originally produced at higher temperatures. Comets can offer a window into this process.

The work is anything but straightforward, for although we’ve learned a lot through missions like Giotto, Rosetta/Philae and Deep Impact (including, of course, abundant telescope observations from Earth and a sample return mission called Stardust), the interplanetary dust particles we’ve been able to analyze from comets 81P/Wild 2 and 26P/Grigg-Skjellerup differ considerably. The paper explains:

The former contains material processed at high temperature (Zolensky et al. 2006), while the latter is very “primitive” (Busemann et al. 2009). For these reasons, it is necessary to determine as best as we can the properties of dust grains from a large sample of comets using remote techniques (Cochran et al. 2015). These include observations of both the thermal (spectrophotometric) and scattered light (spectrophotometric and polarimetric). The former technique provides our most direct link to the composition (mineral content) of the grains.

The research team drew on data from the Stratospheric Observatory for Infrared Astronomy (SOFIA), a Boeing 747 aircraft carrying a 2.7-meter reflecting telescope with an effective diameter of 2.5 meters. At altitude (SOFIA generally operates between 38,000 and 45,000 feet), the observatory is above 99 percent of Earth’s atmosphere, which can block infrared wavelengths. SOFIA data show Catalina as a carbon-rich object.

The paper points out that carbon dominates as well in other comets we’ve seen, both those in closer orbits (103P/Hartley 2) and Oort Cloud comets like C/2007 N3 and C/2001 HT50. It also turns out that dusty material from comet 67P/Churyumov–Gerasimenko was rich in carbon, although the authors note that comets can show changes in their silicate-to-carbon ratio, sometimes even during the course of a single night’s observations. The paper adds:

A dark refractory carbonaceous material darkens and reddens the surface of the nucleus of 67P/Churyumov–Gerasimenko. Comet C/2013 US10 (Catalina) is carbon rich. Analysis of comet C/2013 US10 (Catalina)’s grain composition and observed infrared spectral features compared to interplanetary dust particles, chondritic materials, and Stardust samples suggest that the dark carbonaceous material is well represented by the optical properties of amorphous carbon. We argue that this dark material is endemic to comets.

All this suggests that carbon delivered by comets is a part of the evolution of the early Solar System. Each carbon-rich comet we study has implications for how life may have been spurred by impacts, making the investigation of carbon-rich Oort Cloud comets a continuing priority for SOFIA, which can be deployed quickly when comets are found entering the inner system.

The paper is Woodward et al, “The Coma Dust of Comet C/2013 US10 (Catalina): A Window into Carbon in the Solar System,” The Planetary Science Journal (2021). Abstract / Full Text.