A Path Forward for Technosignature Searches

Héctor Socas-Navarro (Instituto de Astrofísica de Canarias) is lead author of a paper on technosignatures that commands attention. Drawing on work presented at the TechnoClimes 2020 virtual meeting, under the auspices of NASA at the Blue Marble Space Institute of Science in Seattle, the paper pulls together a number of concepts for technosignature detection. Blue Marble’s Jacob Haqq-Misra is a co-author, as is James Benford (Microwave Sciences), Jason Wright (Pennsylvania State) and Ravi Kopparapu (NASA GSFC), all major figures in the field, but the paper also draws on the collected thinking of the TechnoClimes workshop participants.

We’ve already looked at a number of technosignature possibilities in these pages, so let me look for commonalities as we begin, beyond simply listing possibilities, to point toward a research agenda, something that NASA clearly had in mind for the TechnoClimes meeting. The first thing to say is that technosignature work is nicely embedded within more traditional areas of astronomy, sharing a commensal space with observations being acquired for other reasons. Thus the search through archival data will always be a path for potential discovery.

The Socas-Navarro paper, however, homes in on new projects and mission concepts that could themselves provide useful data for other areas of astronomy and astrophysics. A broad question is what kind of civilization we would be likely to detect if technosignature research succeeds. Only technologies much superior to our own could be detected with our current tools. Recent work on a statistical evaluation of the lifespan of technological civilizations points to the same conclusion: First detection would almost certainly be of a high-order technology. Would it also be a signature of a civilization that still exists? As we’ll see in the next post, there are reasons for thinking this will not be the case. 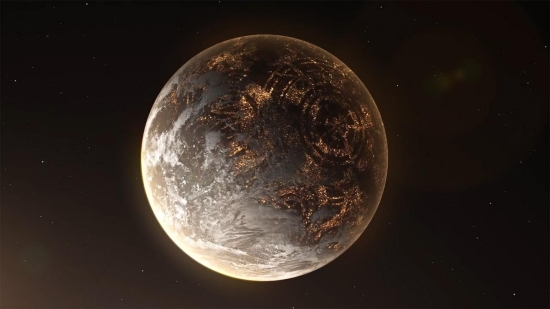 Image: Artistic recreation of a hypothetical exoplanet with artificial lights on the night side. Credit: Rafael Luis Méndez Peña/Sciworthy.com.

This is a useful paper for those looking for an overview of the technosignature space, and it also points to the viability of new searches on older datasets as well as data we can expect from already scheduled missions and new instrumentation on the ground. Thus exoplanet observations offer obvious opportunities for detecting unusual phenomena as a byproduct of their work. The workshop suggested taking advantage of this fact by modeling, with technosignatures in mind, for complex light curve analysis, photometric and spectroscopic searches for night-time illumination, and developing new algorithms for analyzing optimal communications pathways between exoplanets in a given volume of interstellar space:

A region of space with the right distribution of suitable worlds to become a communication hub may be a promising place to search. TS [technosignatures] might be more abundant there, just like Earth TS are more abundant wherever there is a high density of human population, which in turn tends to clutter in the form [of] network structures.

Other methods piggyback on existing exoplanet campaigns. Observing planetary atmospheres, for instance, is useful because it ties in to existing biosignature detection efforts. Future projects on missions observing in the mid-infrared like the Large Ultraviolet Optical Infrared Surveyor (LUVOIR) could explore this space. See Technosignatures: Looking to Planetary Atmospheres, for example, for Ravi Kopparapu’s work on nitrogen dioxide (NO2) as an industrial byproduct, a kind of search we have only begun to explore. Back to the paper:

A nice advantage of this method of detecting atmospheric technosignatures is that the same instruments and telescopes can be used to characterize atmospheres of exoplanets. Our view of habitability and technosignatures is based on our own Earth’s evolutionary history. There are innumerable examples in the history of science where new phenomena were discovered serendipitously. By having a dedicated mission to look for atmospheric technosignatures that also covers exoplanet science, we can increase our chances of detecting extraterrestrial technology on an unexpected exoplanet, or may discover a spectral signature that we usually do not associate with technology. The only way to know is to search.

Where else might we push with new observational and mission concepts? A 3-meter space telescope performing an all-sky survey with high point source sensitivity in the infrared could provide benefits to astrophysics as well as being sensitive to Dyson spheres at great distances. The paper argues for a dedicated effort to develop fast infrared detectors capable of nanosecond timing to enable a space mission searching the entire infrared sky. Such detectors would be sensitive to transients like pulsars and fast radio bursts as well as broadband pulses.

The paper also makes the case for a radio observatory on the far side of the Moon. Here we are all but completely free from contamination from radio interference by our own species, although even now the matter is complicated by satellites like China’s Queqiao, which has been at the Earth-Moon L2 Lagrange point for almost three years. Issues of radio protection of the far side will grow in importance as we try to protect this resource, where Earth radio waves are attenuated by 10 orders of magnitude or more. Again, we are dealing with a future facility that would also be of inestimable value for conventional astronomy and lunar exploration.

Close encounters with other stars (which occur as another star penetrates the Sun’s Oort Cloud every 105 years or so) highlight the possibility that extraterrestrial civilizations, having noted biosignatures from Earth, could have placed probes in our system. Few searches for such artifacts have been conducted, but as Jim Benford has discussed in these pages (see Looking for Lurkers: A New Way to do SETI) a host of objects could be easily examined for artifacts. Few have been studied in depth, but Benford has made the case that both the surface of the Moon and the Earth Trojans can now be studied at an unprecedented level of detail.

We already have monthly mapping of the Moon at high resolution via the Lunar Reconnaissance Orbiter (LRO) with a resolution of 100m/pixel (LRO can also work at a higher resolution mode of 0.5m/pixel, but this mode has not been widely used). Future exploration might include an orbiter working in ultra high-resolution at the ∼10cm per pixel level. The workshop also discussed high-resolution mapping of Mars and, perhaps, Mercury and larger asteroids coupled with machine learning techniques identifying anomalies.

Not surprisingly, given the high visibility (in public interest) of objects like ‘Oumuamua or 2I/Borisov, a ready to launch intercept mission also comes into consideration here to plan for the study of future interstellar arrivals. Other possibilities for pushing the technosignature envelope include an asteroid polarimetry mission studying either main belt asteroids or the Jupiter Trojans, gathering information that would be useful for our understanding of small objects with a potential for impact on the Earth. The Jupiter mission could probe for natural and possible artificial objects that might have wound up being ensnared over time in Jupiter’s gravitational well. The asteroid mission would produce a statistical description of small objects in solar orbit. The paper describes it this way:

A telescope similar to Kepler would be sensitive to objects of 10 m up to a distance of 0.02 AU (assuming a high albedo of 0.8) or 0.01 AU for typical asteroid albedos. Extrapolating the current knowledge of asteroid size distribution, there should be some 250,000 asteroids of 10 m in the radius of 0.02 AU accessible to such [a] telescope in the asteroid belt. The mission could be designed with an elliptical orbit having the perihelion near the Earth’s orbit and the aphelion in the asteroid belt. Under these conditions it would regularly dive into a different region of the belt, probing a different space in every orbit.

Such are some of the ways we can extend the search for technosignatures while supporting existing astronomical and astrophysical work. The paper goes into new ground in introducing a framework for future work for the different types of technosignatures, defining what it calls the ‘ichnoscale’ and analyzing it in relation to the number of targets and the persistence of a possible signal. The ichnoscale parameter is “the relative size scale of a given TS [technosignaure] in units of the same TS produced by current Earth technology.“

We’re only beginning to map out a path forward for technosignature investigation, but the authors believe that given advances in exoplanet research, astrobiology and astrophysics, we are at the right place to inject new energy into the attempt. Thus what the community is trying to do is to learn the best avenues for proceeding while developing a framework to advance the effort by quantifying targets and potential signals. Along the way, we may well discover new astrophysical phenomena as a byproduct.

I’m particularly interested in the thorny question of how long technological civilizations can be expected to live, and am looking into a new paper from Amedeo Balbi and Milan Ćirković on the matter. I’ll be exploring some thoughts from this paper in the next entry.