‘Oumuamua: A Shard of Nitrogen Ice?

I’m only just getting to Steven Desch and Alan Jackson’s two papers on ‘Oumuamua, though in a just world (where I could clone myself and work on multiple stories simultaneously) I would have written them up sooner. Following Avi Loeb’s book on ‘Oumuamua, the interstellar object has been in the news more than ever, and the challenge it throws out by its odd behavior has these two astrophysicists, both at Arizona State, homing in on a possible solution.

No extraterrestrial technologies in this view, but rather an unusual object made of nitrogen ice, common in the outer Solar System and likely to be similarly distributed in other systems. Think of it as a shard of a planet like Pluto, where nitrogen ice is ubiquitous. Desch and Jackson calculated the object’s albedo, or reflectivity, with the idea in mind, realizing that the ice would be more reflective than astronomers had assumed ‘Oumuamua was, and thus it could be smaller. As the authors note: “Its brightness would be consistent with an albedo of 0.64, which is exactly consistent with the albedo of the surface of Pluto, which is > 98% N2 ice.”

That’s a useful finding because a nitrogen ice object would behave like ‘Oumuamua was observed to do. Recall the salient problem this interloper presented as it left the system. It moved away from the Sun at a slightly larger velocity than an average comet should have. Desch and Jackson discovered that if it were made of nitrogen ice, and thus smaller (and more reflective than thought), the so-called ‘rocket effect’ could be accounted for. A tiny object is affected by a small amount of escaping gas to a greater extent than a larger, more massive one.

The effect can be calculated by examining how different kinds of ices sublimate, moving from a solid to a gas with no intervening liquid state. As to how an object constituted of nitrogen ice might have gone interstellar, the astronomers worked out the rate that breakaway nitrogen ice pieces would have been produced through collisions in the outer system of an exoplanet. Says Jackson:

“It was likely knocked off the surface by an impact about half a billion years ago and thrown out of its parent system. Being made of frozen nitrogen also explains the unusual shape of ‘Oumuamua. As the outer layers of nitrogen ice evaporated, the shape of the body would have become progressively more flattened, just like a bar of soap does as the outer layers get rubbed off through use.”

That question of ‘Oumuamua’s shape continues to intrigue me, though, as I ponder my bar of Irish Spring. We’ve never observed anything of this shape in the Solar System. And exactly what would have happened at perihelion? I turned to the first of the two papers for more:

Even so, surely nitrogen ice would have been a huge factor in its behavior:

The volatility of N2 did, however, lead to significant mass loss – we calculate that by the time ‘Oumuamua was observed, a month after perihelion, it retained only around 8% of the mass it had on entering the solar system. This loss of mass is key to explaining the extreme shape of ‘Oumuamua: isotropic irradiation and removal of ice by sublimation increases the axis ratios, a process also identified by Seligman & Laughlin (2020). Between entering the Solar system and the light curve observations the loss of mass from ‘Oumuamua increased its axis ratios from an unremarkable 2:1 to the extreme observed value of around 6:1.

In other words, we are dealing with a ‘flattening’ that occurred in our own system and not at place of origin. I suspect this flattening process is going to receive a thorough vetting in the community, key as it is to explaining a salient oddity about ‘Oumuamua.

And so we wind up with a theory that presents ‘Oumuamua as shown below, an unusual aspect ratio to be sure (and yes, reminiscent of what could be a lightsail), but Desch and Jackson think their theory of nitrogen ice matches every aspect of ‘Oumuamua’s behavior without the need for invoking alien technology. Desch comments:

“…it’s important in science not to jump to conclusions. It took two or three years to figure out a natural explanation — a chunk of nitrogen ice — that matches everything we know about ‘Oumuamua. That’s not that long in science, and far too soon to say we had exhausted all natural explanations.” 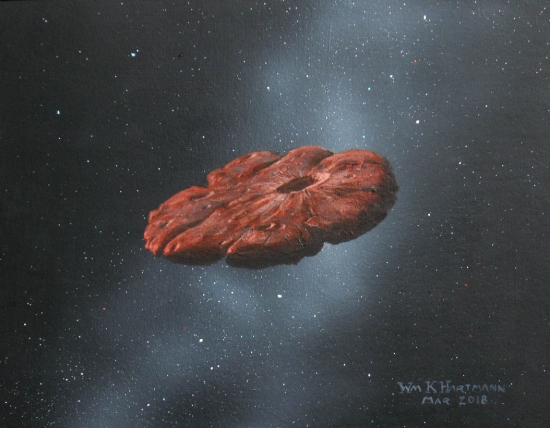 Image: This painting by William K. Hartmann, who is a senior scientist emeritus at the Planetary Science Institute in Tucson, Arizona, is based on a commission from Michael Belton and shows a concept of the ‘Oumuamua object as a pancake-shaped disk. Credit: William Hartmann.

Thus ‘Oumuamua, in the eyes of Desch and Jackson, might be considered a chunk of an exo-Pluto, which in itself opens the topic of studying interstellar objects for information about their parent systems. We’ve never observed an exo-Pluto before, so ‘Oumuamua may probe the surface composition of worlds like this.

Moreover, if our first identified interstellar interloper is made of nitrogen ice, then the existence of exo-Plutos must be common, although we’ll have to decide exactly how we want to define the term (and I suppose we can now invoke the ruckus about Pluto’s planetary status by asking whether exo-Plutos are actually to be referred to as ‘exo-dwarf planets’).

As the Vera Rubin Observatory/Large Synoptic Survey Telescope in Chile comes online, regular surveys of the southern sky will doubtless up the number of interstellar objects we can identify, helping us home in further on their composition and likely origin. 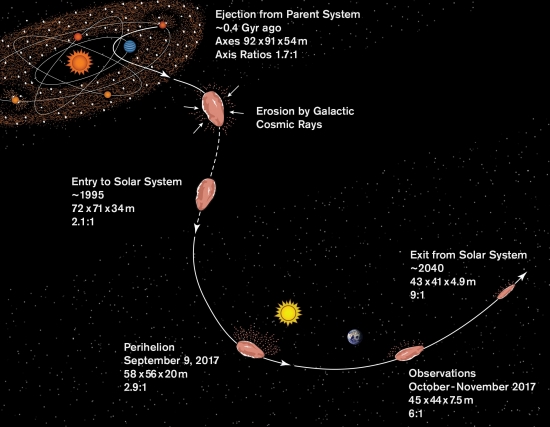 Image: Illustration of a plausible history for ‘Oumuamua: Origin in its parent system around 0.4 billion years ago; erosion by cosmic rays during its journey to the solar system; and passage through the solar system, including its closest approach to the Sun on Sept. 9, 2017, and its discovery on October 2017. At each point along its history, this illustration shows the predicted size of ‘Oumuamua, and the ratio between its longest and shortest dimensions. Credit: S. Selkirk/ASU.

Next post: Thoughts on Acceleration, Nitrogen Ice & the Local Standard of Rest