Thoughts on Acceleration, Nitrogen Ice & the Local Standard of Rest

I’ve used the discovery of ‘Oumuamua as a learning opportunity. I knew nothing about the Local Standard of Rest (LSR) when the analysis of the object began, but soon learned that it measured the mean motion of interstellar materials in the Milky Way near the Sun. The Sun moves clockwise as viewed from galactic north, with an orbital speed that has been measured, through interferometric techniques, at 255.2 kilometers per second, give or take 5.1 km/s. Invoking the LSR in this connection calls for a quote from Eric Mamajek (JPL/Caltech) in his paper “Kinematics of the Interstellar Vagabond 1I/’Oumuamua (A/2017 U1)” (abstract here):

‘Oumuamua’s velocity is within 5 km/s of the median Galactic velocity of the stars in the solar neighborhood (<25 pc), and within 2 km/s of the mean velocity of the local M dwarfs. Its velocity appears to be statistically “too” typical for a body whose velocity was drawn from the Galactic velocity distribution of the local stars (i.e. less than 1 in 500 field stars in the solar neighborhood would have a velocity so close to the median UVW velocity). In the Local Standard of Rest frame (circular Galactic motion), ‘Oumuamua is remarkable for showing both negligible radial (U) and vertical (W) motion, while having a slightly sub-Keplerian circular velocity (V; by ~11 km/s). These calculations strengthen the interpretation that A/2017 U1 has a distant extrasolar origin, but not among the very nearest stars. Any formation mechanism for this interstellar asteroid should account for the coincidence of ‘Oumuamua’s velocity being so close to the LSR.

Below is what ‘Oumuamua really looks like. As opposed to the artists’ conceptions we’ve all seen, each of which makes its own set of assumptions based on current studies, this is what we have on this object visually. As you can see, it isn’t much to work with. 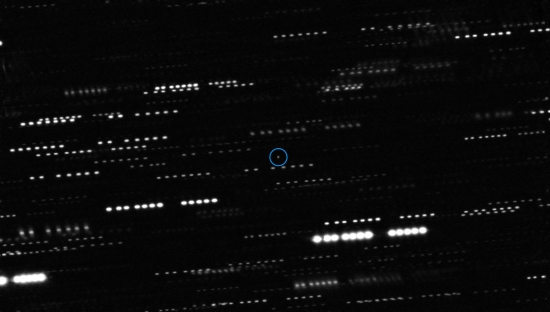 Image: This very deep combined image shows the interstellar object ‘Oumuamua at the center of the image. It is surrounded by the trails of faint stars that are smeared as the telescopes tracked the moving object. Credit: ESO/K. Meech et al.

Harvard’s Avi Loeb has likewise noted that an interstellar object should have inherited the motion of its birth star, and thus would not have been likely to be found at the Local Standard of Rest. Now, in a new piece for Scientific American called Was the Interstellar Object ‘Oumuamua a Nitrogen Iceberg?, Loeb references the paper by Alan Jackson and Steven Desch that argues for ‘Oumuamua being a nitrogen ‘shard’ from an outer system object, the equivalent of Pluto in our own Solar System. We looked at this paper on Friday.

Loeb points out that a nitrogen iceberg would be an oddity given that we’ve never seen one of these among objects found in our own Oort Cloud, that agglomeration of perhaps trillions of comets that extends halfway to the Alpha Centauri triple system. Yet if the first interstellar object detected turns out to be made of nitrogen, the implication is that objects like this are common, and perhaps they are in other stellar systems. Fortunately, this is something we’ll be able to study in the near future as observatories like the Rubin LSST become available. The catalog of interstellar objects should grow quickly and the likelihood of nitrogen ice can be examined.

It always helps to know what to look for, but then, ‘Oumuamua has surprised us on several fronts. Loeb also points out that about a tenth of the object’s mass would need to have evaporated to explain its deviation from the expected path as it left the Solar System (Desch and Jackson cite a much higher fraction of the object’s mass). This point continues to draw attention because post-perihelion evaporation should have caused jitter on the departing object, a change to the rate at which it was tumbling. As far as I can see, the issue of ‘Oumuamua’s behavior is still problematic.

Meanwhile, the Oort itself retains its fascination. A cloud of cometary material reaching out to what may well be a similar Oort Cloud at Alpha Centauri (its existence is not proven, of course) would provide a far future civilization a way to move slowly outward, exploiting resources along the way in a multi-generational wave that took advantage of the ubiquity of such objects. For today’s purposes, you would think we might be able to exploit exo-Oort Clouds, if they are there, to work backward along the route of ‘Oumuamua to find the star from which it came, but Loeb points out that there would simply be too many Oort analogs along the line of sight to allow any firm identification.

So we move forward in the ‘Oumuamua discussion, with nitrogen ice now in the mix, with its own caveats, as a potential explanation. As we work out the implications, Loeb also notes that the population of interstellar objects may exceed anything we’ve previously estimated:

The opportunity presented by such a wealth of interstellar materials ranging from dust particles to free-floating planets is immense, and if there is a growth engine embedded within the astronomical community for the next decade or so, it’s surely here, as we begin identifying more and more objects born around stars other than our own. Who knew even a few years ago that we might be able to take advantage of so widespread a phenomenon to study materials from other stellar systems without the need to put our own probes around their stars?