The beauty of comet 2I/Borisov, the second interstellar object discovered in our Solar System, is that it looks and acts more or less like, well, an interstellar comet, without the puzzling characteristics of its predecessor, the still controversial ‘Oumuamua. 2I/Borisov’s cometary nature is clear in the latest observations from the European Southern Observatory’s Very Large Telescope, data from which also tell us that this is one of the most undisturbed relics of a circumstellar disk ever found. Scientists believe it never passed close to any star before its 2019 passage by the Sun.

We don’t know around which star it formed, but Stefano Bagnulo (Armagh Observatory and Planetarium, Northern Ireland), lead author of one of two new papers on the object, says that 2I/Borisov “could represent the first truly pristine comet ever observed.” Bagnulo’s team used the FORS2 instrument on the VLT (FOcal Reducer and low dispersion Spectrograph), an instrument that can take spectra as well as measuring polarization.

That later capability, called polarimetry, helps astronomers understand the chemistry of comets by studying how sunlight is polarized by a comet’s dust. The technique has been used on small bodies in the Solar System including comets, making for interesting comparisons. For 2I/Borisov’s polarimetric properties differ from Solar System comets with the exception of one, comet Hale-Bopp, which was likewise one of the most pristine comets observed to that time. 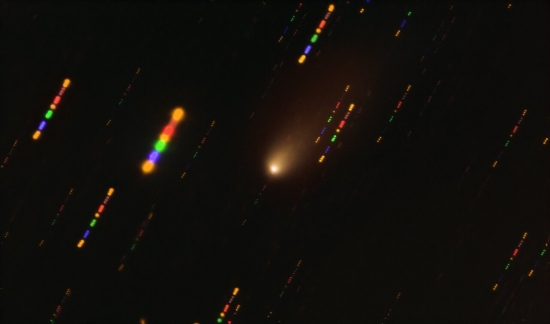 Image: Taken with the FORS2 instrument on ESO’s Very Large Telescope in late 2019, when comet 2I/Borisov passed near the Sun. Here the background stars appear as streaks of light as the telescope followed the comet’s trajectory. The colours in this composite image are the result of combining observations in different wavelength bands. Credit: ESO/O. Hainaut.

You may recall Hale-Bopp from the late 1990s, when it was a naked eye object (I remember a total stranger offering up a view in his small telescope on a nearby parking lot one night). A comet like this would be little affected by the solar wind and other radiation, thus having a composition similar to the original cloud of gas and dust that produced it. But Hale-Bopp was thought to have made one pass by the Sun before its recent visitation, while 2I/Borisov shows every sign of being a complete newcomer to the inner regions of a star.

Two interesting points from the paper:

…at the time of our observations, comet 2I/Borisov was polarimetrically homogeneous, showing no sign of active areas contributing to the coma formation. Prior to its recent perihelion passage, comet Hale-Bopp probably was near the Sun at least once, and possibly only once, ~2250 BC; at the time of that first approach, the original material was removed from the surface and active areas were open, hence Hale-Bopp could manifest activity during its recent perihelion passage. Comet 2I/Borisov instead, most likely never passed close to the Sun or any other star, and may represent the first truly pristine comet that has ever been observed.

That’s useful information in the context of what follows, as we learn in this paper that 2I/Borisov’s composition is consistent with objects that emerged close to home:

The similarity between the polarimetric properties of the two comets must depend upon the microscopic structure and composition of the aggregates, and not on their macroscopic characteristics, as the two comets are quite different in size: the analysis of the photometric profile of the inner coma suggests that comet Hale-Bopp belongs to the class of giant comets, with the diameter of the nucleus being estimated between 20 and 35 km, while 2I/Borisov’s nucleus size is ≤ 0.4 km. The close similarity between the polarimetric behaviour of the comet 2I/Borisov and Hale-Bopp suggests that, whatever astrophysical environment in which comet 2I/Borisov originated in, such environment had properties which led to the formation of a body bearing significant analogies with those accreted in the outer regions of our Solar System, a remarkable result on its own. 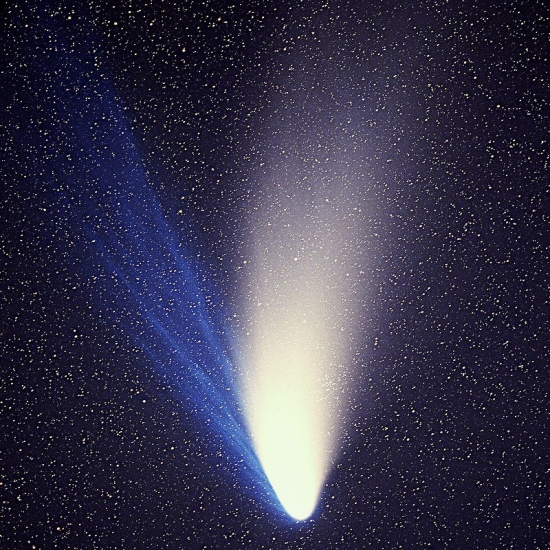 In a second paper on the interstellar comet, ESO astronomer Bin Yang used data from the Atacama Large Millimeter/submillimeter Array (ALMA) to study 2I/Borisov’s dust grains. Here the key finding is that the coma of the comet surrounding the nucleus contains dust grains of one millimeter or larger. The relative amounts of carbon dioxide and water also changed as the comet neared perihelion, an indication that mixing of materials occurred where it formed. We can begin to deduce interesting things about the home system of this interstellar comet:

Our ALMA and VLT observations indicate that 2I/Borisov’s home planetary system, much like our own Solar system, had experienced efficient radial mixing from the innermost parts of its protoplanetary disk to beyond the frost line of CO. Among a number of probable mechanisms that have been proposed for the origin of ISOs [interstellar objects], gravitational interactions between planetesimals in the protoplanetary disk and growing giant planets is favored, as it can explain both the ejection of ISOs from their home systems as well as account for the strong radial transport of materials in the disk. While the most common planets in other exoplanetary systems seem to be super-Earths and mini-Neptunes, our study suggests the presence of giant planets in the home system of 2I/Borisov.

Next post: Uranus: Detection of X-rays and their Implications