Proxima Centauri b: Artificial Illumination as a Technosignature

Our recent look at the possibility of technosignatures at Alpha Centauri is now supplemented with a new study on the detectability of artificial lights on Proxima Centauri b. The planet is in the habitable zone, roughly similar in mass to the Earth, and of course, it orbits the nearest star, making it a world we can hope to learn a great deal more about as new instruments come online. The James Webb Space Telescope is certainly one of these, but the new work also points to LUVOIR (Large UV/Optical/IR Surveyor), a multi-wavelength space-based observatory with possible launch in 2035.

Authors Elisa Tabor (Stanford University) and Avi Loeb (Harvard) point out that a (presumably) tidally locked planet with a permanent nightside would need artificial lighting to support a technological culture. As we saw in Brian Lacki’s presentation at Breakthrough Discuss (see Alpha Centauri and the Search for Technosignatures), coincident epochs for civilizations developing around neighboring stars are highly unlikely, making this the longest of longshots. On the other hand, a civilization arising elsewhere could be detectable through its artifacts on worlds it has chosen to study.

We learn by asking questions and looking at data. In this case, asking how we would detect artificial light on Proxima b involves factoring in the planet’s radius, which is on the order of 1.3 Earth radii (1.3 R⊕) as well as that of Proxima Centauri itself, which is 0.14 that of the Sun (0.14 R⊙). We also know the planet is in an 11 day orbit at 0.05 AU. Other factors influencing its lightcurve would be its albedo and orbital inclination. Tabor and Loeb use recent work on Proxima Centauri c’s inclination (citation below) to ballpark an orbital inclination for the inner world. 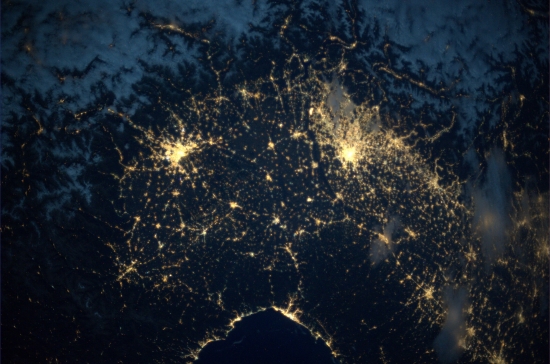 Image: Northern Italy at night. City lights are an obvious technosignature, but can we detect them at interstellar distances? Credit: NASA/ESA.

The question then becomes whether soon to be flown technology like the James Webb Space Telescope could detect artificial lights if they were present at Proxima b. The authors detail in this paper their calculation of the lightcurves that would be involved, using two scenarios: Artificial lighting with the same spectrum found in LEDs on Earth, and a narrower spectrum leading to the “same proportion of light as the total artificial illumination on Earth.” The calculations draw on open source software source code called Exoplanet Analytic Reflected Lightcurve (EARL), and likewise deploy the JWST Exposure Time Calculator (ETC) to estimate the feasibility of detection.

What Loeb and Tabor find is that JWST could detect LED lighting “making up 5% of stellar power” with 85 percent confidence — in other words, 5% of the power the planet would receive at its orbital distance from Proxima Centauri. That would mean our space telescope could find a level of illumination from LEDs that is 500 times more powerful than found on Earth.

All of this demands maximum performance from JWST’s Near InfraRed Spectrograph (NIRSpec). Much depends upon what methods a civilization at Proxima b might use. From the paper:

Proxima b is tidally locked if its orbit has an eccentricity below 0.06, where for reference, the eccentricity of the Earth’s orbit is 0.017 (Ribas et al. 2016). If Proxima b has a permanent day and nightside, the civilization might illuminate the nightside using mirrors launched into orbit or placed at strategic points (Korpela et al. 2015). In that case, the lights shining onto the permanent nightside should be extremely powerful, and thus more likely to be detected with JWST.

That last comment calls to mind Karl Schroeder’s orbital mirrors lighting up brown dwarf planets in his novel Permanence (2002). A snip from the book, referring to a brown dwarf planet named Treya as seen by the protagonist, Rue:

A pinprick of light appeared on the limb of Treya and quickly grew into a brilliant white star. This seemed to move out and away from Treya, which was an illusion caused by Rue’s own motion. Treya’s artificial sun did not move, but stayed at the Lagrange point, bathing an area of the planet eighty kilometers in diameter with daylight. The sun was a sphere of tungsten a kilometer across. It glowed with incandescence from concentrated infrared light, harvested from Erythrion [the brown dwarf] by hundreds of orbiting mirrors. If it were turned into laser power, this energy could reshape Treya’s continents— or launch interstellar cargoes.

A flat line of light appeared on Treya’s horizon. It quickly grew into a disk almost too bright to look at. When Rue squinted at it she could make out white clouds, blue lakes, and the mottled ochre and green of grassland and forests. The light was bright enough to wash away the aurora and even make the stars vanish. Down there, she knew, the skies would be blue.

Back to Proxima b: The LUVOIR instrument should be able to confirm the presence or lack of artificial illumination with greater precision, serving as a follow-up to JWST observations with significantly higher performance. Loeb has previously worked with Manasvi Lingam to show the likelihood of detecting a spectral edge in the reflectance of photovoltaic cells on the planet’s dayside, so in terms of technosignatures, we’re learning what we will be able to identify based on a growing set of scenarios for any civilization there.