The galaxy UGC 10738 resonates with the galaxy described yesterday — BRI 1335–0417 — in that it raises questions about how spiral galaxies form. In fact, the team working on UGC 10738 thinks it goes a long way toward answering them. That’s because what we see here is a cross-sectional view of a galaxy much like the Milky Way, one that has both ‘thick’ and ‘thin’ disks like ours. The implication is that these structures are not the result of collisions with smaller galaxies but typical formation patterns for all spirals.

Nicholas Scott and Jesse van de Sande (ASTRO 3D/University of Sydney) led the study, which used data from the European Southern Observatory’s Very Large Telescope in Chile. As you can see from the image below, the galaxy, some 320 million light years away, presents itself to us edge on, offering a cross-section of its structure. Key to the work was the team’s assessment of stellar metallicity, as van de Sande explains:

“Using an instrument called the multi-unit spectroscopic explorer, or MUSE, we were able to assess the metal ratios of the stars in its thick and thin discs. They were pretty much the same as those in the Milky Way – ancient stars in the thick disc, younger stars in the thin one. We’re looking at some other galaxies to make sure, but that’s pretty strong evidence that the two galaxies evolved in the same way.”

Published in Astrophysical Journal Letters, the study argues that the thin and thick disks found in the Milky Way — and the similar structures found in UGC 10738 — indicate that rather than being the result of chance collisions with other galaxies, the different disks reveal a standard path of galaxy formation and evolution. They would be unlikely to be repeated elsewhere if the result of a rare and violent merger.

The ‘thick’ and ‘thin’ disks are interesting features, with the former primarily made up of ancient stars that show a low ratio of iron to hydrogen and helium. Tracing the metallicity of the thin disk stars reveals that they are younger and contain more metals. Our Sun is a thin disk star, and as the authors note, it is made up of about 1.5% elements heavier than helium (the definition of ‘metals’ in astronomical parlance). Stars of the thick disk show three to ten times less metal content, a striking difference.

Finding the same differences in the two disk structures in other spiral galaxies points to the likelihood that the Milky Way formed in a way common to such galaxies. Says Scott:

“It was thought that the Milky Way’s thin and thick discs formed after a rare violent merger, and so probably wouldn’t be found in other spiral galaxies. Our research shows that’s probably wrong, and it evolved ‘naturally’ without catastrophic interventions. This means Milky Way-type galaxies are probably very common. It also means we can use existing very detailed observations of the Milky Way as tools to better analyse much more distant galaxies which, for obvious reasons, we can’t see as well.”

So we have what the authors describe as a ‘tension’ between two formation scenarios, one stochastic, one common to spiral galaxies. But let’s get into the weeds a little. The paper goes on to widen the sample into other subtypes of galaxy:

This tension is further enhanced once early-type disk galaxies with [α/Fe]-enhanced thick disks are included in the population of present day galaxies with similar formation histories (Pinna et al. 2019b; Poci et al. 2019, 2021). That early-type disk galaxies are found to contain similar abundance patterns as found in the Milky Way (i.e. increased mean [α/Fe] off the plane of the disk) is unsurprising. Such galaxies represent one plausible end point for the Milky Way’s evolutionary history, suggesting a shared and generic evolutionary pathway for disk galaxies.

All of this harks back to Edwin Hubble’s classification of galaxies (the Hubble Sequence). The phrase “early-type” galaxies” refers to elliptical and lenticular galaxies, as opposed to spiral and irregular galaxies, without implying an evolutionary path from one type to another. So the authors are speculating when they talk about an ‘evolutionary end point’ for the Milky Way, but it’s an interesting speculation:

The Milky Way is often identified as a so-called ‘green valley’ galaxy (Mutch et al. 2011), a galaxy already undergoing a transition to the red sequence. When fully quenched (and assuming no dramatic structural changes in the mean time) the Milky Way will likely resemble a lenticular galaxy similar to FCC 170 (Pinna et al. 2019a).

The ‘green valley’ refers to galaxies where star formation has been slowed, either because they have exhausted their reservoirs of gas, or (in younger galaxies) have undergone mergers with other galaxies. Both the Milky Way and Andromeda are assumed to be green valley galaxies of the first kind.

FCC 170 (NGC 1381) is a lenticular galaxy found in the constellation Fornax, about 60 million light years from Earth, a member of the Fornax Cluster (hence the FCC designation, standing for Fornax Cluster Catalogue). As a lenticular, it is in a middle stage between a spiral and an elliptical galaxy, with a large scale disk but lacking spiral arms on the scale of a true spiral galaxy. Is this the Milky Way’s future?

And then, of course, there is the merger with Andromeda to look forward to. How much we have to learn about how galaxies change over time! 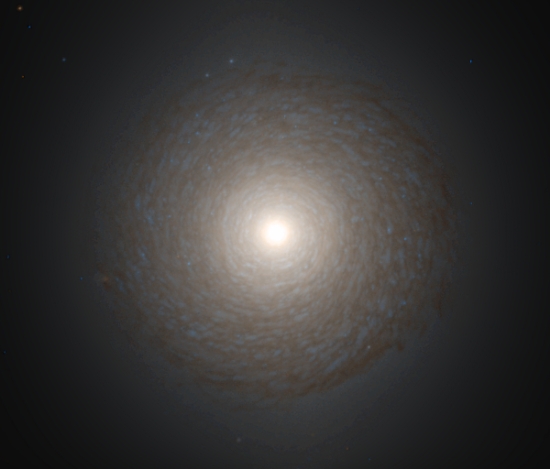 Image: This is NGC 1387, a lenticular galaxy likewise in the Fornax Cluster, and better angled to show the lack of spiral structure in such galaxies than FCC 170. Credit: Fabian RRRR. Based on observations made with the NASA/ESA Hubble Space Telescope, and obtained from the Hubble Legacy Archive, which is a collaboration between the Space Telescope Science Institute (STScI/NASA), the Space Telescope European Coordinating Facility (ST-ECF/ESA) and the Canadian Astronomy Data Centre (CADC/NRC/CSA). CC BY-SA 3.0.

Previous post: The Most Ancient Spiral Galaxy Yet Found