What’s going on on the floor of Europa’s ocean? It’s hard to imagine a place like this, crushed under the pressure of 100 kilometers or more of water, utterly dark, although I have to say that James Cambias does wonders with an ice moon ocean in his novel A Darkling Sea (Tor, 2014). Science fiction aside, Europa Clipper is in queue for a 2024 launch, and we can anticipate a flurry of new studies that feed into plans for the mission’s scientific investigations. The latest of these puts Clipper on volcano watch.

The work deploys computer modeling to show that volcanic activity seems to have occurred recently on Europa’s seafloor. The concept is that there may be enough internal heat to cause melting — at least in spots — of the rocky interior, which would produce the needed results.

How this heating affects the moon is deduced from the 3D modeling of heat production and transfer in the paper, which was recently published in Geophysical Research Letters. The lead author is Marie Běhounková (Charles University, Czech Republic), who describes the astrobiological import of the team’s results:

“Our findings provide additional evidence that Europa’s subsurface ocean may be an environment suitable for the emergence of life. Europa is one of the rare planetary bodies that might have maintained volcanic activity over billions of years, and possibly the only one beyond Earth that has large water reservoirs and a long-lived source of energy.” 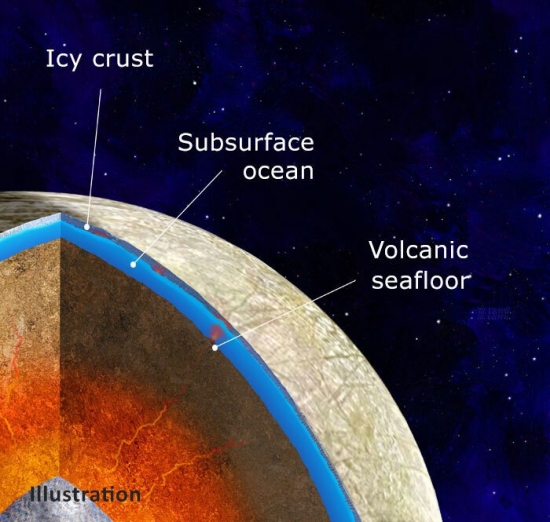 Image: Scientists’ findings suggest that the interior of Jupiter’s moon Europa may consist of an iron core, surrounded by a rocky mantle in direct contact with an ocean under the icy crust. New research models how internal heat may fuel volcanoes on the seafloor. Credit: NASA/JPL-Caltech/Michael Carroll.

With massive Jupiter close at hand, it’s no surprise that gravitational interactions should account for heat production in Europa’s mantle, for the rocky interior flexes in the course of the moon’s orbit. The paper drills down into how this flexion operates, where the resulting heat dissipates, and how it results in melting in the mantle.

In Europa Clipper terms, it’s useful to learn that volcanic activity is most likely to occur near the poles, for this is where the most heat is produced from these effects. On top of this, we learn that the volcanic activity likely to be produced here is long-lived, giving life the opportunity to evolve. As an analogue, we can imagine hydrothermal systems like those at the bottom of Earth’s oceans, where seawater and magma interact.

In the absence of sunlight, the resultant chemical energy supports life on the seafloor and could conceivably do so on Europa. Europa Clipper will measure the moon’s gravity and magnetic field, looking for anomalies toward the poles that could confirm the presence of volcanic activity. Long-time Europa specialist and Europa Clipper project scientist Robert Pappalardo (JPL) sees all this as fodder for continuing investigation:

“The prospect for a hot, rocky interior and volcanoes on Europa’s seafloor increases the chance that Europa’s ocean could be a habitable environment. We may be able to test this with Europa Clipper’s planned gravity and compositional measurements, which is an exciting prospect.”

Europa Clipper should reach the Jupiter system in 2030, orbiting the giant planet and performing numerous close flybys of Europa as it surveys the surface, samples any gases that may have been emitted by the exchange of material from below the ocean, and possibly takes advantage of plumes of water vapor. If water is indeed welling up on occasion from below, we may be able to learn a good deal about the interior ocean without having the need to drill down through kilometers of ice.

Next post: Are Planets with Continuous Surface Habitability Rare?