If we assume that the Oort Cloud, that enveloping shroud of comets that surrounds our Solar System and extends to 100,000 AU or beyond, is a common feature of stellar systems, then it’s conceivable that objects are interchanged between the Sun and Alpha Centauri where the two clouds approach each other. That makes for the ‘slow boat to Centauri’ concept I’ve written about before, where travel between the stars essentially mines resources along the way in migrations lasting thousands of years. The resulting society would not be planet-oriented.

When the Dutch astronomer Jan Hendrik Oort deduced the cloud’s existence, he theorized that there was an inner, disk-shaped component as well as an outer, spherical cloud, as shown in the image below. The outer cloud is only loosely bound to the Sun, making the interchange of cometary materials between stars a likely event over the aeons, while gravitational nudges from passing stars can dislodge comets in the other direction as well, causing them to move toward the inner system. Most long-period comets probably come from the Oort Cloud. 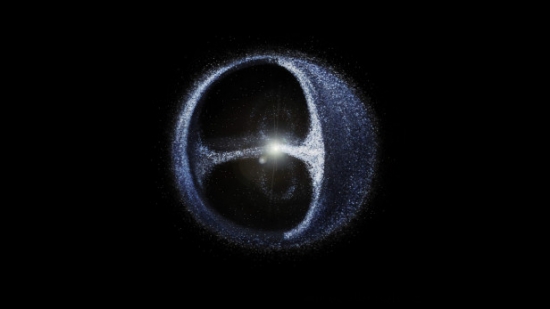 I should also mention that we can find the Oort Cloud concept, though obviously not that name, discussed in the work of the Estonian astronomer Ernst Öpik in 1932, which is why you sometimes see the cometary cloud referred to as the Öpik–Oort Cloud. Compared to it, the Kuiper Belt is practically in our backyard at 30 to 50 AU. We’ve pushed probes into the Kuiper Belt, but it’s a matter of pure speculation when we’ll have the technologies to reach the Oort, though of course any future interstellar probes will need to pass through this region. Not to worry, though; comets out here are presumed to be tens of millions of kilometers apart.

At Leiden University in the Netherlands, Simon Portegies Zwart has run simulations mapping the growth of the Oort Cloud that are to be presented in a forthcoming paper in Astronomy & Astrophysics. The work confirms the idea that the Oort is a remnant of the protoplanetary disk from which the Solar System grew some 4.6 billion years ago. While much of it comes from comets ejected from the young Solar System by the gas- and ice-giant planets, the research team suggests that a second population of comets comes from other stars.

Bear in mind that at the Sun’s birth, numerous other stars would have been nearby, from which objects in their circumstellar disks could have been exchanged, along with free-floating debris in the parent star cluster and other interstellar objects. Indeed, a high percentage of the Oort Cloud’s material could have come from such sources, as the paper notes: “About half the inner Oort cloud, between 100 and 104 au, and a quarter of the material in the outer Oort cloud ≳ 104 au could be non-native to the Solar system but was captured from free-floating debris in the cluster or from the circumstellar disk of other stars in the birth cluster.”

Let’s look further into the paper on how mass moves around as the Cloud is formed:

According to Cai et al. (2019) 20–80% (with an average of 50%) of the circumstellar material survives the first 100 Myr of its evolution in the parent cluster. The majority of this mass is lost through encounters with other stars. The amount of material lost from the solar system in the simulation presented here falls in this range, meaning that the circumstellar disk has lost about half its mass due to interactions with other stars in the parent cluster, or about 100 M⊕ to 3000 M⊕. Each of the other processes results in a mass loss of roughly 20%. A small fraction of the ejected asteroids acquire bound orbits in the Oort cloud.

The transport of material from one star to another is seen in the simulations to be “rather symmetric.” While the Solar System is what the authors call “a copious polluter of interstellar space,” so too is it receiving material from other systems. The authors argue that stars in the Sun’s birth cluster would have experienced numerous encounters with other stars, and that the Solar System shows evidence of both single strong encounters and a series of relatively weak encounters, based on the orbital parameters of Sedna and the complexity of the orbits found in the scattered Kuiper Belt beyond 45 AU.

These simulations demonstrate that the Oort Cloud evolved using materials from numerous sources. Here is how lead author Portegies Zwart puts the matter:

“With our new calculations, we show that the Oort cloud arose from a kind of cosmic conspiracy, in which nearby stars, planets and the Milky Way all play their part. Each of the individual processes alone would not be able to explain the Oort cloud. You really need the interplay and the right choreography of all the processes together. And that, by the way, can be explained quite naturally from the Sun’s birth environment. So although the Oort cloud is complicatedly formed, it is probably not unique.”

The paper is Zwart et al., “Oort cloud Ecology II: The chronology of the formation of the Oort cloud,” accepted at Astronomy & Astrophysics (preprint).