Hard to believe that Fast Radio Bursts (FRBs) were only discovered in 2007, as it seems we’ve been puzzled by them for a lot longer. Thus far about 140 FRBs have been detected, but now we have news that the Canadian Hydrogen Intensity Mapping Experiment (CHIME) has pulled in a total of 535 new fast radio bursts in its first year of operation between 2018 and 2019. The catalog growing from this work was presented this week at the annual meeting of the American Astronomical Society.

“Before CHIME, there were less than 100 total discovered FRBs; now, after one year of observation, we’ve discovered hundreds more,” says CHIME member Kaitlyn Shin, a graduate student in MIT’s Department of Physics. “With all these sources, we can really start getting a picture of what FRBs look like as a whole, what astrophysics might be driving these events, and how they can be used to study the universe going forward.” 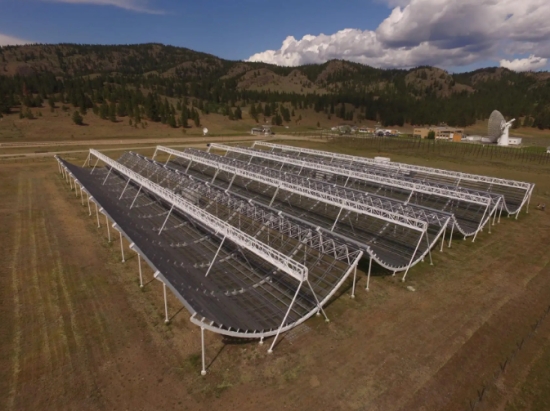 CHIME involves four cylindrical radio antennas that MIT describes as “roughly the size and shape of snowboarding half-pipes” located in British Columbia, and operated by the National Research Council of Canada. A correlator instrument — a digital signaling processor — digs through data from the stationary array at a rate of 7 terabits per second, allowing it to detect FRBs at a thousand times the pace of conventional radio telescopes.

We learn, for one thing, that FRBs are common, and frequent. Kiyoshi Masui (MIT) presented the catalog to conference goers on Wednesday the 9th:

“That’s kind of the beautiful thing about this field — FRBs are really hard to see, but they’re not uncommon. If your eyes could see radio flashes the way you can see camera flashes, you would see them all the time if you just looked up.”

It becomes clear from these data that the FRBs detected in the first year were evenly distributed in space, appearing in all parts of the sky. Their rate is thus far calculated to be 800 per day across the entire sky, a figure that is considered the most precise estimate of the phenomena’s occurrence that has yet been presented. Most bursts appear to have originated within distant galaxies, meaning they were highly energetic.

Two categories of FRB also emerge: Those that repeat and those that do not. 18 of the CHIME sources do repeat, with the rest one-time events. Among the repeating signals, each burst lasts slightly longer and emits more focused radio frequencies then bursts from single, non-repeating FRBs. We seem to be looking at two different kinds of astrophysical sources, or at least separate mechanisms, and it will be a goal of future data collection to clarify the differences between the two. Image: The first 13 FRBs found by CHIME/FRB (from CHIME/FRB Collaboration, 2019, Nature, 566, 230). In this plot, the effects of dispersion have been removed from each source. Credit: CHIME.

While researchers work to learn what could cause such bright, fast signals, it’s fascinating to compare the FRB work with the use of supernovae as ‘standard candles.’ Evidence for the accelerating expansion of the universe was found by such measurements. Can FRBs be used as standard candles for other kinds of detections? Each FRB yields information about its propagation in terms of how gas and matter are distributed along the way to us. Kaitlyn Shin refers to the possibility of using them as “cosmological probes,” a potential enhanced by this new and growing catalog.

Next post: Liquid Water on a Free Floating Planet’s Moon?