Near-Earth Object Surveyor is a proposed space telescope working at infrared wavelengths, an instrument that just completed a successful mission review and now moves on to the next phase of mission development. In NASA parlance, the upcoming Key Decision Point-B moves into Preliminary Design territory. Getting a spacecraft from concept to flight is a long process, but let’s back out to the broader picture.

Planetary defense is all about finding objects that could impact the Earth with serious consequences. That means setting size targets, and on that score, we’re making progress. In 2010, NASA announced that it had identified 90 percent of all Near Earth Objects larger than 1,000 meters. That moved us to the next target, NEOs larger than 140 meters in size, a goal set by the National Aeronautics and Space Administration Act of 2005. JPL now says about 40% of NEOs within this size range have been identified.

So with this work in progress, what does NEO Surveyor bring to the table? For one thing, it makes it possible to discover asteroids on dangerous trajectories much faster than current methods allow, by including objects that could approach the Earth from directions close to the Sun, a blind spot for ground-based observatories. Amy Mainzer is survey director for NEO Surveyor at the University of Arizona:

“By searching for NEOs closer to the direction of the Sun, NEO Surveyor would help astronomers discover impact hazards that could approach Earth from the daytime sky. NEO Surveyor would also significantly enhance NASA’s ability to determine the specific sizes and characteristics of newly discovered NEOs by using infrared light, complementing ongoing observations being conducted by ground-based observatories and radar.” 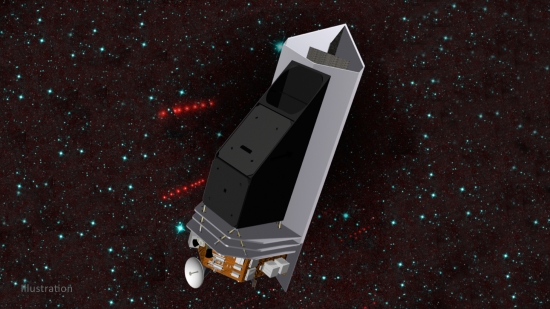 Image: NEO Surveyor is a new mission proposal designed to discover and characterize most of the potentially hazardous asteroids that are near the Earth. Credit: NASA/JPL-Caltech.

It’s worth remembering that while there are currently no impact threats in the catalog for this century, unknown objects still pose problems. Nobody tracked the Chelyabinsk impactor of 2013, reminding us of the dangers of complacency and the need for better sensors, like those NEO Surveyor would deploy in the infrared. The Chelyabinsk object was about 17 meters in size, well below what we are currently cataloging.

But we continue to make progress. Mike Kelley, a NEO Surveyor program scientist at NASA headquarters, believes the spacecraft could bring the catalog of 140-meter objects to 90 percent completion within ten years of launch (in 2026, if NEO Surveyor continues to move on track).

Meanwhile, we should keep in mind missions further along in the pipeline. The Double Asteroid Redirection Test (DART) mission is up for launch later this year. This one is about active planetary defense, with the plan of using a kinetic impactor to change an asteroid’s trajectory. The target is a binary near-Earth asteroid called (65803) Didymos; more specifically, DART will hit Didymos’ moon Dimorphos head on in the fall of 2022. 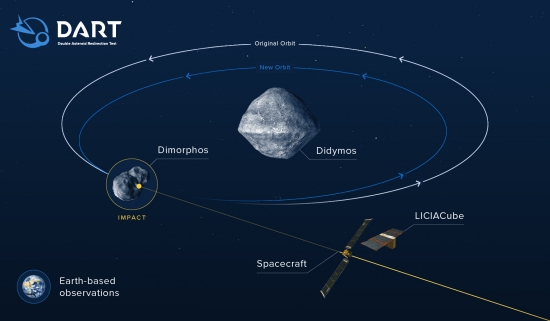 Interestingly, about one sixth of the known near-Earth asteroid (NEA) population are binary or multiple-body systems. Didymos and Dimorphos are separated by about one kilometer, with the 160-meter moon tidally locked to the 780 meter primary. Let’s also note the international aspects of DART, for the mission will work hand in glove with an Italian cubesat called LICIA (Light Italian CubeSat for Imaging of Asteroid) that will observe the impact ejecta, while the European Space Agency’s Hera mission will make a post-impact survey several years after the event.

Asteroid threat mitigation is indeed a global concern, but we’re beginning to experiment with deflection strategies using actual missions. The mission page for DART explains the plan this way:

The DART demonstration has been carefully designed. The impulse of energy that DART delivers to the Didymos binary asteroid system is low and cannot disrupt the asteroid, and Didymos’s orbit does not intersect Earth’s at any point in current predictions. Furthermore, the change in Dimorphos’s orbit is designed to bring its orbit closer to Didymos. The DART mission is a demonstration of capability to respond to a potential asteroid impact threat, should one ever be discovered.

We can hope we’ll never have to use the DART strategy — or others that are under active consideration — to adjust the trajectory of a major impactor, but we obviously need to have the tools available just in case. The need to conduct such tests and to maintain active surveillance as a means of planetary defense is a driver for space technologies we shouldn’t overlook. The capability of adjusting orbits much further from home is a spur toward exploration and surveillance throughout the system.