About 1,000 light years away in the constellation Perseus, the stellar nursery designated NGC 1333 is emerging as a priority target for astronomers planning to use the James Webb Space Telescope. Brown dwarfs come into play in the planned work, as do the free-floating ‘rogue’ planets we discussed recently. For NGC 1333 is a compact, relatively nearby target, positioned at the edge of a star-forming molecular cloud. It’s packed with hundreds of young stars, many of them hidden from view by dust, a venue in which to observe star formation in action.

Hoping to learn more about very low mass objects, Aleks Scholz (University of St Andrews, UK) lays out plans for using JWST to chart the distinctions between objects that emerge out of gravitational collapse of gas and dust clouds, and objects that grow through accretion inside a circumstellar disk. Says Scholz:

“The least massive brown dwarfs identified so far are only five to 10 times heftier than the planet Jupiter. We don’t yet know whether even lower mass objects form in stellar nurseries. With Webb, we expect to identify cluster members as puny as Jupiter for the first time ever. Their numbers relative to heftier brown dwarfs and stars will shed light on their origins and also give us important clues about the star formation process more broadly.” 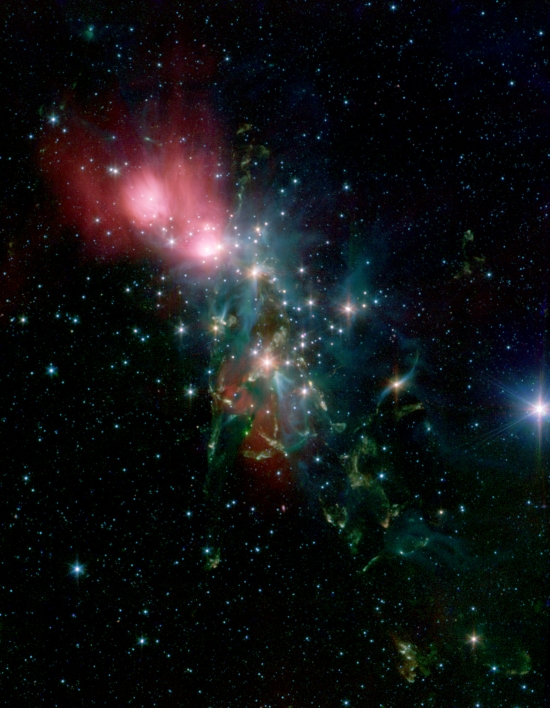 Image: Scientists will use Webb to search the nearby stellar nursery NGC 1333 for its smallest, faintest residents. It is an ideal place to look for very dim, free-floating objects, including those with planetary masses. Credit: NASA/JPL-Caltech/R. A. Gutermuth (Harvard-Smithsonian CfA).

Flying aboard JWST is an instrument called the Near Infrared Imager and Slitless Spectrograph (NIRISS), which Scholz and colleagues will use to analyze the temperature and composition of low-mass objects like these. It is the absorption signature of a particular object, especially water and methane molecules, that will be critical for the work. The advantage of the NIRISS instrument is that it can provide simultaneous spectrographic data on dozens of objects, shortening and simplifying the observational task. One of Scholz’ team, Ray Jayawardhana (Cornell University) has been involved in JWST instrumentation since 2004, and was active in the design and development of NIRISS.

Unable to sustain hydrogen fusion, a brown dwarf may have a mass between 1% and 8% that of the Sun. Most light emitted by these objects is in the infrared, and the already tricky targets are at the top of the size range in this study. Investigating free-floating planets takes us to another level, and even with that in mind, the distinction between a brown dwarf and a giant planet can be blurry. Koraljka Muzic (University of Lisbon), also on Scholz’ team, explains:

“There are some objects with masses below the 10-Jupiter mark freely floating through the cluster. As they don’t orbit any particular star, we may call them brown dwarfs, or planetary-mass objects, since we don’t know better. On the other hand, some massive giant planets may have fusion reactions. And some brown dwarfs may form in a disk.”

Looking through Scholz’ publication list, I noticed a recent paper (“Size and structures of disks around very low mass stars in the Taurus star-forming region” — citation below) that notes the challenge to planet formation models posed by the structure of disks around such stars.

In particular, several giant planets have been found around brown dwarfs, leaving open the question of whether they formed as binary companions or as planets. If the latter, models of planetesimal accretion are hard pressed to explain the process in this environment. The movement of dust presents a problem:

Different physical processes lead to collisions of particles and their potential growth, such as Brownian motion, turbulence, dust settling, and radial drift… All of these processes have a direct or indirect dependency on the properties of the hosting star, such as the temperature and mass. For instance, from theoretical calculations, settling and radial drift are expected to be more efficient in disks around VLMS [Very Low Mass Stars] and BDs [Brown Dwarfs], with BD disks being 15–20% flatter and with radial drift velocities being twice as high or even more in these disks compared to T-Tauri disks…. With radial drift being a more pronounced problem in disks around BDs and VLMS, it is still unknown how this barrier of planet formation is overcome in these environments where the disks are more compact, colder, and have a lower mass.

The paper on the Taurus star-forming region draws on data from ALMA (Atacama Large Millimeter/submillimeter Array), and notes the problems that we can hope JWST will alleviate:

This is going to be an exciting area of research. As the paper points out, for every ten stars that form in our galaxy, somewhere between two and five brown dwarfs also form, and we already know that low-mass M-dwarfs account for as much as 75 percent of the Milky Way’s stars. When massive objects form around or near brown dwarfs, we are challenged to adjust our models of interactions within the disk and re-consider models of gravitational collapse. Interesting brown dwarf issues await JWST if we can just get it into operation.

The Scholz paper cited above is “Size and structures of disks around very low mass stars in the Taurus star-forming region,” Astronomy & Astrophysics Vol. 645, A139 (January 2021). Abstract.