Mapping the Boundary of the Heliosphere

The broader region is called the heliopause, a place where the outflowing solar wind of protons, electrons and alpha particles (two protons and two neutrons tightly bound) encounters what we can call the interstellar wind, itself pushing up against the heliosphere and confining the solar wind-dominated region to a bubble. We now learn that this boundary region has been mapped, showing interactions at the interface.

“Physics models have theorized this boundary for years. But this is the first time we’ve actually been able to measure it and make a three-dimensional map of it.” 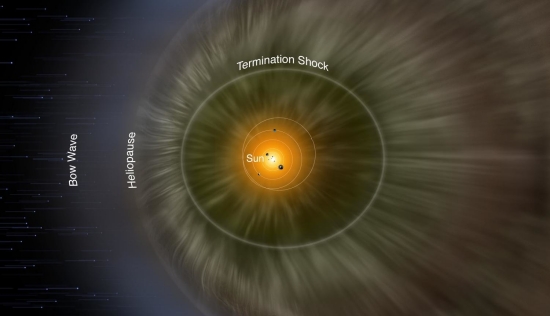 Image: A diagram of our heliosphere. For the first time, scientists have mapped the heliopause, which is the boundary between the heliosphere (brown) and interstellar space (dark blue). Credit: NASA/IBEX/Adler Planetarium.

Riesenfeld and team used data from IBEX, the Interstellar Boundary Explorer satellite, which orbits the Earth but detects energetic neutral atoms (ENAs) from the zone where solar wind particles collide with those of the interstellar wind. Reisenfeld likens the process to bats using sonar, with IBEX using the solar wind as the outgoing signal and mapping the return signal, which varies depending on the intensity of the solar wind striking the heliosheath. Changes in the ENA count trigger the IBEX detectors.

“The solar wind ‘signal’ sent out by the Sun varies in strength, forming a unique pattern,” adds Reisenfeld. “IBEX will see that same pattern in the returning ENA signal, two to six years later, depending on ENA energy and the direction IBEX is looking through the heliosphere. This time difference is how we found the distance to the ENA-source region in a particular direction.”

The IBEX data cover a complete solar cycle from 2009 through 2019. We learn that the minimum distance from the Sun to the heliopause is about 120 AU in the direction facing the interstellar wind, while in the opposite direction, we see a tail that extends to at least 350 AU, which the paper notes is the distance limit of the measurement technique. The asymmetric shape is striking. From the paper’s abstract:

As each point in the sky is sampled once every 6 months, this gives us a time series of 22 points macropixel–1 on which to time-correlate. Consistent with prior studies and heliospheric models, we find that the shortest distance to the heliopause, dHP, is slightly south of the nose direction (dHP ~ 110–120 au), with a flaring toward the flanks and poles (dHP ~ 160–180 au).

Animation: The first three-dimensional map of the boundary between our solar system and interstellar space—a region known as the heliopause. Credit: Reisenfeld et al

The data make it clear that interactions between the solar wind and the interstellar medium occur over distances much larger than the size of the Solar System. It’s also clear that because the solar wind is not steady, the shape of the heliosphere is ever changing. A ‘gust’ of solar wind causes the heliosphere to inflate, with surges of neutral particles along its outer boundary, while lower levels of solar wind cause a contraction that is detected as a concurrent diminution in the number of neutral particles.

IBEX has been a remarkably successful mission, with a whole solar cycle of observations now under its belt. As we assimilate its data, we can look forward to IMAP — the Interstellar Mapping and Acceleration Probe, which is scheduled to launch in late 2024 and should enable scientists to extend the solid work IBEX has begun.

The paper is Reisenfeld et al., “A Three-dimensional Map of the Heliosphere from IBEX,” Astrophysical Journal Supplement Series Vol. 254, No. 2 (2021) Abstract. The paper is part of a trio of contributions entitled A Full Solar Cycle of Interstellar Boundary Explorer (IBEX) Observations, available here.

Next post: Finding the Missing Link: How We Could Discover Interstellar Quantum Communications