Most autotrophic organisms on Earth use photosynthesis to work their magic. Indeed, photosynthesis accounts for about 99 percent of Earth’s entire biomass (a figure likely to change as we learn more about what lies beneath the surface). The process allows organic matter to be synthesized from inorganic elements, drawing on solar radiation as the energy source, and providing the oxygen levels needed to drive complex, multicellular life.

Does photosynthesis occur in other star systems? We know that it emerged early on Earth, and can trace its development back to the Great Oxidation Event in the range of 2.4 billion years ago, although its origins are still under scrutiny. In a new paper, lead author Giovanni Covone (University of Naples) and colleagues examine the conditions needed for oxygen-based photosynthesis to develop on an Earth-like planet not just at Earth’s level of stellar flux but throughout the classical habitable zone.

The key to the study is stellar radiation as received by the planet from the host star, with the authors examining the efficiency with which living organisms could produce nutrients and molecular oxygen using oxygenic photosynthesis. Here we are considering what the paper describes as photosynthetically active radiation (PAR). Key to the analysis is the idea of exegy, which the authors explain as follows:

…we estimate the efficiency of the PAR radiation driving OP [oxygenic photosynthesis] as a function of the host-star temperature by means of the notion of exergy. Exergy can be defined as the maximum useful work obtainable from the considered system in given environmental conditions (see e.g. Petela 2008; Ptasinski 2016). In other words, exergy is a measure of the quality of energy (Austbø, Løvseth & Gundersen 2014). Living organisms are dissipative structures away from thermodynamic equilibrium with the environment thanks to the constant input of exergy stellar radiation.

This idea of the quality of energy has been the subject of several exoplanet investigations, most recently that of Caleb Scharf (Columbia University), who studied photosynthetic efficiency as a function of a star’s effective temperature over the entire radiation spectrum. Covone and team keep their focus on photosynthetically active radiation, constructing a table showing the parameters of Earth-analog planets and their host stars, including worlds at Proxima Centauri, Kepler 186 and Trappist-1.

The question is whether living organisms can efficiently produce the nutrients and molecular oxygen they need in these conditions via normal photosynthesis. 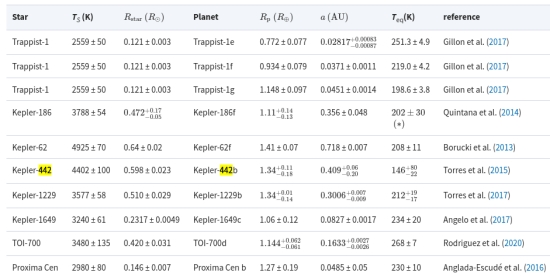 Table 1. Parameters of the known Earth analogue planets in the HZ and their host stars. Equilibrium temperature values with * have been derived in this work. For Proxima Centauri b the estimate of the mass is given since the planet is probably not a transiting one. Credit: Covone et al.

Considered in terms of the exergetic efficiency of a star’s radiation within this range, the authors find that only Kepler=442b receives a photon flux sufficient to sustain a biosphere something like the Earth’s. This is an interesting world, a confirmed super-Earth orbiting a K-class star in Lyra about 1200 light years out. It does not appear to be tidally locked and offers what the scientists consider to be a good target for a search for biosignatures. But the other worlds lack the energy in the correct wavelength range to sustain a rich biosphere. The figure below is striking: 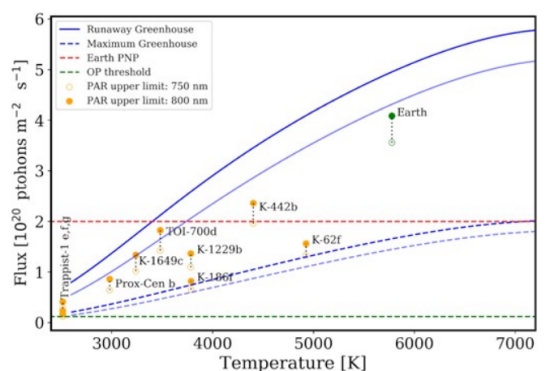 Image: This is Figure 1 from the paper. Caption: Photons flux in two differently defined PAR ranges at the surface of planets at the two edges of the HZ (dark blue lines for an upper limit of 800 nm and light blue for an upper limit of 750 nm), as a function of the star effective temperature, in units of 1020 photons s−1 m−2 (HZ inner edge: continuous line; HZ outer edge: dotted line). The green dot and circle show the photon flux in PAR range on the Earth surface, yellow dots and circles the estimated photon flux on the surface of known Earth analogues (see Table 1), respectively, with an upper limit for the PAR range of 800 nm (dots) and 750 nm (circles). The red dotted line shows the average photon flux which is necessary to sustain the Earth biosphere. The green dotted line shows the typical lower threshold for OP on Earth. Credit: Covone et al.

Of the planets cited in Table 1, then, only Kepler-442b comes close to receiving the stellar radiation needed. Indeed, given these findings, many stars in the K-class would be unlikely to supply the radiation needed to support a complex biosphere. Nor would red dwarf stars, which would not deliver enough energy to their planets to activate photosynthesis in the first place. Giovanni Covone comments:

“Since red dwarfs are by far the most common type of star in our galaxy, this result indicates that Earth-like conditions on other planets may be much less common than we might hope.”

“This study puts strong constraints on the parameter space for complex life, so unfortunately it appears that the “sweet spot” for hosting a rich Earth-like biosphere is not so wide.”

A much narrower than expected range for the habitable zone? Perhaps in terms of that exact ‘sweet spot’ that mirrors Earth. But the authors are quick to add that caution is in order in terms of biomass production, which softens the message considerably. This passage receives prominence in the paper’s conclusion (italics mine):

…we should bear in mind that biomass production on Earth is not limited by the quantity neither [sic] the quality of the incoming radiation, but rather by the availability of nutrients. For instance, Lin et al. (2016) found that in ocean phytoplankton populations about 60 per cent of the absorbed PAR solar energy is dissipated as heat. Generally, phytoplankton operate at a much lower photosynthetic efficiency than they are potentially capable of achieving, just because in most situations light is a very abundant resource on Earth. Moreover, OP does not respond linearly to the input photon flux (see Ritchie et al. 2018). For these reasons, it is not immediate to draw consequences on the amount of biomass produced from the estimated PAR photon flux and its exergy content. Exoplanets with lower values of these quantities could host a biosphere comparable with the one on our planet.

We should not, in other words, read this as a definitive statement on habitable zone width but rather a pointer to further work that will need to broaden the investigation. The authors themselves mention “exergy destruction that occurs as consequence of biological conversion taking place after the light harvesting, in the leaf transpiration and metabolism” and also atmospheric absorption that changes the radiation spectrum. But solutions beyond oxygenic photosynthesis are also possible, a direction of study that could point to near-infrared light harvesting on red dwarf planets.

Next post: A Long Period Super-Earth around a Nearby Star