Huge Comet Found to be Active

An interstellar freebie like ‘Oumuamua or 2I/Borisov is priceless. We don’t need to travel light years to see it because it comes to us. Although we’re expecting to find a lot more such objects as instruments like the Vera Rubin Observatory come online, right now only two are known to have passed through our system. But only slightly less inaccessible places like the Oort Cloud also bring gifts in the form of long-period comets, and I don’t want the advent of C/2014 UN271 Bernardinelli-Bernstein to go unnoticed in these pages, given its startling size and already detected activity.

Pedro Bernardinelli (University of Pennsylvania), who along with colleague Gary Bernstein discovered the comet, estimates its nucleus as being between 100 and 200 kilometers (62 and 125 miles) long. This dwarfs Hale-Bopp, and Colin Snodgrass (University of Edinburgh) is quoted in the New York Times as saying: “With a reasonable degree of certainty, it’s the biggest comet that we’ve ever seen.”

The discovery involved reprocessing data from the Dark Energy Survey, data that had been acquired via the 4-meter Blanco instrument at Cerro Tololo in Chile between 2013 and 2019. Bernardinelli and Bernstein announced the find in June of this year.

C/2014 UN271 was at roughly the distance of Neptune when first acquired in the data, although it is now about 20 AU out, or twice the distance of Saturn. While there was no statement about activity on the comet when the discovery was announced, astronomers at Las Cumbres Observatory quickly turned their network of telescopes on the object.

Las Cumbres offers a globally distributed network of telescopes with 24-hour robotic operation that is finely tuned to detect transients. Its instruments have now revealed that C/2014 UN271 is active, with the 1-meter LCO telescope at the South African Astronomical Observatory returning images that, in keeping with the international flavor of the observing effort, drew the attention of astronomers in New Zealand.

“Since we’re a team based all around the world, it just happened that it was my afternoon, while the other folks were asleep. The first image had the comet obscured by a satellite streak and my heart sank. But then the others were clear enough and gosh: there it was, definitely a beautiful little fuzzy dot, not at all crisp like its neighbouring stars!”

Comet C/2014 UN271 was indeed active, that fuzzy dot indicating a coma. Volatile ices, likely carbon dioxide and carbon monoxide, were already reacting to the scant sunlight available. The coma was active even with the comet almost three billion kilometers from the Sun. No comet has ever been observed to be active this far from Sol. 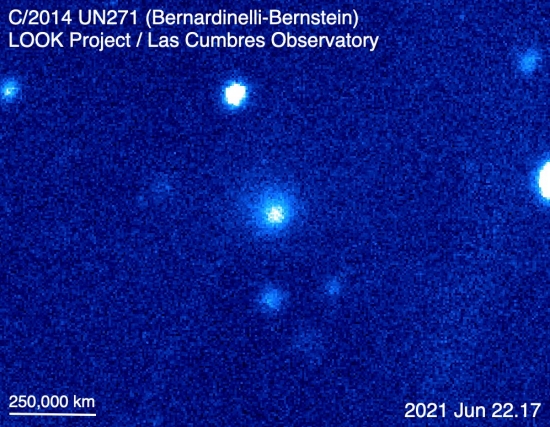 Image: Comet C/2014 UN271 (Bernardinelli-Bernstein), as seen in a synthetic color composite image made with the Las Cumbres Observatory 1-meter telescope at Sutherland, South Africa, on 22 June 2021. The diffuse cloud is the comet’s coma. Credit: LOOK/LCO.

This is one useful object, particularly since it was discovered early in its entry into the realm of the planets. It should offer astronomers over a decade of observing time. Perihelion is not expected until 2031, although when it comes, the comet will still be well beyond Saturn. Its orbit is now projected to take three million years to complete. 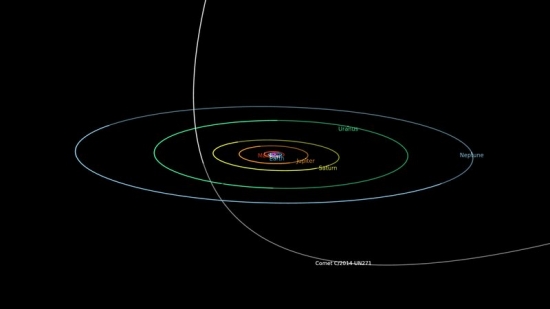 Image: An orbital diagram showing the path of Comet C/2014 UN271 (Bernardinelli-Bernstein) through the Solar System. The comets’ path is shown in gray when it is below the plane of the planets and in bold white when it is above the plane. Credit: NASA.

The discovery of activity on C/2014 UN271 draws attention to the LOOK Project now active at Las Cumbres. LOOK stands for LCO Outbursting Objects Key, an effort that investigates unexpected brightening of comets through burst activity and other aspects of comet evolution. Out of all this we should get a better understanding of comet outbursts, of which C/2014 UN271 is offering such a tantalizing sample.

“There are now a large number of surveys, such as the Zwicky Transient Facility and the upcoming Vera C. Rubin Observatory, that are monitoring parts of the sky every night. These surveys can provide alerts if one of the comets changes brightness suddenly and then we can trigger the robotic telescopes of LCO to get us more detailed data and a longer look at the changing comet while the survey moves onto other areas of the sky. The robotic telescopes and sophisticated software of LCO allow us to get images of a new event within 15 minutes of an alert. This lets us really study these outbursts as they evolve.”

That’s good news for the next interstellar object that wanders by as well. One of these days our growing network of instruments will be able to spot something like ‘Oumuamua in time for a spacecraft to pay it a visit.

Next post: The Io Trigger: Radio Waves at Jupiter