If we ever find life on a planet orbiting a white dwarf star, it will be life that has emerged only after the red giant phase has passed and the white dwarf has emerged as a stellar relic. That’s the conclusion of a study being discussed today at the National Astronomy Meeting of Britain’s Royal Astronomical Society, which convened online due to COVID concerns. The work is also recently published in Monthly Notices of the Royal Astronomical Society.

At issue is the damage caused by powerful stellar winds that occur as a star makes the transition from red giant to white dwarf stage. This is the scenario that awaits our own Sun, which should swell to red giant status in roughly five billion years, eventually becoming a dense white dwarf about the size of the Earth. We’ve speculated in these pages about life surviving this phase of stellar evolution, but the study, in the hands of Dimitri Veras (Warwick University) concludes that this is all but impossible.

We know that the Earth is protected by a magnetosphere that thwarts atmospheric depletion by channeling harmful particles along magnetic field lines. You would think that a magnetosphere would ease this kind of erosion in the far future for those planets that have one (Mars, for example, does not) but the stellar winds of the evolving star will be far stronger than the Sun’s today. The authors modeled the winds from eleven different kinds of stars in a range of masses. They find this:

The plot shows that an exo-Jovian analogue would just reach the threshold for hosting a magnetopause at some point during giant branch evolution. However, much higher fields would be required to maintain any magnetopause throughout these giant branch phases. For terrestrial and potentially habitable planets, any protection previously afforded by the magnetosphere would effectively disappear. This lack of protection, compounded with orbital expansion and varying stellar luminosities, suggest that life would be challenged to survive throughout the giant branch phases of stellar evolution.

Could scenarios emerge in which moons around the gas giants maintain life under an ice crust? It’s hard to see how. Veras, working with Aline Vidotto (Trinity College, Dublin) points out that a habitable zone supporting liquid water would move from some 150 million kilometers from the Sun to up to 6 billion kilometers, pushing it beyond the orbit of Neptune. Planets can migrate during this phase, but the paper argues that the habitable zone moves outward faster than the planet, a likely fatal threat. Thus life around a white dwarf will need to start over. 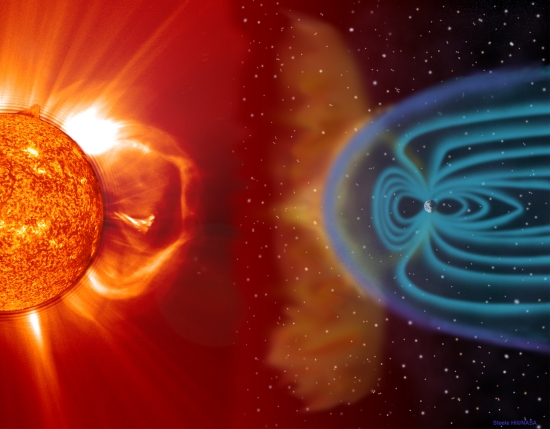 Image: An illustration of material being ejected from the Sun (left) interacting with the magnetosphere of the Earth (right). When the Sun evolves to become a red giant star, the Earth may be swallowed by our star’s atmosphere, and with a much more unstable solar wind, even the resilient and protective magnetospheres of the giant outer planets may be stripped away. MSFC / NASA. Licence type Attribution (CC BY 4.0).

Thus the movement of the habitable zone outward and the difficulty in maintaining a magnetosphere throughout this phase of stellar evolution make preserving habitability extremely unlikely. The authors’ model shows that the strong stellar wind combines with the expanding orbits of surviving planets to first shrink and then expand the magnetosphere of a planet over time. It would take a magnetic field 100 times stronger than Jupiter’s to maintain a stable magnetosphere all the way through the transition of red giant to white dwarf:

“We find that a planetary magnetosphere will always be quashed at some point during the giant branch phases, unless the planet’s magnetic field strength is at least two orders of magnitude higher than Jupiter’s current value.”

And afterwards? White dwarfs do not emit stellar winds, so that threat disappears. Any life we find around a white dwarf will doubtless have developed during the white dwarf phase. If such exists, we may be able to detect its biomarkers through future space missions — recall that white dwarfs are roughly the size of the Earth, and a transiting planet would produce profound transit depth and would seemingly be an ideal target for transmission spectroscopy, in which we analyze the components of a planetary atmosphere as starlight passes through it.

Most of the exoplanets we know about orbit main sequence stars, but about 100 are known to orbit red giants, and at least four have been found orbiting white dwarf stars. These worlds are survivors of stellar evolution and thus useful as benchmarks in tracing the lifetime of their systems. Two of the white dwarf planets, says Veras, are close to their star’s habitable zone, an indication of planet migration showing that an Earth-sized planet could exist in such an orbit. And he adds: