‘Echoes’ from the Far Side of a Black Hole

The first direct observation of light from behind a black hole has just been described in a paper in Nature. What is striking in this work is not so much the confirmation, yet again, of Einstein’s General Relativity, but the fact that we can observe the effect in action in this environment. Having just read Heino Falcke’s Light in the Darkness: Black Holes, the Universe, and Us (HarperOne 2021), I have been thinking a lot about observing what was once thought unobservable, as Falcke and the worldwide interferometric effort called the Event Horizon Telescope managed to do when they produced the first image of a black hole. 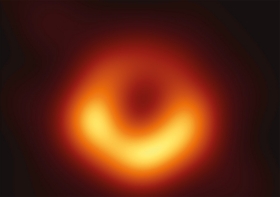 The famous image out of that work that went worldwide in the media was of the supermassive black hole at the center of the galaxy M87, while the new paper — which offers no image but rather data on telltale X-ray emissions — covers a galaxy called I Zwicky 1 (I Zw 1), a Seyfert galaxy 800 million light years from the Sun. These are active galaxies with supermassive black holes at their centers and quasar-like nuclei. The data on this one were drawn from observations of I Zw 1 in early 2020 by the X-ray telescopes NuSTAR and XMM-Newton.

Image: The image of the black hole at the center of M87 shows the effect of the accretion disc as well as the black hole’s shadow. Credit: Akiyama et al. and ApJL.

Dan Wilkins, lead author of the paper on this work in Nature, is a research scientist at the Kavli Institute for Particle Astrophysics and Cosmology at Stanford and SLAC National Accelerator Laboratory. He explains how the malleability of spacetime makes the observations of I Zw 1’s black hole possible:

“Any light that goes into that black hole doesn’t come out, so we shouldn’t be able to see anything that’s behind the black hole. The reason we can see that is because that black hole is warping space, bending light and twisting magnetic fields around itself.” 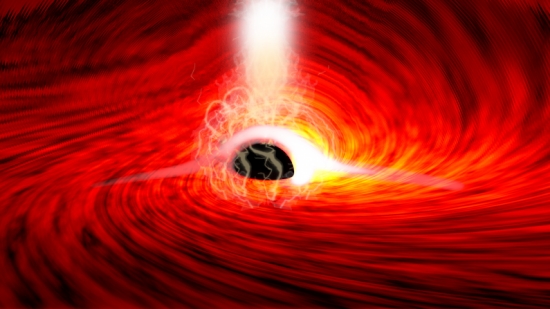 Image: Researchers observed bright flares of X-ray emissions, produced as gas falls into a supermassive black hole. The flares echoed off of the gas falling into the black hole, and as the flares were subsiding, short flashes of X-rays were seen – corresponding to the reflection of the flares from the far side of the disk, bent around the black hole by its strong gravitational field. Credit: Dan Wilkins.

All of this fits current thinking about how the black hole corona forms, but the researchers then detected a series of smaller X-ray flashes, reflections from the inner part of the accretion disk with calculable reverberation time delays. Wilkins calls these ‘echoes’ because they are the same X-ray flares but reflected from the back of the disk. In essence, this gives us the first information we have to characterize the far side of a black hole, and follows from Wilkins’ earlier research. The scientist adds:

“This magnetic field getting tied up and then snapping close to the black hole heats everything around it and produces these high energy electrons that then go on to produce the X-rays. I’ve been building theoretical predictions of how these echoes appear to us for a few years. I’d already seen them in the theory I’ve been developing, so once I saw them in the telescope observations, I could figure out the connection.” 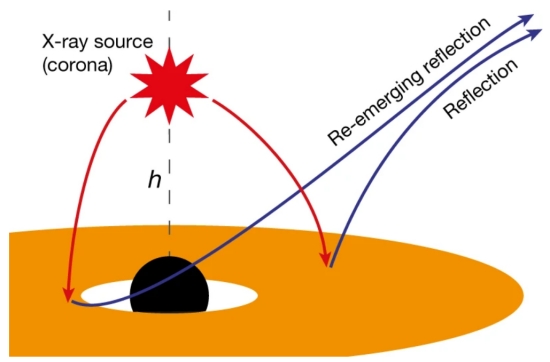 Image: This is Figure 2 from the paper, labelled “Schematic of the X-ray reverberation model.” Caption: X-rays are emitted from a corona of energetic particles close to the black hole. Some of these rays reach the observer directly, but some illuminate the inner regions of the accretion disk and are observed reflected from the disk. Strong light bending in the gravitational field around the black hole focuses the rays towards the black hole and onto the inner regions of the disk. Rays reflected from the back of the disk can be bent around the (spinning) black hole, allowing the re-emergence of X-rays from parts of the disk that would classically be hidden behind the black hole. Credit: Wilkins et al.

What I find extraordinary is that we are getting a glimpse of the accretion disk at work to a fine level of detail. The flares in this black hole’s corona “reveal the temporal response of the illuminated accretion disk,” as the paper puts it, going on to explain the strong Doppler effects at play here:

Emission line photons from different parts of the disk experience different Doppler shifts, due to the variation in the line-of-sight velocity across the disk, and also experience gravitational redshifts, which increase closer to the black hole. The energy shifts of the line photons therefore contain information about the positions on the accretion disk from which they were emitted. The light travel time varies according to the distance of each part of the disk from the corona, and the line emission at different energy shifts is expected to respond to the flare at different times.

Data from the coronal flares and their reverberations allow the team to measure the height of the X-ray source above the disk and also to measure the mass of the black hole itself, which turns out to be on the order of 30 million solar masses. The authors go into detail about the factors at play in the mass estimate, and as the paper is available online, I’ll leave that analysis for those interested in following it up themselves.

Once again black holes provide a way of seeing what had been thought unobservable. Co-author Roger Blandford, also at Stanford, takes note of how far we’ve come:

“Fifty years ago, when astrophysicists started speculating about how the magnetic field might behave close to a black hole, they had no idea that one day we might have the techniques to observe this directly and see Einstein’s general theory of relativity in action.”

Pushing yet deeper will be the European Space Agency’s X-ray observatory Athena (Advanced Telescope for High-ENergy Astrophysics). Wilkins is part of the team developing the Wide Field Imager detector for the telescope, scheduled for launch in 2031.