In addition to its sample return mission at asteroid Bennu, OSIRIS-REx (Origins, Spectral Interpretation, Resource Identification, Security-Regolith Explorer) has tightened our projections about the object’s future trajectory. Although the impact possibility on Earth through the year 2300 is on the order of 1 in 1750 (0.057%), it’s an object we want to keep an eye on, because in 2135 Bennu will make a close approach to Earth that could nudge its trajectory in ways that are difficult to anticipate.

OSIRIS-REx spent more than two years working near the 500-meter wide asteroid, studying its mass and composition while tracking its spin and orbital trajectory. In terms of the latter, even factors as tiny as the force the spacecraft exerted during its sample collection event in October of 2020, a mere touch-and-go, had to be considered (the study confirms that the effect was negligible). Far more significant is the Yarkovsky effect, which occurs as solar heating eases on the nightside during the asteroid’s rotation and is radiated away as infrared energy, generating thrust.

It’s the tiniest of effects at Bennu, says Steve Chesley (JPL), a co-investigator on the study that has just appeared in Icarus, but of course it builds over time and has consequences for the asteroid’s path:

“The Yarkovsky effect will act on all asteroids of all sizes, and while it has been measured for a small fraction of the asteroid population from afar, OSIRIS-REx gave us the first opportunity to measure it in detail as Bennu traveled around the Sun. The effect on Bennu is equivalent to the weight of three grapes constantly acting on the asteroid – tiny, yes, but significant when determining Bennu’s future impact chances over the decades and centuries to come.”

Imagine how tricky it is to measure the cumulative effects of the Yarkovsky effect on a rotating object of uneven shape. Three close encounters in 1999, 2005 and 2011 were extensively tracked from the ground, but OSIRIS-REx data from the object itself have now allowed researchers to model an asteroid’s trajectory to the highest level of precision ever. Bennu’s future path is well known up to 2135. The question during the close encounter in that year will be whether it will pass through a dangerous ‘gravitational keyhole,’ an area where, as it responds to the effects of Earth’s gravity, the asteroid could become more likely to present an impact threat in the future. There is one ‘keyhole’ solution that would result in an Earth impact in 2182, with an impact probability of 1 in 2,700 (or about 0.037%).

In addition to the Yarkovsky factor, scientists have to consider the gravitational influence of the Sun and other objects in the Solar System including more than 300 asteroids that could have some effect. The solar wind streaming at variable rates outward from the Sun has to be considered as a source of pressure, and remember that OSIRIS-REx also discovered that Bennu was shedding rock particles, likely the result of thermal fracturing due to heating and cooling during rotation. These events along with the drag caused by interplanetary dust all affect the future trajectory. 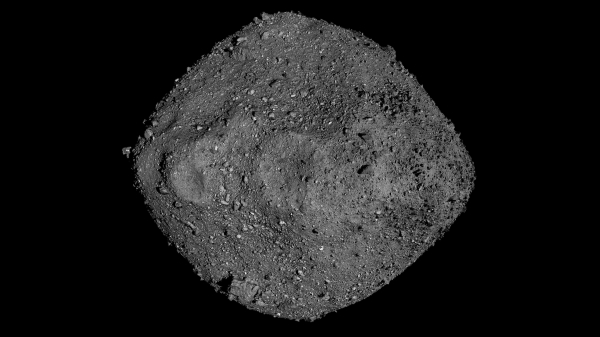 Image: This mosaic of Bennu was created using observations made by NASA’s OSIRIS-REx spacecraft that was in close proximity to the asteroid for over two years. Credit: NASA/Goddard/University of Arizona.

The authors note that a close approach to Earth that will occur in 2037 will be the next opportunity to collect radar data and therefore gauge the accuracy of their work while improving the trajectory projections even more. In their conclusion they add this (and note that we are dealing with not one but numerous gravitational keyholes)::

…improved orbital knowledge allowed us to refine the impact hazard assessment, which we extended through 2300. The dense structure of keyholes on the B-plane of the 2135 encounter with Earth (Chesley et al., 2014) made it unlikely to avoid all possible pathways to impact. Still, the uncertainties for the 2135 encounter decreased by a factor of about 20, and so many of the most significant impacts found by Chesley et al. (2014) are now ruled out.

The fact that we have a sample return on the way adds another plus for OSIRIS-REx. Dante Lauretta (University of Arizona) is principal investigator for the mission:

“The spacecraft is now returning home, carrying a precious sample from this fascinating ancient object that will help us better understand not only the history of the solar system but also the role of sunlight in altering Bennu’s orbit since we will measure the asteroid’s thermal properties at unprecedented scales in laboratories on Earth.”

The opportunity given us by OSIRIS-REx to test models and calculate future trajectory probabilities shows what can be done with objects with even a remote chance of striking the planet. The trajectory changes coming in 2135’s close approach will be watched carefully by way of further understanding how to tighten such calculations. By then, in the highly unlikely event of a dangerous deflection toward impact, we can hope to have methods in place to force a further trajectory change of our own.