We’ve just seen the coinage of a new word that denotes an entirely novel category of planets. Out of research at the University of Cambridge comes a paper on a subset of habitable worlds the scientists have dubbed ‘Hycean’ planets. These are hot, ocean-covered planets with habitable surface conditions under atmospheres rich in hydrogen. The authors believe they are more common than Earth-class worlds (although much depends upon their composition), and should offer considerable advantages when it comes to the detection of biosignatures.

Hycean worlds give us another habitable zone, this one taking in a larger region than the liquid water habitable zone we’ve always considered as the home to Earth. In every respect they challenge our categories. Not so long ago a Cambridge team led by Nikku Madhusudhan found that K2-18b, 2.6 times Earth’s radius and 8.6 times its mass, could maintain liquid water at habitable temperatures beneath its hydrogen atmosphere. The team has now generalized this work with a full investigation of the planetary and stellar properties making life possible on such planets.

Planets between the size of Earth and Neptune are thus far the most common type of planet we’ve found, generally being labeled as ‘super-Earths’ or ‘mini-Neptunes.’ There are no analogues to planets like this in the Solar System; they are classed as super-Earths or mini-Neptunes largely on the basis of their density as inferred by their mass and radius. Some may be predominantly rocky, while others are closer to the ice giants in our system. Some may be water worlds. Some of them are in the habitable zones of nearby M-dwarf stars, making them good candidates for atmospheric studies and possible biosignature detections.

For planets with a hydrogen atmosphere surrounding a layer of high-pressure water covering an inner core of rock and iron may become astrobiologically interesting. It’s true that too dense a hydrogen envelope would create temperature and pressure at the surface that would preclude life. But if the atmosphere is not too thick, life-sustaining temperatures can exist.

The Hycean planets thus represent a new category of potentially habitable worlds, and can be up to 2.6 times the size of Earth, with atmospheric temperatures up to 200 degrees Celsius, while still remaining habitable. They are defined not only by size but also by mass, temperature and atmospheric pressure. Conditions in their oceans may allow at least microbial life.

We are looking at a wide habitable zone as well. Its range takes in planets with orbital separations so large that the only energy source would be internal heat. It also extends to planets orbiting so close to the host star that they are tidally locked, but can support life on their dark sides. The span of possible temperatures allowing life to exist is thus substantial. About the tidally locked worlds the authors refer to as ‘Dark Hycean,’ for example, we learn this: 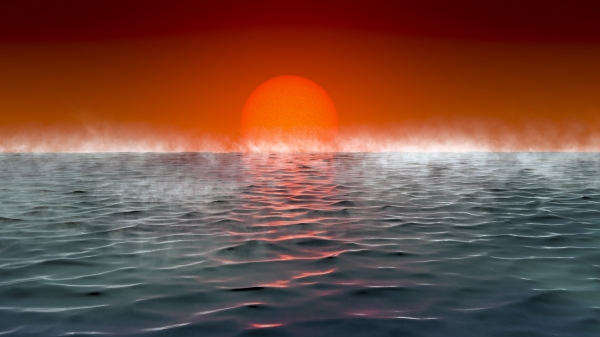 The researchers believe these interesting worlds are common. In their paper, they present a sample of potential Hycean targets that could be useful fodder for next-generation telescopes. All of these orbit red dwarf stars close enough to be suitable targets for the James Webb Space Telescope; none are more than 150 light years away. JWST observations of K2-18b are already being considered and could conceivably provide a biosignature detection. For having looked at five potential biomakers in Hycean atmospheres, the authors note:

Hycean atmospheres may offer even better opportunities for detecting these biomarkers than those of rocky super-earths… For a 10 M⊕ planet, the Hycean radius range is ∼2-2.6 R⊕ compared to the super-Earth radius of 1.75 R⊕ considered in Seager et al. (2013b). The increased radii and lower gravities lead to larger, more easily detectable spectral signatures for Hycean planets. Second, considering that prominent sources of the above biomarkers are thought to be aquatic microorganisms, we expect them to be even more abundant on Hycean worlds compared to predominantly rocky worlds.

The fact that Hycean planets open up the discovery space for worlds that could support life makes them noteworthy. We begin to consider planets of higher mass and radius than before, provided they have a rocky core that, according to the paper, is at least 10% of planetary mass and is of Earth-like composition. Their wide habitable zone expands the area for detection, while presenting a range of challenges that is likewise wide. Mass and radius help us spot a Hycean candidate, but they alone are not sufficient. We also need to learn more about temperatures and pressures in the ocean, and basic properties of the atmosphere:

,,,even if a candidate Hycean planet is in the Hycean HZ it may not necessarily have the right conditions for habitability, e.g., the internal structure and atmospheric properties may be such that the ocean surface pressure and/or temperature is too high… [T]he detection of H2O in the atmosphere does not guarantee the presence of an ocean on the planet, as H2O can be naturally occurring in H2-rich atmospheres as the prominent oxygen bearing species. Conversely, the nondetection of H2O does not preclude the presence of an ocean, since at low atmospheric temperatures H2O can rain out and not be detectable in the atmosphere. Nevertheless, in all these aspects Hycean candidates offer better prospects for establishing their habitability compared to habitable rocky exoplanets, which are inherently harder to characterize.

Given the wide range of transiting worlds we’ve discovered between 1 and 2.6 Earth radii, Hycean worlds offer no shortage of targets and if nothing else provide opportunities for atmospheric characterization that, according to the authors, should be less challenging than similar work on rocky exoplanets. Their large radius and thick atmospheres seem made to order for JWST and future instruments like the Extremely Large Telescope. Although not similar to Earth, Hycean planets can be valuable venues for detecting trace biosignatures. That alone contributes to the larger quest of finding life on planets more similar to our own.

Previous post: A Huge Population of Interstellar Comets in the Oort Cloud