A century ago, when American magazine science fiction was developing, the Solar System seemed a relatively tidy place. At least, it did in comparison to today. The first issue of Hugo Gernsback’s Amazing Stories serialized a reprint of Jules Verne’s 1877 novel Off on a Comet and, indeed, in those days comets were the objects most likely to move around the system. The asteroids seemed distant in their belt and in stable orbits and there was little else between the planets. There was no Pluto.

Today, of course, we seem to have debris everywhere. The main belt asteroids are joined by trojan objects like the large population around Jupiter, and there is another belt of ancient material out beyond Neptune, the Kuiper Belt. In Earth’s neighborhood, interesting objects like 2021 PJ1, whose approach to our planet occurred on August 14 at 1.7 million kilometers, remind us that there is a large population of asteroids that move in orbits well inside the main belt, and could conceivably present a danger to us, at least enough of one to demand that we keep a close eye on their trajectories.

2021 PJ1 has a certain claim to fame, being the 1,000th near-Earth asteroid to be observed by planetary radar in the past 50 years. In this technique, we bounce a radar signal off an object and examine the photonic echo. The first asteroid to be viewed in this way was 1566 Icarus, all the way back in 1968, ‘painted’ by Goldstone radar, the same facility near Barstow, California that produced the PJ1 data this summer. 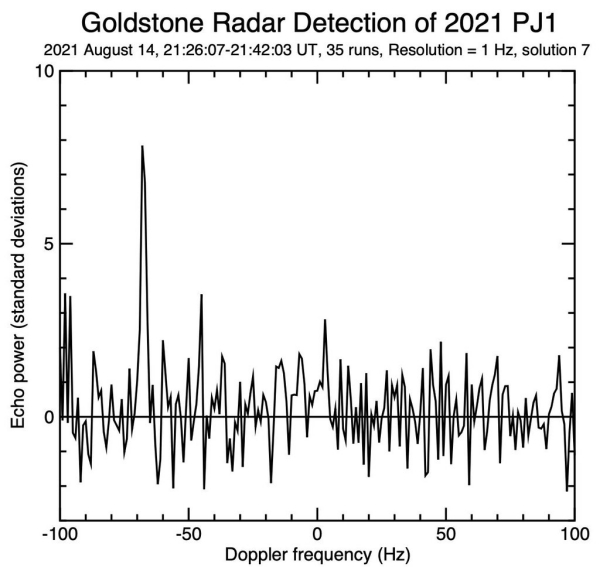 Image: The 70-meter Deep Space Station 14 (DSS-14) antenna at the Deep Space Network’s Goldstone Deep Space Complex near Barstow, California, was able to measure the Doppler frequency of the radio waves that reflected off asteroid 2021 PJ1’s surface. The figure shows radar echo signal strength on the vertical axis versus Doppler frequency (in units of hertz, or Hz) on the horizontal axis. The strong spike at a value of minus 70 Hz is the reflected signal (or “echo”) from 2021 PJ1; the other, smaller spikes are receiver noise. Credit: NASA/JPL-Caltech.

I always think primarily of Arecibo when planetary radar comes to mind, and in fact its radar capabilities were a prime reason for fighting to sustain its funding before its collapse in 2020. Well over half of existing NEO radar observations were made by its 305-meter dish. But the tally of the Goldstone Deep Space Complex is impressive via its DSS-14 70-meter and 34-meter DSS-13 antennae, with 374 near-Earth asteroids to date. Moreover, the Deep Space Network’s Canberra site, working with Australian observatories including Parkes, has notched up another fourteen.

NEA 1,001 came only a week after 2021 PJ1, an object labeled 2016 AJ193 that moved by at about 3.4 million kilometers. While 2021 PJ1 was small — between 20 and 30 meters wide — 2016 AJ193, although more distant, was a much easier catch because it’s some 40 times larger, with a diameter in the range of 1.3 kilometers. Originally observed by the NEOWISE mission, this asteroid gave us a lot more than plots on a graph: Ridges, hills, concavities and possible boulders appeared in the Goldstone observations, which also determined that it rotates with a period of 3.5 hours.

Image: This animation shows asteroid 2016 AJ193 rotating as it was observed by Goldstone’s 70-meter antenna on Aug. 22, 2021. 1.3-kilometers wide, the object was the 1,001st near-Earth asteroid to be measured by planetary radar since 1968. Credit: NASA/JPL-Caltech.

“The 2016 AJ193 approach provided an important opportunity to study the object’s properties and improve our understanding of its future motion around the Sun. It has a cometary orbit, which suggests that it may be an inactive comet. But we knew little about it before this pass, other than its size and how much sunlight its surface reflects, so we planned this observing campaign years ago.”

The significance of planetary radar for simple security is obvious. Including telescopes on the ground and in space, we’re tracking close to 27,000 near-Earth objects, characterizing them through observations like the recent Goldstone work. The more we learn about the size, shape and composition of NEOs, the better we’ll be able to resolve questions about their trajectories and any future danger they might pose. This, in company with data from asteroid missions like Hayabusa2 and OSIRIS-REx, will help us tune our threat mitigation strategies if we ever do have to nudge an NEO. 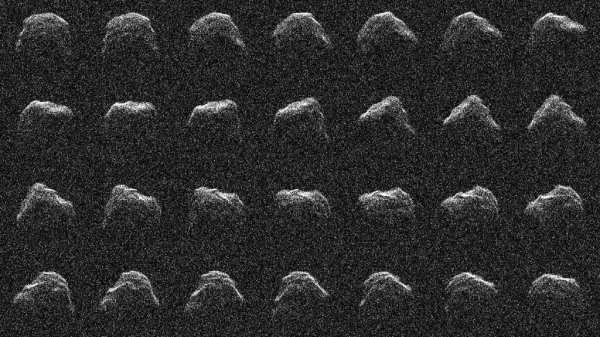 Next post: SETI as a Central Project: An Addendum to Space Development Futures