White dwarfs have turned out to be more interesting than I had imagined. We know how they form: A star like the Sun exhausts the hydrogen in its core and swells into a red giant, a scenario that is a trope in science fiction, as it posits an Earth of the far-future incinerated by its star. Losing its outer layers near the end of nuclear burning, a red giant ultimately leaves behind an object with much of the mass of the Sun now crammed into a white dwarf that is about the size of the Earth. For years I assumed white dwarfs were dead ends, a terminus for life whose only function seemed to be in binary systems, where they could be the locus, through accretion from the other star, of a stellar explosion in the form of a nova.

Lately we’ve been learning, though, that through analysis of their atmospheres, white dwarfs can yield information about objects that have fallen into them, such as remnants of the original stellar system. Some white dwarfs may have habitable zones lasting several billion years, an interesting thought if surviving planets in the system migrate inward. And now, thanks to Hubble data, we are learning that white dwarfs may have a longer lifetime than previously thought. Continuing to burn hydrogen, some of these stars may be older than they look.

The work was coordinated by Francesco Ferraro (Alma Mater Studiorum Università di Bologna / Italian National Institute for Astrophysics), who points to the useful role of white dwarfs in determining the ages of stars. The white dwarf cooling rate has been used as a natural clock as a way of calibrating the age of star clusters, as their cooling seemed easy to model by following the relationship between age and temperature. But the new study finds that white dwarf aging is nowhere near as simple as this, so an accepted method of measuring cluster ages may have to be re-examined.

To investigate white dwarf aging, the scientists looked at the globular clusters M3 in the constellation Canes Venatici and M13 in Hercules, in which stars in aggregate show common values of metallicity and age. As always in astronomy, the word ‘metals’ refers to elements higher than hydrogen and helium, with the bulk of a star like the Sun being made up of the latter two, while a scant 1.3 percent is given over to metals.

Ferraro’s team compared cooling white dwarfs in the two clusters and found that among the stars that will eventually become white dwarfs, the color of stars in the Horizontal Branch is bluer in M13 than in M3. The Horizontal Branch is a stage in the evolution of a star in which it has begun helium burning in the core, a stage that is flagged by a reduction in luminosity and increases in surface temperature. So the enhanced blue color in M13 is indicative of hotter stars on their way toward white dwarf status. 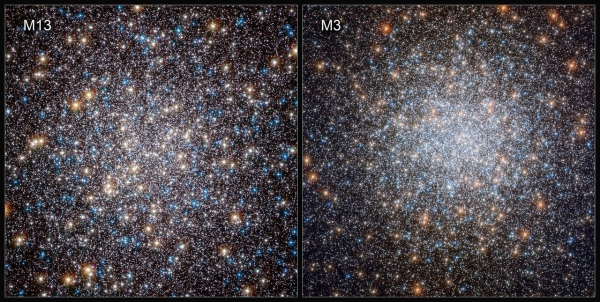 Image: To investigate the physics underpinning white dwarf evolution, astronomers compared cooling white dwarfs in two massive collections of stars: the globular clusters M3 and M13. These two clusters share many physical properties such as age and metallicity, but the populations of stars which will eventually give rise to white dwarfs are different. This makes M3 and M13 together a perfect natural laboratory in which to test how different populations of white dwarfs cool. Credit: ESA/Hubble & NASA, G. Piotto et al.

The researchers consider the M3 and M13 clusters to be “a classical horizontal branch (HB) morphology pair” because they share many physical properties including metallicity, making the color difference the salient feature. Homing in on the white dwarfs among this population, the team finds the outer envelope of hydrogen in these bluer white dwarfs allows them to burn for longer and cool more slowly than the standard white dwarf model. Using near-ultraviolet data from Hubble’s Wide Field Camera 3, the team compared more than 700 white dwarfs in the two clusters.

The result: M3’s white dwarfs follow the expected model, consisting of predictably cooling stellar cores and no stable thermonuclear activity. But in M13, two populations of white dwarfs can be found, the second being those that have retained an outer hydrogen envelope, continue thermonuclear burning and therefore cool at a slower pace. In fact, 70 percent of the white dwarfs in M13 appear to be burning hydrogen on their surface. This appears to be the only viable explanation for the ‘blue tail’ found in the Hubble data that distinguishes the two clusters.

At the moment, this [hydrogen burning on the surface] appears to be the most viable and natural explanation, while alternative scenarios should invoke ad hoc and unknown mechanisms able to increase the production or slow down the cooling process of the WDs in M13, and not in M3. The discovery reported in this paper represents the first direct evidence for the occurrence of stable nuclear burning in the residual hydrogen envelope of cooling WDs and offers an empirical measure of the delay in the flow of time marked by the WD clock in the presence of slowly cooling WDs.

The authors believe the road ahead should involve studying other clusters that show differences when at the Horizontal Branch of stellar evolution, while also examining clusters with different degrees of metallicity to determine the role it plays. Clarifying how white dwarfs evolve will force us to adjust the use of these stellar remnants in calibrating age, where current uncertainties can be as large as a billion years.

“Our discovery challenges the definition of white dwarfs as we consider a new perspective on the way in which stars get old. We are now investigating other clusters similar to M13 to further constrain the conditions which drive stars to maintain the thin hydrogen envelope which allows them to age slowly.”

Next post: Tracking Missing Ammonia on the Ice Giants