I try to keep my ear to the ground (rather than my eye to the sky) when it comes to SETI. What I mean is that there are enough scientists working SETI issues that it’s a challenge to know who is doing what. I try to track ongoing discussions even when, as at a conference, people keep ducking into and out of audibility. Hence the possibility of overlap in SETI efforts and, as Jason Wright points out in a discussion on his AstroWright site, the circulation of the same ideas without moving the ball forward.

This is hardly a new phenomenon, as a look back at my own grad school experience in a much different area reveals. I was a medievalist with an ear for language, and I was always struck by how compartmentalized we tended to be when discussing medieval linguistics. At that time, northern European tongues like Gothic, Old Icelandic, Anglo-Saxon and Old Saxon formed a scholarly thicket I happily wandered through, but in the absence of computerized resources back in the day, the Gothic scholars had a hard time keeping current with the Old Icelandic papers, and new work on the Anglo-Saxon alliterative line arrived mostly by rumor picked up at coffee time. These Germanic languages were definitely not talking to each other.

Bear in mind, that was a small, tightly focused community of scholars working on very esoteric stuff, and even then it was hard to keep up with the various strands of the tapestry. SETI’s problems are of a different sort. Here, the work is scattered across numerous journals and in particular, a wide range of disciplines — you might, for example, find a SETI paper in a journal of anthropology, well outside an astrophysicist’s normal range of sampling. Wright also makes the good point that SETI suffers from a lack of a curriculum, though he himself is working to change that at Penn State. What SETI does have going for it that my grad experience didn’t have is the proliferation of online resources, even if many are walled away like medieval monks behind monastic firewalls. Online access remains an emphatically moving target.

A useful paper that is helping to stabilize things is available on the arXiv site under the title “Furthering a Comprehensive SETI Bibliography.” It’s the background on the discovery process and categorization issues of an ongoing bibliographic update called SETI.news, which Centauri Dreams readers will want to know about. The newsletter began in 2016 as a way of gathering academic articles and occasional blog posts with high relevance to the SETI effort and I’m finding it indispensable.

The combined July/August SETI.news mailing is here, thanks to the efforts of Wright and Macy Huston. I should also mention while we’re talking about resource gathering that a bibliographic effort useful to those of us following interstellar exploration is available through the Interstellar Research Group. The database is searchable; updates appear every weekday. The IRG’s remit is obviously broad in scope, ranging through everything from propulsion issues to astrobiology, unlike the highly focused SETI.news. But I think both will be of interest to the Centauri Dreams audience. 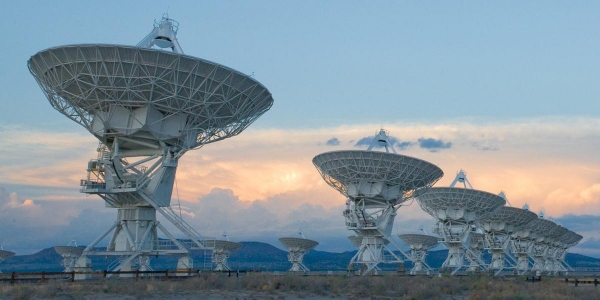 Image: The Very Large Array (VLA) is a collection of 27 radio antennas located at the NRAO site in Socorro, New Mexico, since early 2020 a participant in the hunt for technosignatures. Credit: Alex Savello/NRAO.

I don’t want to leave Wright’s interesting Strategies for SETI III: Advice post without mentioning his comments on the Fermi Paradox and the Drake Equation. He’s wondering whether we haven’t in some ways exhausted the discussion, quoting Kathryn Denning on the matter:

Thinking about that future [of contact with ETI] was itself an act of hope. Perhaps it still is. But I want to suggest something else here: that the best way to take that legacy forward is not to keep asking the same questions and elaborating on answers, the contours of which have long been established, and the details of which cannot be filled in until and unless a detection is confirmed. Perhaps this work is nearly done.

Have we driven the Fermi question into the ground? As per the earlier part of this post, it does seem that the discussion ranges around to the same issues without moving the ball forward, but then, a ball this theoretical is a hard thing to push down-field! The Drake Equation reliably gets an indignant rebuttal every now and then in my email from people who don’t realize that it is, as Wright points out, a heuristic tool that is designed to make us ponder the odds. So when someone writes me to point out that it is not possible to solve the equation, I think I’ll start quoting Wright’s comment:

[The Drake Equation is]…not a foundational equation like the Schrodinger equation from which one derives results, it’s more like a schematic map of the landscape to help orient yourself.

Schematic maps can be quite useful, and the Drake Equation has served its role. Everything in its place as we move forward. My own interest is more tightly focused on papers that can help with actual search efforts rather than theoretical ones, papers that, as Wright puts it, ‘stay close to the data.’ Which is not to underplay the sheer fascination of the topic, but only to say that the nuts and bolts have to be tightened and maintained, and a contribution like SETI.news is tangible and productive.