Hot Jupiters (notice I’ve finally stopped putting the term into quotation marks) were the obvious early planets to detect, even if no one had any idea whether such things existed. I suppose you could say Greg Matloff knew, at least to the point that he helped Buzz Aldrin and John Barnes come up with a plot scenario involving a planet that fit the description in their novel Encounter with Tiber (Grand Central, 1996), which was getting published just as the hot Jupiter 51 Pegasi b was being discovered. Otto Struve evidently predicted the existence of gas giants close to their star as far back as 1952, but it’s certainly true that planets like this weren’t in the mainstream of astronomical thinking when 51 Pegasi b popped up.

Selection effect works wonders, and it makes sense that radial velocity methods would bear first fruit with a large planet working its gravitational effects on the star it orbits closely. Today, using transits, gravitational microlensing, astrometry and even direct imaging, we’re uncovering a much more representative sample of what’s out there, and hot Jupiters are somewhere around 1 percent of the catalog. Similarly rare, I’m sure, are the planets classed as ultra-short period worlds (USP), though they’re much smaller, with radii in the range of 2 Earth radii and periods of less than a day. We now have evidence for somewhere around 100 of these planets.

Two recently discovered examples are the planet candidates TOI-1634b and TOI-1685b, both of them TESS catches and subsequently examined by the Subaru Telescope (Mauna Kea, Hawaiʻi), supplemented with data from other observatories. An international team of astronomers have been at work on this duo, led by Teruyuki Hirano (University for Advanced Studies, Tokyo). The planet candidates are in Perseus, the first about 114 light years away; the second is 122 light years out. Both have now been confirmed to be rocky super-Earths (and I’m no longer going to put that term in quotation marks either). Both are likewise USPs, with ultra-tight orbits of less than 24 hours. 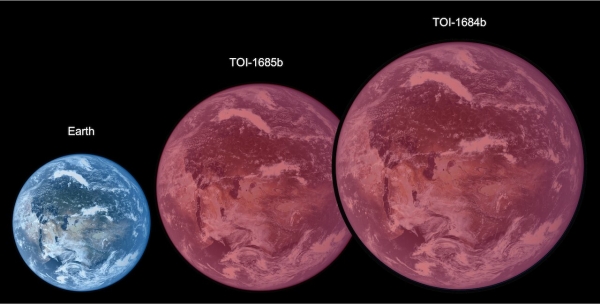 Image: Artist’s conceptual image showing the sizes of the planets observed in this study. The radius of TOI-1634b is 1.5 times larger than Earth’s radius and TOI-1685b is 1.8 times larger [note: the planets are mislabeled in the image]. The planets would appear red, due to the light from the red dwarf stars they orbit. Credit: Astrobiology Center.

As you’ll note from the caption above, the Subaru work (using the InfraRed Doppler — IRD — spectrograph mounted on the telescope) has been able to measure the masses of these transiting worlds. Here the chief interest is the fact that both lack a primordial hydrogen-helium atmosphere, which may or may not be the result of their proximity to their host stars.

Are there secondary atmospheres here, made up of gases released from within the planets? It’s an interesting speculation, as examining their constituents would tell us a lot about how these planets formed. The origins of USPs have been discussed in the literature in terms of inward migration, their highly circularized orbits the result of tidal interactions. There has been some suggestion that they represent remnant cores from hot Jupiters whose atmospheres have dissipated, but their hosts stars have different metallicity values than hot Jupiter host stars.

TOI-1634b and TOI-1685b, both of them orbiting M-dwarfs and relatively close to the Earth, may help us move forward in probing these issues, because to date there are few well characterized planets in the USP category; in fact, only the red dwarfs LTT 3780 and GJ 1252 have USP planets whose masses have been precisely measured. The authors note that TESS has been deeply involved in the hunt for more USPs, with 151 candidates announced as of February of 2021. 31 of these are known to orbit M-dwarfs.

The authors drew data from instrumentation ranging from Subaru itself to the MuSCAT imager at the Okayama Astro-Complex in Japan, the TCS telescope at Teide Observatory in Spain, the Gemini North telescope and Keck Observatory on Mauna Kea. Thus we’re examining data from ground-based transit photometry to high-resolution imaging, reconnaissance spectroscopy and radial velocity measurements, refining the orbital periods of these planets by more than an order of magnitude. Their future utility in atmospheric studies is clear. From the paper:

TOI-1634b is one of the largest and most massive USP planets having an Earth-like composition, and therefore, would become a benchmark target to study the formation and evolution history of massive USP planets. Both planets are listed among the best suitable targets for future atmospheric studies of small rocky planets by emission spectroscopy thanks to the brightness of the host stars, which encourages future characterizations using large aperture telescopes including JWST. Although small USP planets (< 2 R⊕) are likely to have lost the primordial atmospheres dominated by H2 and He, one may be able to probe and constrain the secondary atmosphere formed via the outgassing from the planet interior.