Enlarging Perspectives on Space (and Time)

How could it be otherwise? Journeys need maps and knowledge of conditions along the way. Thus we push into the fringes of interstellar space, and gradually extend our reach. As we do this, we inevitably produce changes in the way we perceive our place in the cosmos.

Cultural expectations about space have been shaped by what I might call a ‘planar’ approach to astronomy. First there is the Moon, then Mars, then the main asteroid belt, and so on, all of these things at increasing distances but roughly along the great disk of the ecliptic. In the 1950s science fiction film Rocketship X-M, a Moon mission misses its target through a series of odd misadventures and winds up landing on Mars. It was entertaining in its way as Lloyd Bridges and team explored the Red Planet, but it depicts a view of the Solar System in which if you go one distance, you’re at one target, and if you go another, you’re at the next. Never mind that the rocket’s mishap was entirely random and it could have gone anywhere.

Long-period comets and odd objects like Sedna teach us much about what goes on outside the ecliptic, but most deep space missions that have commanded the public’s attention have had destinations somewhere within it. The two Voyagers have a more complicated story given their gravitational encounters, Voyager 1 having taken a jog at Saturn to fly by Titan and thus propel itself out of the ecliptic on an interstellar trajectory, while its twin, Voyager 2, left the system and ecliptic in another direction after its encounter with Neptune. Neither was designed for interstellar operations but both now comprise our only live craft beyond the heliosphere.

As our missions become still more ambitious, we push into this wider, spherical realm of reference, which inevitably shapes public attitudes about our relationship with the galaxy. New Horizons’ mission to Pluto reminds us that the dwarf planet is at a 17° tilt to the ecliptic. Going to other stars would shed this culturally embedded planar concept, for the most part, though it’s interesting that one nearby destination, Epsilon Eridani, lines up well enough with the ecliptic to offer a boost from the angular momentum available to a departing craft. Alpha Centauri, well south of the ecliptic, demands a trajectory bend that loses this bit of assistance. This is a point APL’s Ralph McNutt made to me almost 20 years ago, as I was reminded recently in going through my notes from that period. 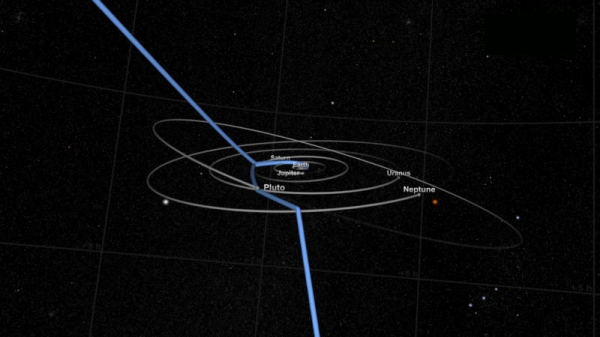 Image: Voyager 1 and 2 trajectories. Voyager 1 visited Jupiter and Saturn, and then veered northward off of the plane of our solar system. Voyager 2 visited all four giant planets of the outer solar system before departing southward toward interstellar space. Credit: NASA.

When we start contemplating interstellar missions, we have the chance to do what Voyager did just once, to look back at the Solar System, but this time in a much broader context. The focus will not be on the planets and the pale blue dot of Earth, but rather on the heliosphere, from a vantage well beyond its outer regions. Interstellar Probe is a heliophysics mission in its attempt to understand the Sun and planets as a system moving through the interstellar medium. It pushes perspectives as we visualize the entire Solar System as a moving, interacting environment where life can emerge.

The burgeoning catalog of exoplanets clearly plays into the concept, for we see thousands of stellar systems, each with their own context in what we can call an ‘astrosphere.’ The host stars we study, a tiny fraction of the several hundred billion in the galaxy, all move through plasma and dust within the interstellar medium. We have little enough information about how the Sun’s solar wind carves out the magnetic bubble surrounding our Solar System, but about astrospheres around other stars, we know next to nothing. Our view is flattened; we see their planets, or their circumstellar disks, our instrumentation not up to the challenge of seeing an astrosphere. 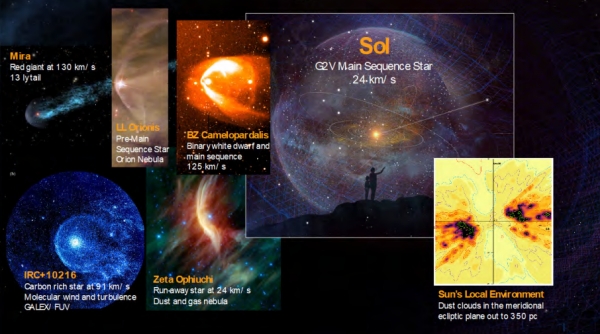 Image: This is Figure 3-1 from the JHU/APL report on Interstellar Probe from 2019; the latest report will be out in December. Caption: As our type-G2V star plows through the galactic interstellar medium, it forms the habitable astrosphere harboring the entire solar system we live in. Of all other astrospheres, one of our habitable type has never been observed, and yet we are only at the very beginning of uncovering our own. An interstellar probe through the heliospheric boundary into the LISM would enable us to capture its global nature and would represent humanity’s first step into the galaxy, where unpredictable discoveries await. Credit: NASA/Rosine Lallement, 2020.

Make no mistake, the crossing of the heliopause by both Voyagers has supplied us with data on the plasma physics at work in this region, while from inside the heliosphere, missions like IBEX have revealed unusual features that demand clarification. Interactions at heliosphere’s edge involve solar plasma, and magnetic fields both solar and interstellar, as well as neutral particles in the medium and galactic cosmic rays. Charge-exchange processes between interstellar hydrogen atoms and solar plasma protons shape the heliosphere as does the solar magnetic field pervading it.

A mission that gets to a vantage as distant as 1000 AU will be able to see these interactions from the outside, to determine the heliosphere’s overall shape and the distribution of plasma within it, even as missions like the upcoming IMAP (Interstellar Mapping and Acceleration Probe) study the heliosphere’s boundary from well within it. A probe into the interstellar medium would allow us to examine how the Sun’s activity cycle affects the heliosphere’s recorded shock and pressure waves, as found in Voyager data. Voyager has also shown that the heliosphere shields the Solar System from approximately 75 percent of incoming galactic cosmic rays, a factor in habitability.

But back to movement through the medium. Many interstellar clouds are found in what is called the Local Bubble,a region of hot gas that extends several hundred light years from the Sun. The conception of the Solar System as moving through interstellar clouds of varying dust, plasma and gas content backs out the field of view yet again. The Sun moves at 26 kilometers per second toward the edge of the Local Interstellar Cloud and will exit it in about 1900 years, and the question of what cloud we move through next is open. Fifteen interstellar clouds have been identified within 15 parsecs of our system.

Our Voyagers will run out of power somewhere in the range of 160 AU from the Sun, a long way from what astronomers consider the undisturbed local interstellar medium. Putting a probe well beyond this range would provide the first sampling of the interstellar medium that is unaffected by the heliosphere, and thus teach us a great deal about what our solar bubble moves through. As interstellar dust grains are the foundation of both stellar and planetary systems, they hold clues to the formation of matter in the galaxy and the evolution of stars. All this is applicable, of course, not just to our own heliosphere but the astrospheres around exoplanetary systems. 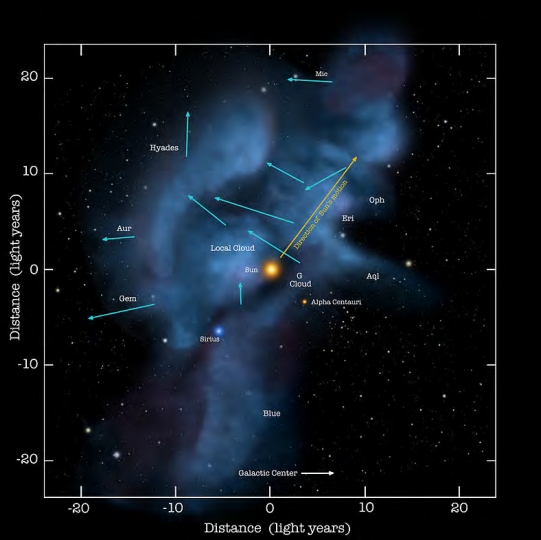 Image: This is Figure 3-10 from the JHU/APL report. Caption: The Sun is on the way to exiting the Local Interstellar Cloud and entering another unexplored interstellar region. Credit: NASA/Goddard/Adler/U. Chicago/Wesleyan.

A mission designed to be returning data 50 years after launch, expressly interstellar in its conception, also elevates our thinking about time as we confront operations long after our own demise. Such a mission puts the blip of our present existence into the context of galactic rotation, the chronological equivalent of the pale blue dot image.

Deeper awareness of ourselves as part of a great astrophysical complex that renders life possible helps to place us in a galactic setting. Going interstellar demands looking a long way out, but it also demands looking back, in our data and imagery, to understand the bubble within which we emerged. That shift in perspective in turn feeds the interstellar ambition, as we expand the frame of reference to other stars.

Next post: Interesting Transient: A New Class of Object toward Galactic Center?